Home » World News » ‘You can succeed at anything’: CEO’s message to Indigenous youth

Jadah Pleiter grew up thinking she could “do anything” in life – a belief she is passing to her own children.

She is happy her five children feel proud they are Indigenous. “They’re growing up thinking, ‘This is something we’re not only proud of in our house, but my friends at school are as well, and my identity is celebrated, rather than being something that you should try and hide.’ ” 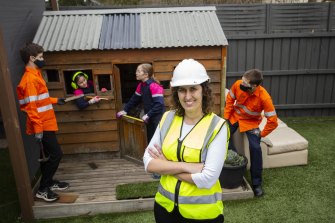 At the start of NAIDOC Week, Mrs Pleiter, who lives in Melbourne’s south-east, is telling her story as part of the Victorian government’s Deadly & Proud campaign.

She is the chief executive of a personal protective equipment (PPE) supply company Panku Safety Solutions, which has taken off during the COVID-19 pandemic.

Panku, which means “united, together” in the Nyiyaparli language of Mrs Pleiter’s ancestors in Western Australia’s Pilbara region, has supplied PPE such as masks, hand sanitiser and gloves to companies including National Australia Bank and Lendlease.

Mrs Pleiter was a council arts officer in 2016 when she and her husband, Michael Pleiter, started a first aid training and equipment supply business. That led to supplying PPE such as hard hats and gloves for the construction and infrastructure sector.

When the COVID-19 pandemic hit, there was an avalanche of orders for sanitiser, disposable masks, wipes and gloves from companies such as Telstra and John Holland, and from councils.

“While I was on the phone to one person I would miss from three to six calls,” Mrs Pleiter said. “It was impossible to keep up with them.“

She was also home-schooling four of her children (the fifth, who is 21, lives in Western Australia).

In mid-2020, Panku became a supplier for the Victorian departments of transport and justice. Mrs Pleiter says government Indigenous procurement policies meant Aboriginal businesses had more visibility and “access to opportunities to compete and demonstrate their capabilities”.

“It’s broken open the ground for us. It’s provided us with access and opportunity to participate in the economy, which I think is fundamental for Aboriginal people in taking our place in this nation.”

“We want to contribute and we want to grow and to be of value in our nation’s growth.

“It’s provided a way for us to start to explore our aspirations and provide opportunities for other Aboriginal people to develop that acumen and skill, and I guess to demonstrate what we can do, if given an opportunity, if given a chance.”

In the 1990s, while studying acting at the Victorian College of the Arts, Mrs Pleiter was hesitant to accept an Indigenous study allowance. But she was reminded of her great-grandmother, who didn’t get an education and worked as a servant without pay.

Mrs Pleiter said her aunty, Sally Morgan, the author of My Place, a famous 1987 autobiography exploring Aboriginal identity and past injustices, told her that mining in the Pilbara had helped build the nation, as had the labour of Aboriginal people, “and we haven’t seen the benefit”.

“My aunt Sally said, ‘These are your nanna’s wages.’ This is our entitlement, as a family, and you need to take that allowance, to get an education and change the future for the next generation.”

Mrs Pleiter, aged 12 when Morgan’s book came out, said it changed her expectations.

“Going to all the book launches and her art gallery openings and seeing her success and seeing her being interviewed on TV with grandma, I grew up with the belief that I could do anything.”

Another aunty, Helen Milroy, Australia’s first Indigenous medical doctor, was a commissioner to the Royal Commission into Institutional Responses to Child Sexual Abuse.

Mrs Pleiter said if a young Aboriginal person, or her own children, read her story, “I hope they see that they can do anything, and be successful, that they have the ability and the creativity, and there are pathways now that they can be supported to pursue their aspirations.”

She said previous generations of Indigenous people had the view that a business career was “something that rich white people did”.

“We didn’t have that literacy around business, in our communities. And a lot of that’s changed. There are so many fantastic Aboriginal businesses out there, really world-class businesses, and people have gone before me and prepared a way.”

Puppy chomps through £1,500 worth of clothing and furniture — including two sofas