WWII hero with no close family or friends is given the send off he deserves: Hundreds of mourners attend funeral of Royal Scots Fusiliers veteran, 98, after public appeal

Hundreds of mourners gave a World War Two hero who had no close family or friends the send off he deserved after an appeal for people to attend his funeral.

Maurice Winspear, 98, who served in the Royal Scots Fusiliers, spending four years on the front line in Italy on active service trying to end Mussolini’s fascist regime, passed away with no loved ones.

The veteran who also fought in Syria, Palestine and Egypt lived out his last 13 years at a care home in Middlesbrough before his death on May 13.

Funeral celebrate Sue Dicken who put out the appeal for people to attend his funeral said she was ‘completely overwhelmed’ by the amount of people that turned up yesterday.

And she added it was also a reflection of what the ‘brave and unassuming gentleman deserved’.

Bikers from the Eight & Aces, bag pipers and military standards lined the road and followed the solemn procession of his hearse as hundreds said their final goodbyes. 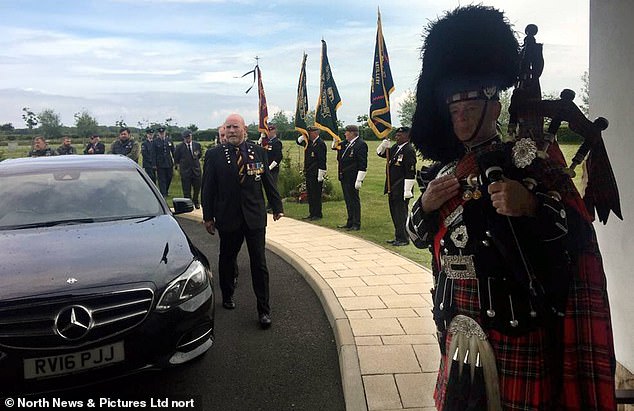 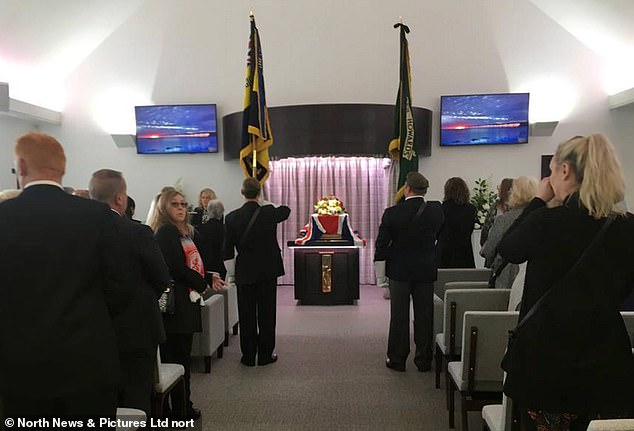 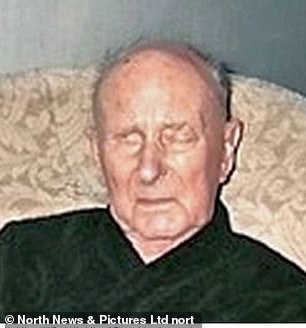 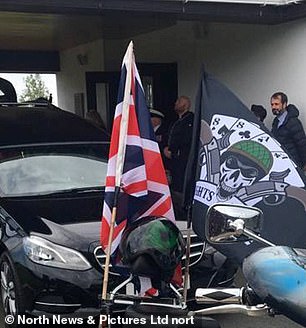 World War Two hero Maurice Winspear (left), 98, pictured who was given a huge send off by hundreds of mourners at his funeral yesterday. Flags and motorcycles (right) were seen as the funeral procession went passed

Ms Dicken said: ‘I was completely overwhelmed by the sheer volume of people in attendance.

‘I would like to take the opportunity to thank each and every person who took the time to pay their respects and be part of Maurice’s final goodbye.

‘Some might say it was the incredible power of social media. I prefer to believe it’s a reflection of true human kindness. For that I’m eternally grateful.’

His seaside home town of Whitby, where he was born in 1923, remained his favourite place as he loved the sea.

He joined the Army as a teenager and was part of the Sicily landings in 1943, a brutal campaign which earned him three Italian Star campaign medals.

He later served in Syria, Palestine and Egypt and when he returned bought a house in Redcar and started working as a fitter for United Bus Company before embarking on a career at British Steel.

After losing his sight, he moved to Upsall House Care Home, where he enjoyed listening to his cassettes of Bing Crosby.

No longer able to watch matches, the devoted Middlesbrough F.C. fan loved listening to the matches on the radio and as a nod to his love for Boro, one of its chants was played during the service. 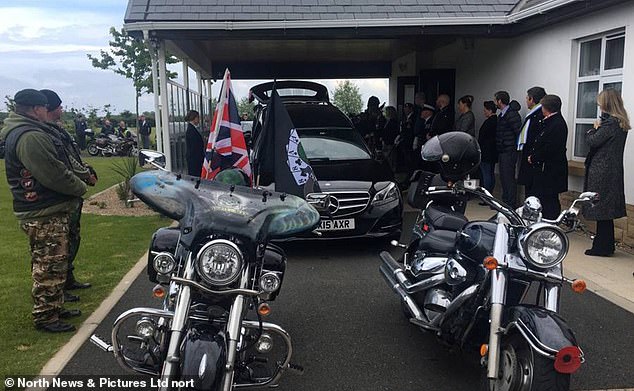 It’s said ‘old soldiers never die, they just fade away’ but Ms Dicken would not let that happen to Maurice. Pictured: Two bikes parked in front of the hears as mourners look on including two military men

Carers Charlotte Taylor and Bethany Younes, who work at Upsall House, spent a lot of time with Maurice and both were present at the service. Pictured: The funeral procession with hearse

‘This brave and unassuming gentleman deserved to be recognised and your attendance here has confirmed that.’

Carers Charlotte Taylor and Bethany Younes, who work at Upsall House, spent a lot of time with Maurice and both were present at the service.

Ms Taylor added: ‘It was his home and we were his family. He got the send-off he deserved.’ 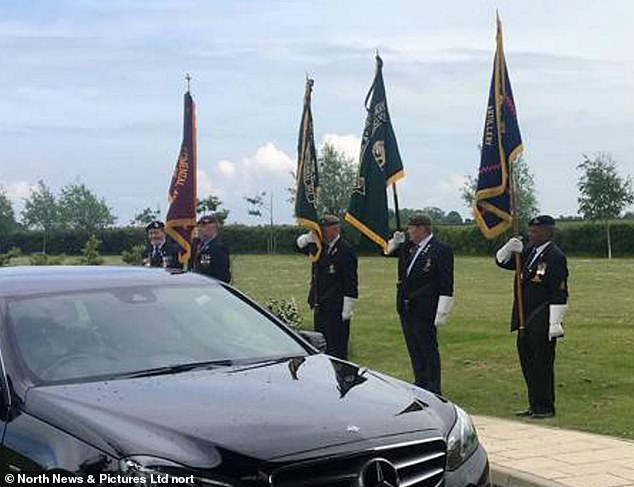 Major Pat Ralph, MM, chairman of the Yorkshire Regiment Association, said: ‘For me, I came along because of total respect for an individual like Maurice who did everything he could for his family, and his fellow countrymen and defended the country and the faith.

‘He was one of the lucky ones who managed to get through and see it through to the end.

‘A lot of his colleagues didn’t and we remember then on Remembrance Day, as we will remember Maurice this November.’

John Main, from Peterlee, who was one of the bikers from the Eight & Aces, said: ‘I’m a veteran myself so with Maurice not having any family to give him a send-off we wanted to.

‘We felt like it was our duty. I was amazed at the turnout.’

Traveller from Thailand is forced into £1,750 isolation