The medals of a Tommy who was killed at the Somme while dribbling a football across No Man’s Land in the ‘Great European Cup’ have emerged for sale.

Private John Buckle and his fellow members of the 8th Battalion East Surrey Regiment passed the balls to each other as they advanced on the German trenches on the first day of the Battle of the Somme in the First World War.

It was the idea of their superior, Captain Wilfred Nevill, who promised a reward to the first platoon to score a ‘goal’ in the enemy trenches during the famous push to capture Montauban Ridge, on July 1, 1916.

However, whilst the ridge, in northern France, was captured, both Private Buckle and Captain Nevill were killed in the daring raid. They were among 20,000 British troops who died on July 1 alone.

Two of the balls were recovered after the battle and one of them is still on display at the Queen’s Regimental Museum in Dover, Kent, while the other was destroyed in a fire at the Surrey Infantry Museum in 2015.

The East Surrey Regiment celebrated the return of one of the balls in a ceremony on July 21, 1916, at the regimental depot in Kingston, Surrey. 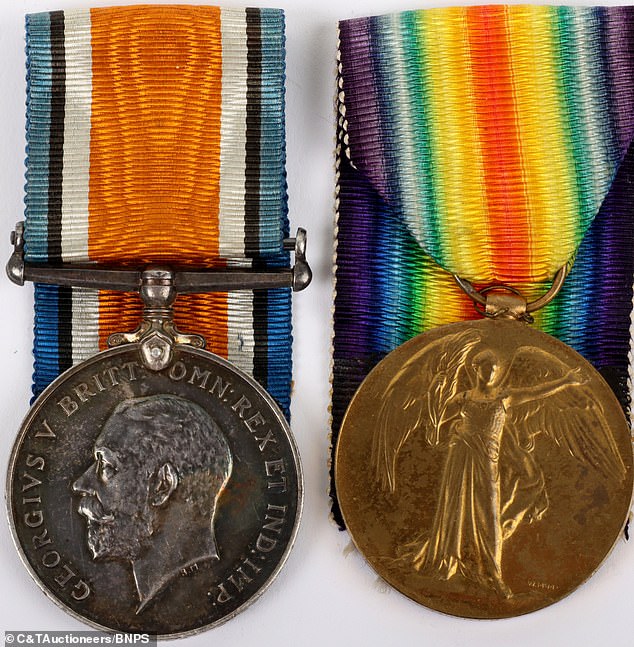 The medals of Private John Buckle, a Tommy who was killed at the Somme while dribbling a football across No Man’s Land in the ‘Great European Cup’, have emerged for sale. Above: British War Medal (left) and the British Victory Medal (right)

Private Buckle’s war medals have now been put up for sale at auction by a private collector.

As well as receiving the British War Medal and British Victory Medal, Private Buckle was also entitled to the 1914-15 star. He is remembered at the Thiepval Memorial in France.

Matthew Tredwin, director at C&T Auctioneers, of Ashford, Kent, said: ‘Many people are aware of the famous Christmas 1914 football match which took place, but less so the events on the first day of the Battle of the Somme. 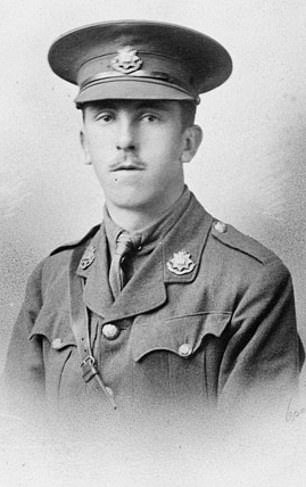 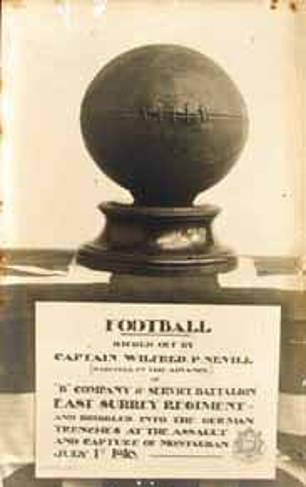 Captain Wilfred Nevill (pictured right) promised a reward to the first platoon to score a ‘goal’ in the enemy trenches during the famous push to capture Montauban Ridge, on July 1, 1916. Right: An image taken of one of the balls after it returned to the UK in 1916

‘Back in the UK at the time, this action was capitalised on by the newspapers and they used it to tell the heroic story of this battalion on which was a disastrous day.’

According to one account from the time, the words of ‘the Great European Cup’ were written on one of the balls and ‘no referee’ was written on the other – a message to the men ‘not to treat the Hun too gently.’

According to battle survivor Lieutenant C.W. Alcock, the words of the ‘Great European Cup’ and ‘East Surreys v Bavarians’ were written on the ball.

Quoted in the Daily Telegraph in 1916, he said that, on another of the balls, the words ‘NO REFEREE’ were printed in large capital letters. 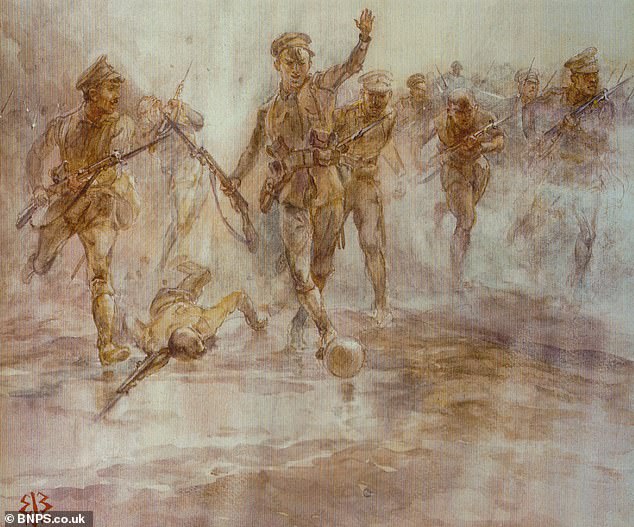 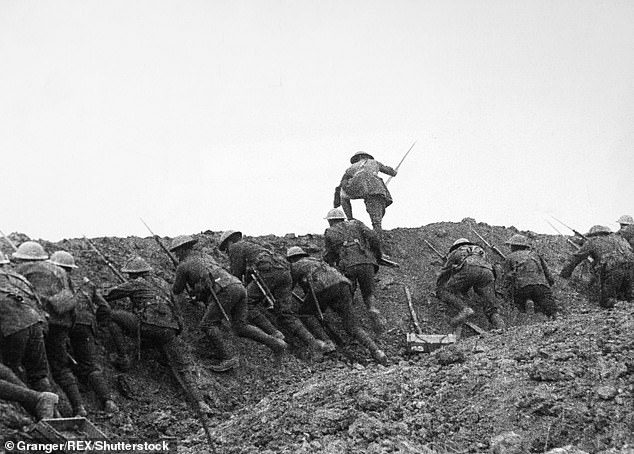 By the end of the Somme offensive against the German lines, which lasted for five months, more than a million men on both sides had died

This was a way of telling the men ‘they needn’t treat the Hun too gently’.

A letter written to Captain Nevill’s sister by Second Lieutenant Alcock, reads: ‘Five minutes before zero hour your brother strolled up in his usual calm way and we shared a last joke before going over.

‘The Company went over the top very well, with Soames and your brother kicking off with the Company footballs.’

The letter is among other items held by the Surrey Infantry Museum.

By the end of the Somme offensive against the German lines, which lasted for five months, more than a million men on both sides had died.

The medals will go on sale tomorrow for £550.

Battle of the Somme: One of the deadliest fights in history

Lasting 141 days, the Battle of the Somme was the bloodiest battle of the First World War.

It is estimated 24,000 Canadian and 23,000 Australian servicemen also fell in the four-month fight.

The British and French joined forces to fight the Germans on a 15-mile-long front, with more than a million-people killed or injured on both sides.

The Battle started on the July 1, 1916, and lasted until November 19, 1916. The British managed to advance seven-miles but failed to break the German defence.

On the first day alone, 19,240 British soldiers were killed after ‘going over the top’ and more than 38,000 were wounded.

But on the last day of the battle, the 51st Highland Division took Beaumont Hamel and captured 7,000 German prisoners.

The plan was for a ‘Big Push’ to relieve the French forces, who were besieged further south at Verdun, and break through German lines.

Although it did take pressure off Verdun it failed to provide a breakthrough and the war dragged on for another two years.