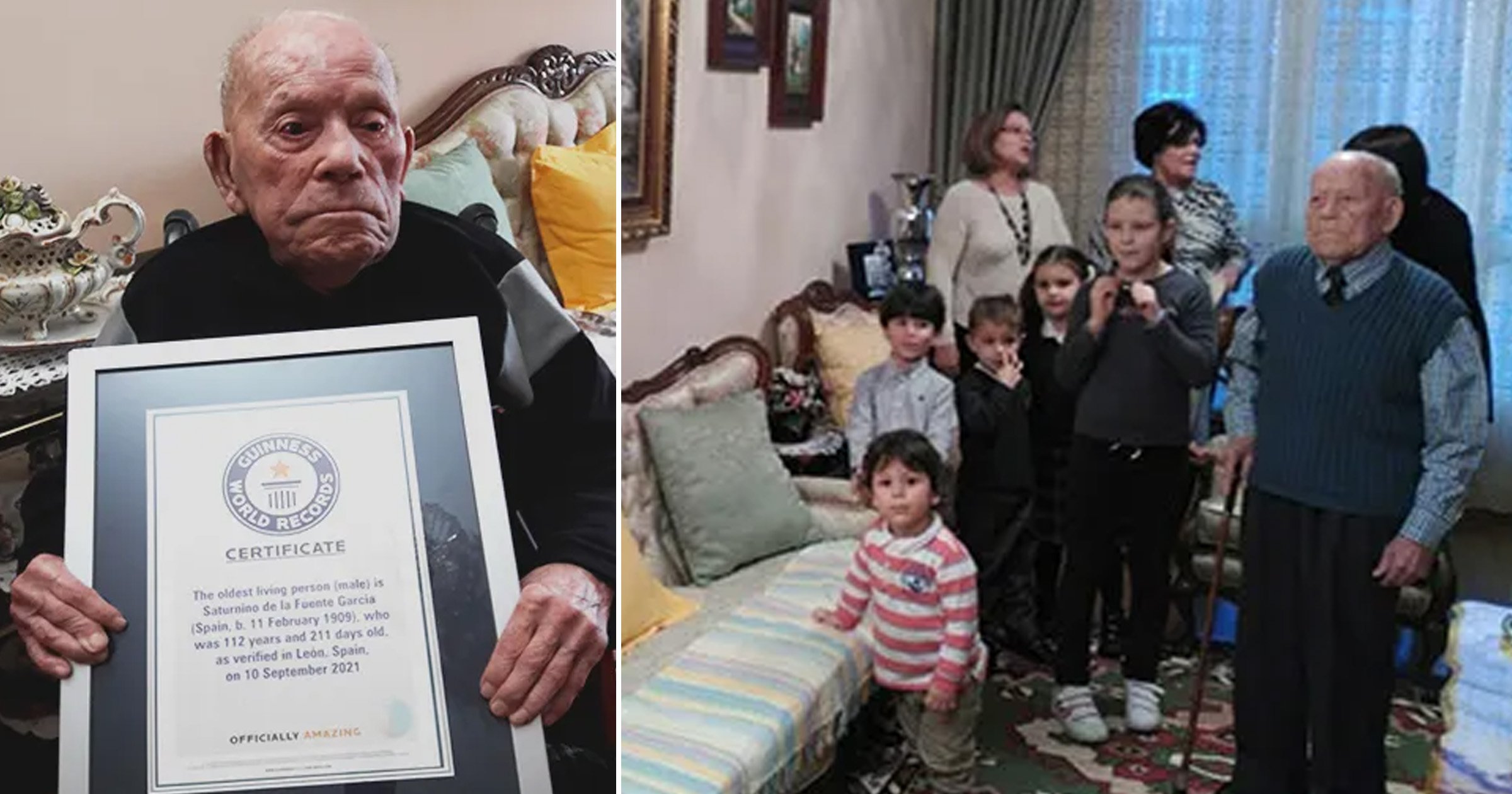 A Spaniard holding the Guinness World Record for world’s oldest man has died at the age of 112.

Saturnino de la Fuente, passed away at his home in the northern Spanish city of Leon yesterday morning.

The dad-of-eight was less than a month away from his 113th birthday at the beginning of February.

The retired shoemaker was confirmed as the world’s oldest man by the Guinness Book of Records in September last year.

When asked for the secret of his longevity, he replied: ‘A quiet life and not hurting anyone’.

Saturino and his wife Antonina Barrio had one son and seven daughters, but their only boy died while he was still a child.

The couple went on to have 14 grandchildren and 22 great-grandchildren. Saturino was due to celebrate his birthday with his family on February 8.

This is the day he claimed to have been born, but official records say his date of birth was three days later.

Saturnino survived the Spanish flu pandemic, having been struck down with the illness when he was five years old.

He later became a poster boy for the Covid vaccine after becoming the first person to receive the jab in the region of Castilla y Leon.

Saturnino had a scrape with death the day before Christmas Eve, 1937, during the Spanish Civil War.

He found himself trapped under rubble as a German plane sent by Hitler to support Franco crashed into a residential building.

Saturnino was pulled from the wreckage and survived, but three others were killed including two young girls.

He had avoided being enlisted into the war because he was too short, at less then five feet.

Saturnino had set up a successful shoemaking business and ended up making boots for the Spanish Army.

A passionate football fan, Saturnino played with the Puente Castro football team from the age of 18.

He was one of the founding members of the club, who still see him as their ‘number one honorary member’, the Olive Press reports.

On its Facebook page, the club said Saturino would always be ‘remembered with love’, adding: ‘We join in the grief of your loss and send our condolences to your loved ones.’

His other local club, Cultural y Deportivo Leonesa, tweeted: ‘We’re saddened by the death of Saturnino de la Fuente, the oldest man in the world, and will remember him with great affection.

‘We share the pain of his loss and we would like to express our condolences to his family and friends.’

Saturnino was affectionately nicknamed ‘El pepino’ a familiar version of Peña, the name of his mother.