There is an irony in the fact that a Labor government that introduced a human rights act now presides over the fastest growing police state in Australia. As an Age investigation has revealed, alongside a massive prison expansion, Victoria’s police funding has doubled from $2 billion to $4 billion in 10 years.

There has, however, been no increase in accountability. Victoria has one of the least accountable police forces in Australia. There is no monitoring to ensure that the everyday use of powers is legal, justified and non-discriminatory. Furthermore, the police complaint system is an unmitigated disaster as disclosed in recent submissions by community legal centres and lawyers across Victoria to the Victorian government. 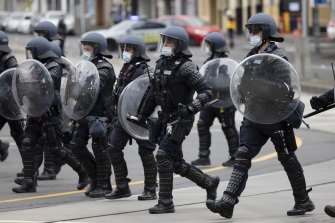 Police turn out for what ended up being several days of protests by construction workers in September this year.Credit:Wayne Taylor

Thoughtfully, former police chief commissioner Christine Nixon asked The Age, “what do you want us to stop doing?” Let’s unpack an answer.

Police contact with the community does not reduce crime. Repeated studies show that police contact is criminogenic – likely to cause criminal behaviour. Police use stop, question, search, intimidation, force, threats and arrest to respond to social problems. Overwhelmingly these problems are better solved through understanding, empathy and properly resourced solutions.

Police are now operating in schools and in youth centres. They run operations that target racialised communities, they are overwhelming the first responders to homelessness, begging, drug use, mental health and public health crises. Despite a history of racial profiling in the area, it was 500 police who responded to the hard lockdown of the Flemington and North Melbourne high rises, not health professionals and welfare workers.

“Order maintenance” and social crisis management are the primary day-to-day functions of the police. Yet as US policing scholar Leon Bittner has written, “Fearing the role of the nurse, or worse yet, the role of the social worker, the policeman [sic] combines resentment against what he [sic] has to do day-in-day-out with the necessity of doing it.” In 2021 Victoria Police Association head Wayne Gatt agreed with this sentiment: “the best people to deal with mental health crisis” aren’t the police.

If the primary functions of the police are precisely those functions they are ill-equipped to perform, the solution to over-policing comes squarely into focus. And it’s not about police training. Governments must fund public health, youth and social workers, people trained to work with community, to find long-term solutions to social issues without imposing the threat of criminal sanctions.

Solutions include funding adequate, long-term housing; basic income; and wrap-around mental healthcare. Community-controlled strategies can be based on the principles of the rights to housing, an income, healthcare, education, opportunity, equity and self-determination.

While funding social, economic, and cultural rights, doesn’t square with neo-liberalist notions of the role of the state, by failing to adequately fund these rights, governments leave the management of the consequences of structural inequality to the police and their criminalising tools. Hence the need for more police and prisons. Not only do these expensive options fail to achieve positive social outcomes, they entrench harm as well as racial and other forms of discrimination.

It is time we reduced the grip police occupy in the public and political imagination that they are the solution to social problems. Police occupy a glorified, hero-symbolised role in society. And yet the heroic work is done by teachers, social workers, carers, health workers, families and communities. The glorified image of police makes it hard for sensationalist media outlets to sensibly discuss a reduction in the role of police.

However, as British criminologist Ben Bowling and others note, the presumption that “the police are a functional prerequisite of social order and that without a police force chaos would ensue … is an unwarranted ideological assumption”.

In Melbourne’s CBD, Youth Projects have for years funded Foot Patrol, a team who work with vulnerable people including injecting drug users and the homeless, solving problems and making referrals with no threat of criminalisation. In Glasgow, violence is being treated as a public health issue in a series of strategies aimed at decreasing violence, not criminalisation. Programs such as Jesuit Social Service’s Manbox address patriarchal beliefs that lead to violence and aggression. Pursuing Treaty and compensation will start to address the intergenerational trauma of invasion and subsequent atrocities. These strategies and many more, lead to a safer community, without recourse to police and prisons.

Vast majority of people being hospitalised with Covid are unvaccinated