WHO workers sexually abused women and girls while tackling Ebola outbreak in DR Congo: Victims were ‘ambushed’ in hospitals and forced to have sex, report finds

Twenty-one WHO workers sexually abused women and girls while tackling the Ebola outbreak in the Congo, with victims ‘ambushed’ in hospitals and forced to have abortions by their rapists.

The abuse was carried out by Congolese and international workers between 2018 and 2020 during the epidemic in which 2,000 people died.

An independent commission found that 21 of the 83 alleged perpetrators were employed by the WHO.

Some of the victims said they were plied with drink, while others said they were coerced into having sex by a doctor who promised them a job. The youngest was just 13-years-old.

Several women fell pregnant because their attackers did not use contraception, and two victims said the men forced them to have abortions. 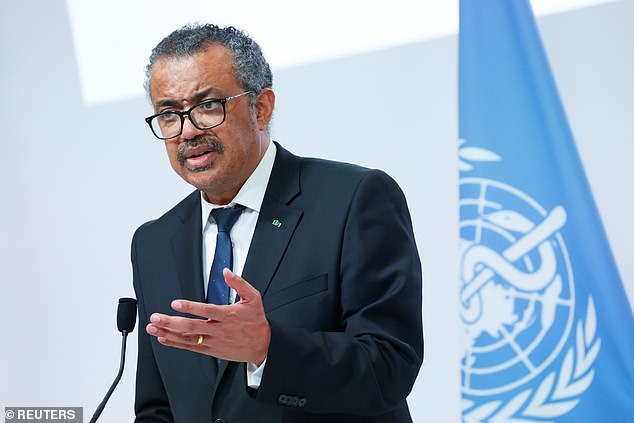 WHO Director-General Tedros Adhanom Ghebreyesus speaks during a news conference after a ceremony for the opening of the WHO Academy, in Lyon, France, on Monday 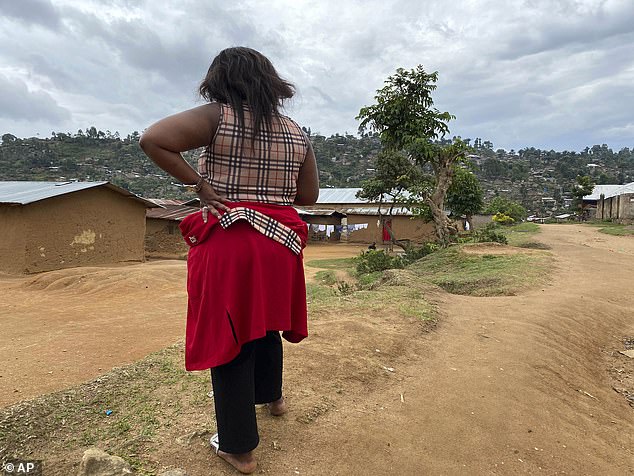 Shekinah, a young Congolese woman who claimed she accepted an offer to have sex with WHO doctor Boubacar Diallo in exchange for a job, said she hoped he would be sanctioned by the UN health agency and barred from working for it again 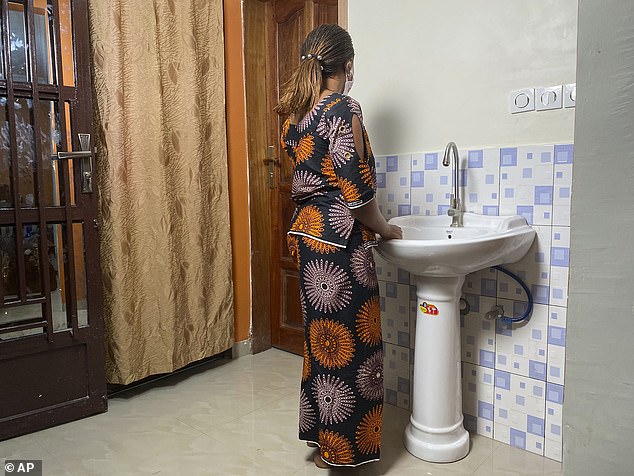 ‘I have been waiting for this big moment for more than a month to see how WHO will sanction these (doctors),’ said Anifa, another woman who alleged she received a similar sex-for-jobs offer from Diallo. ‘We would like to see justice done.’

WHO chief Tedros Adhanom Ghebreyesus called the report ‘harrowing’ reading and a ‘dark day’ for the UN health agency.

‘I’m sorry for what was done to you by people who are employed by WHO to serve and protect you,’ he said at a news conference on Tuesday. ‘It is my top priority that the perpetrators are not excused, but held to account.’

The probe was prompted by an investigation last year by the Thomson Reuters Foundation and The New Humanitarian in which more than 50 women accused aid workers from the WHO and other charities of demanding sex in exchange for jobs between 2018-2020.

‘This is the biggest finding of sexual abuse perpetrated during a single U.N. initiative in one area or one country during the time-bound period of a U.N. response effort,’ said Paula Donovan, co-director of the Code Blue Campaign, which is campaigning to end sexual exploitation by U.N. peacekeepers.

The youngest of the alleged victims, identified in the report only as ‘Jolianne’ and believed to be 13, recounted that a WHO driver stopped on a roadside in the town of Mangina where she was selling phone cards in April 2019 and offered to give her a ride home.

‘Instead, he took her to a hotel where she says she was raped by this person,’ according to the report.

The panel recommended WHO provide reparations to victims and set up DNA testing to establish paternity and enable women to assert their rights and those of their children. 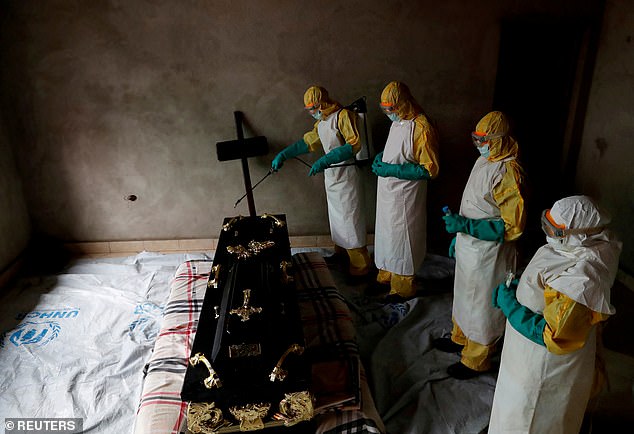 The probe was prompted by an investigation last year by the Thomson Reuters Foundation and The New Humanitarian in which more than 50 women accused aid workers from the WHO and other charities of demanding sex in exchange for jobs between 2018-2020. Pictured: A health worker sprays a room during a funeral of an Ebola victim in the DRC in 2018

Tedros said four people have been fired and two placed on administrative leave as a result of the scandal, but he did not name them.

The WHO chief also declined to say if he would consider resigning; Germany, France and several other European countries nominated Tedros for a second term last week.

Lawrence Gostin, chair of global health law at Georgetown University, said he wouldn’t call for Tedros to resign unless he knew of, or could have reasonably known of such abuse.

Tedros traveled to Congo 14 times during the outbreak, repeatedly said he was personally responsible for the response and publicly commended one of the alleged rapists for his heroic work.

‘It is unconscionable that this should ever have happened, and the sheer scale of the sexual assaults is shocking,’ Gostin said.

The panel’s investigators said they identified 83 alleged perpetrators of sexual abuse and exploitation, both Congolese nationals and foreigners.

In 21 cases, the review team established with certainty that the alleged abusers were WHO employees during the Ebola response.

The AP published evidence in May showing that Dr. Michel Yao, a senior WHO official overseeing the Congo outbreak response was informed in writing of multiple sex abuse allegations.

Yao was later promoted and recently headed WHO’s response to the Ebola outbreak in Guinea, which ended in June.

WHO doctor Jean-Paul Ngandu and two other agency officials also signed a contract promising to buy land for a young woman Ngandu allegedly impregnated; Ngandu told the AP he was pressured to do so to protect WHO’s reputation.

The panel said that during its interview with Tedros, he said he was made aware of the sex abuse allegations when they were revealed in the press and had not heard of the incident involving Ngandu until the AP published its story.

When informed of Ngandu’s alleged misconduct, Mlitzke and Webb attempted to determine if the woman accusing the doctor of impregnating her should be designated as a ‘beneficiary,’ given her legal contract with Ngandu.

Webb said no investigation was needed since the issue had been settled with an ‘amicable agreement.’

Shekinah, a young Congolese woman who accepted an offer to have sex with WHO’s Boubacar Diallo in exchange for a job, said she hoped he would be sanctioned by the U.N. health agency and barred from working for WHO again. 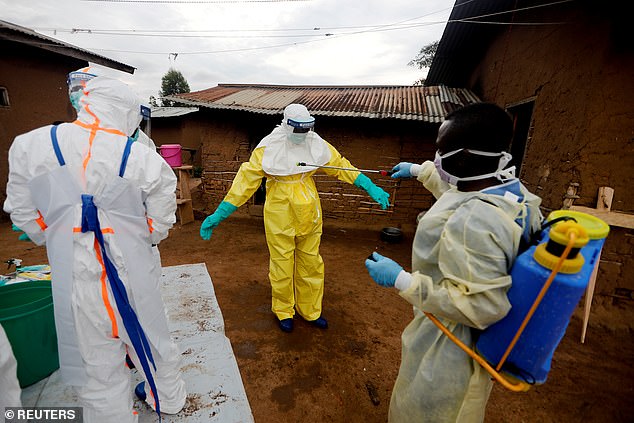 ‘I would like him and other doctors who will be charged to be punished severely so that it will serve as a lesson to other untouchable doctors of the WHO,’ said Shekinah, who declined to give her last name for fear of retribution.

Julie Londo, a member of the Congolese Union of Media Women, a women’s organisation that works to counter rape and sexual abuse of women in Congo, applauded WHO for punishing staffers involved in the abuse allegations but said more was needed.

‘WHO must also think about reparation for the women who were traumatised by the rapes and the dozens of children who were born with unwanted pregnancies as a result of the rapes,’ she said.

Sophie Harman, a professor of international politics at Queen Mary University London, said she was concerned the allegations involving more than 80 suspects were only the beginning.

‘More cases are bound to come forward across the world,’ Harman said, calling for the focus to shift to helping abuse survivors.

‘This requires both prosecution of perpetrators, but full accountability on the part of WHO leadership who knew about the rumours and reports, and yet took years to act on this issue.’

Chiropractor who broke ex-bank manager's neck is blasted by family