San Francisco: An Israeli firm accused of supplying tools for spying on human-rights activists and journalists now faces claims that its technology can use a security hole in WhatsApp, the messaging app used by 1.5 billion people, to break into iPhone and Android phones.

Security researchers said they had found spyware — designed to take advantage of the WhatsApp flaw — that bears the characteristics of technology from the company, the NSO Group. 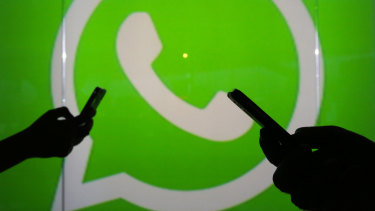 WhatsApp is urging users to update their app.Credit:Bloomberg

WhatsApp engineers worked around the clock to patch the vulnerability and released a patch on Monday, Israel time. They encouraged customers to update their apps as quickly as possible.

"WhatsApp encourages people to upgrade to the latest version of our app, as well as keep their mobile operating system up to date, to protect against potential targeted exploits designed to compromise information stored on mobile devices," the Facebook-owned company said in a statement.

The spyware was used to break into the phone of a London lawyer who has been involved in lawsuits that accused the company of providing tools to hack the phones of Omar Abdulaziz, a Saudi dissident in Canada; a Qatari citizen; and a group of Mexican journalists and activists, the researchers said. There may have been other targets, they said.

Digital attackers could use the vulnerability to insert malicious code and steal data from an Android phone or an iPhone simply by placing a WhatsApp call, even if the victim did not pick up the call. As WhatsApp's engineers examined the vulnerability, they concluded that it was similar to other tools from the NSO Group, because of its digital footprint.

The lawyer, who spoke on the condition of anonymity because he feared retribution, said he had grown suspicious that his phone had been hacked when he started missing WhatsApp video calls from Norwegian telephone numbers at odd hours. The lawyer contacted Citizen Lab at the Munk School of Global Affairs at the University of Toronto, which has helped uncover the use of NSO Group products in attacks on journalists, dissidents and activists.

Ten days ago, as Citizen Lab was looking into the incident, engineers at WhatsApp discovered what they described as abnormal voice calling activity on their systems, said a WhatsApp employee familiar with the investigation, who spoke on the condition of anonymity because the investigation was continuing.

WhatsApp alerted human-rights organisations about the threat and learnt from Citizen Lab that the vulnerability had been used to target the lawyer.

WhatsApp said it had alerted the US Justice Department to the attack. The WhatsApp flaw was first reported on Monday by The Financial Times.

The products of the NSO Group, which operated in secret for years, were found in 2016 as part of a spying campaign on the iPhone of a now-jailed human-rights activist in the United Arab Emirates through undisclosed Apple security vulnerabilities. Since then, the NSO Group's spyware has been found on the iPhones of journalists, dissidents and even nutritionists.

The company has long advertised that its products are sold to government agencies solely for fighting terrorism and aiding law enforcement investigations.

The NSO Group said in a statement that its spyware was strictly licensed to government agencies and that it would investigate an "credible allegations of misuse." The company said it would not be involved in identifying a target for its technology, including the lawyer at the centre of the latest accusations.

NSO's response is consistent with previous responses from the Israeli firm, which claims to have an in-house ethics committee that decides whether or not to sell to countries based on their human-rights records.

But increasingly, NSO's spyware has been discovered in use by governments with questionable human-rights records like the United Arab Emirates, Saudi Arabia and Mexico.

The Israeli company sold a stake to Novalpina, a British private equity firm, in a leveraged buyout deal last year that valued it at nearly $US1 billion ($1.4 billion).

The firm has been on a public-relations campaign in recent months to show its value to law enforcement, and has cited several examples of its spyware's being used, it says, to capture drug kingpins and to stop terrorist attacks.