Meaghan Alves was determined not to have an epidural during the birth of her son last year, but as soon as she arrived at hospital she begged for one because of the pain.

Her partner suggested she try nitrous oxide – often called laughing gas – instead of the pain-blocking injection. 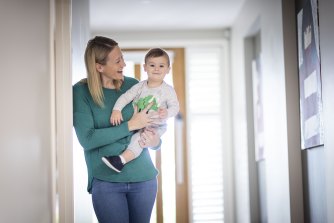 “It 100 per cent got me through,” Alves said. “It definitely took the edge off. [I had it] right up to the 10-centimetre mark, and when they took it off me, I was ready to push him out.”

About 60 per cent of Australian mothers use the gas – considered safer for them and their babies than pharmacological alternatives – while giving birth.

However, a new report in an anaesthetist publication says women should be made aware of its environmental impact when considering its use as pain relief.

The report, in the latest edition of Australasian Anaesthesia, a peer-reviewed publication from the Australian and New Zealand College of Anaesthetists, says if women and their midwives and doctors were aware of its carbon footprint, its use would decrease.

“While it may be innocuous for the pregnant woman and unborn baby, that is certainly not the case for the environment,” says the report, titled “Nitrous oxide use on the labour ward: efficacy and environmental impact”.

“By educating medical staff and pregnant women about the carbon impact of N2O … we can reduce greenhouse gas emissions from the labour ward and help to mitigate the effects of climate change.”

The report suggests women use a pain relief option with lower emissions, such as epidurals, opioids or non-medical interventions including hypnobirthing or massage.

Kellie Wilton, principal midwifery officer at the Australian College of Midwives, said mothers already experienced enough shame when making parenting choices. “Efforts would be better used in researching alternative methods or providing hospitals with evidence around how they can make changes, not guilting or putting it on the women to make better choices,” she said.

She said while epidurals and opioids crossed into babies’ placentas, nitrous oxide did not.

The climate impact of laughing gas is no joke. Molecule for molecule, nitrous oxide is about 300 times as potent as carbon dioxide at heating the atmosphere, according to a 2020 study published in journal Nature.

It is the third most emitted greenhouse gas, behind carbon dioxide and methane, according to the World Meteorological Organisation, with scientists estimating it is responsible for roughly 7 per cent of emissions.

The report says 1 per cent of those emissions come from anaesthetic use, most of that from maternity wards.

According to figures compiled by the report’s authors, intermittent use of nitrous oxide for four hours during labour creates the same carbon footprint as driving almost 1500 kilometres. By comparison, the report says, an epidural creates a six-kilometre impact.

The authors found about 40 per cent of women who use nitrous oxide go on to have an epidural. But for other women, such as Alves, the gas helps them feel in control of their pain.

Alves said she wanted to start trying for a sibling for River at the end of the year, and hoped to be able to use the gas again.

“Are we guilting women into not using it? That doesn’t sit right with me at all,” she said. “If someone sat me down when I was heavily pregnant and said, ‘If you do take gas, it is going to contribute to all these carbon emissions,’ I would feel really weird about the whole thing.”

Anaesthetist Dr Alice Gynther, a co-author of the report, said the intention was not to make women feel guilty. “We very much believe that women should make autonomous choices about their pain relief, according to factors important to them,” she said.

Gynther said nitrous oxide was a mild painkiller and had significant side effects such as dizziness, nausea and vomiting.

“Given that it’s not a fantastic drug, and it has this climate impact, we think it’s worthwhile explaining … the potential risks in an informed consent discussion,” she said.

Gynther added that more alternative non-pharmacological options should be provided, such as wider and easier access to TENS (transcutaneous electrical nerve stimulation) machines and water immersion.

The report says that when nitrous oxide destruction systems were introduced in Swedish hospitals, the carbon footprint from the gas was halved.

Nitrous oxide is also used in dentistry and is misused recreationally.

The Royal Australian and New Zealand College of Obstetricians and Gynaecologists was contacted for comment.

Chicago alderman says CPD has lost 1,000 cops in just few years, city does 'not support them'