A WINTER storm could see 10 feet of snow dumped in California this Christmas.

Officials have warned the Sierra Nevada could see 5 to 8 feet of snow through the holidays, with 10 feet possible at higher elevations. 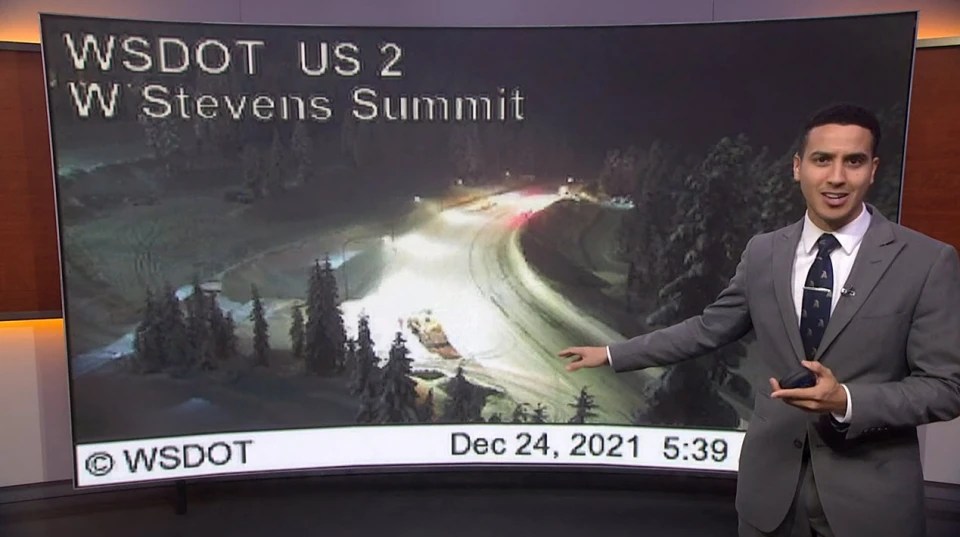 Authorities urged people to avoid traveling through the mountain passes, which could be treacherous.

That came after two people died in a submerged car in a flooded underpass in Millbrae, just south of San Francisco.

Seattle and Portland are also facing the rare chance of snowy streets as a wave of storms rolled through the West.

An atmospheric river — a sky-born plume of moisture from the Pacific Ocean — was fueling the weather.

It could mean rain and snow over much of the region through Christmas, while the Pacific Northwest was looking at a dayslong cold snap.

In the Sierra Nevada, an evacuation warning was issued for about 150 homes downstream of Twain Harte Lake Dam after cracks were found in granite.

The National Weather Service tweeted: "A series of Pacific storms will bring periods of heavy low elevation rain and heavy mountain snow to the Western U.S. through the Christmas weekend."

In Southern California, evacuation orders were issued on Thursday night in Orange County because of possible mudslides and debris flows in three canyons where a wildfire last December burned the ground bare.

The Orange County Fire Authority reported a mudslide on Thursday night in one canyon that affected some roads but no injuries were reported.

The area saw flooding in a storm last week and several homes were red-tagged.

Steve Learned left the area Thursday morning after doing what he could to protect his home.

“The last storm just killed us, buried our road,” he told KABC-TV. “My street turned into a creek bed about 2-and-a-half feet deep with rocks and mud. I hope it doesn’t do it again.”

The Pacific Northwest was facing frigid temperatures and measurable snow was possible in both Seattle and Portland, forecasters said.

“This is a rare event,” Wolcott said Thursday. “It’s been years since those of us at the weather service in Seattle have seen forecast data like this.”

“If you don’t have to go out, don’t go out,” Seattle Mayor Jenny Durkan said.

She urged people to check on neighbors and pets and help to keep sidewalks clear of snow and ice.

Oregon Gov. Kate Brown issued a state of emergency declaration on Thursday evening to remain in effect through January 3.

She said officials expect snow and sustained temperatures below freezing could result in critical transportation failures and disruptions to power and communications infrastructure.

Holiday travel will likely be affected by multiple rounds of rain, mountain snow, and gusty winds.

The National Weather Service is urging people to be prepared and give themselves plenty of time when traveling for the holidays.

“Driving safely in #winter weather can be a challenge for even the most experienced driver,” read a tweet from the California Highway Patrol.

“Regardless of the weather conditions, slow down. Vehicles can’t stop as fast or turn as accurately on wet, snowy, or icy pavement. Decreased visibility is also a possibility.”

The storms do have a bright side by increasing mountain snowpacks that provide a substantial amount of water when they melt.

Long-term drought conditions continue to blanket nearly 94% of the West, according to the National Weather Service Climate Prediction Center.

HAS CALIFORNIA EVER HAD A WHITE CHRISTMAS

Neither San Francisco nor Los Angeles has ever had a White Christmas but it has snowed in winter.

San Francisco has had four snow days in recorded history, though none have occurred in the past several decades.

On December 11, 1932, 0.8 inches of snow fell in the city. The last recorded snowfall in San Francisco was on February 5, 1976, but it wasn’t recorded how many inches fell that day.

Pregnant Good Samaritan, 19, kicked unconscious by gang of teens who stamped on her face after she defended bullied girl outside Sainsbury's

Mexico worries about scorn if another drug lord is released