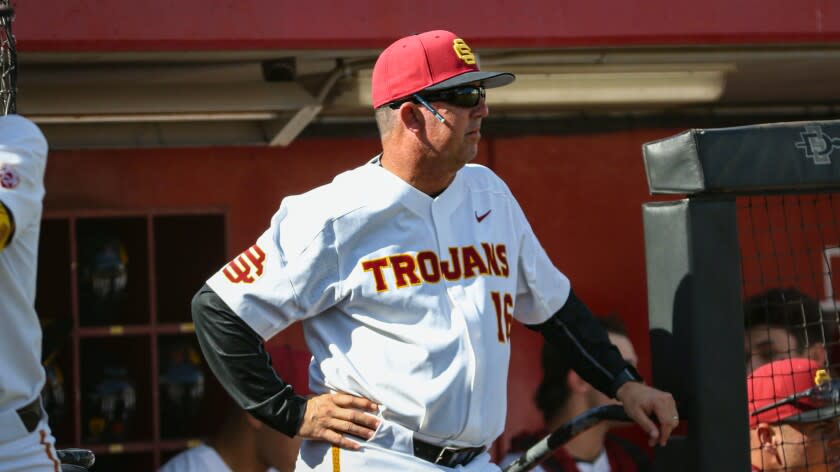 After three turbulent years atop one of college baseball’s proudest programs, Jason Gill is out as USC’s baseball coach.

Gill was fired by USC on Monday, two weeks after the Trojans finished last in the Pac-12 Conference and more than a year after the university opened an investigation into his conduct. D1Baseball first reported that USC planned to fire Gill, but nothing was made official until Monday, when baseball players and staff were asked to meet to discuss the program.

“I enjoyed my time at USC and appreciated the opportunity to lead its baseball program,” Gill said in a statement released by the university. “I am excited to see what the future holds for me and my family, and I wish the players and the program the best.”

The university’s investigation into Gill remained ongoing as USC limped to a 25-28 overall record and 8-22 mark in the Pac-12, losing seven of its last eight games to miss the inaugural conference tournament. The unrest within the program continued to simmer as well, players, parents and some staffers taking issue with Gill and his leadership. A person familiar with the situation who was not authorized to speak publicly about it told The Times that multiple players intended to leave if Gill remained.

The most storied program in college baseball history, with 12 NCAA titles, now finds itself without a coach for the fifth time in 16 years. Over that miserable stretch, USC made just a single NCAA regional (2015) while cycling through coaches who combined to produce just two winning seasons.

USC athletic director Mike Bohn, who is a former college baseball player, told players and staff during Monday’s meeting that he and associate athletic director Lindsay Jaffe would lead a national search to find the next coach.

“We believe in the promise of USC baseball, and our expectation is to compete for national championships,” Bohn said in a statement. “We are determined to restore the unrivaled winning tradition of our program, and we will make the necessary commitments to ensure we successfully recruit an elite leader for our baseball program.”

When he was hired from Loyola Marymount in 2019, Gill spoke confidently about returning USC to its throne.

“I took the job knowing what the standard is. The standard is winning national championships at USC,” Gill told The Times in February 2020. “You come to USC to play baseball. That’s the standard. Now it’s about us upholding them, or just reminding ourselves of how to get to that point. I just think they need some direction on how to do that.”

Gill never found that footing at USC, finishing with a 60-59 record over three seasons. His troubled tenure was marred not only by two losing seasons, but also two university investigations, one into his conduct and another into possible NCAA rules violations. USC’s compliance investigation found only one secondary violation.

No mention was made of those investigations in USC’s statement on Monday. Bohn did, however, note that the disruption caused by the COVID-19 pandemic “created a difficult environment to navigate in the ensuing years.”

“We appreciate that Jason led us through those challenging circumstances,” Bohn said in his statement.

Gill won 10 of his first 15 games as coach in 2020 before the season was canceled amid the pandemic. Shortly after the team returned to play, seven players were suspended for violating pandemic protocols. A miserable season defined by turmoil followed from there, ending with a confrontation between the coach and one of USC’s captains, who was kicked off the team by Gill with two games left in the season.

Ten players and three other people close to the program later accused Gill and pitching coach Ted Silva of mistreating players and staff in a concerted effort to drive them from the program.

“No one wanted to be there,” one USC player recalled to The Times in March. “I was miserable. The culture of the team was terrible. There were a lot of kids that didn’t want to come back because of the coaches.”

That turmoil settled somewhat before this season, and USC officials were confident that Gill was steering the program in a new direction. The Trojans opened the season 11-3 but fell apart, finishing 14-25 during the remaining portion of the schedule.

Can Kim Jong-un speak English, why is he visiting Russia and how old is the North Korea leader?

Anti-vaxxers march through Paris in opposition to vaccine passports