Lawyers for a woman accusing former rugby league star Jarryd Hayne of raping her in California have requested police documents relating to separate charges in NSW in an attempt to examine possible patterns of behaviour, an unusual legal move that could advance the civil case if successful.

The young woman, identified only as JV, says she met Hayne at a bar in San Jose in 2015 when Hayne was playing for the San Francisco 49ers in the NFL. 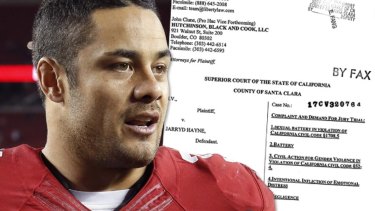 Jarryd Hayne is facing a civil lawsuit in the US.

Hayne has pleaded not guilty to NSW charges relating to an incident on the night of the 2017 NRL grand final, in which he allegedly bit a young woman on the genitals, causing serious bleeding, after catching a taxi to her home in the Hunter region.

JV's lawyers said they want to determine "whether the two alleged crimes, and earlier conduct in a bar, are similar enough in nature to aid the jury in determining such relevant matters, as modus operandi, absence of mistake or accident, intent, plan, or any other relevant issues before the jury".

They also want to see whether the defence or explanation given by Hayne to NSW Police is similar to the defence he has lodged in the US case. In that defence, he said the woman gave “implied consent” as she followed him out of the bar and ordered the Uber.

Hayne's legal team have refused to provide documents from NSW, questioning their relevance and arguing that the criminal matter is still pending.

A judge will make a determination on JV's request after a telephone hearing on Wednesday, local time.

Civil cases in the US have a low bar for the discovery of documents and other evidence from the opposing side, JV's lawyers have argued. Unlike Australia, similar prior acts can be admissible as evidence if relevant.

Earlier this month, a court appearance in San Jose was delayed, suggesting both parties were possibly moving towards a settlement. However, the latest filing suggests an agreement may be far off as JV's lawyer are still seeking evidence and have complained that Hayne's lawyers have stopped responding to their requests.

The matter is set down for a trial in January 2020.

Melbourne woman, 81, charged with murder over death of 50-year-old man