Dobbs, a opinion host and conservative ally of President Donald Trump who has consistently raged over the past month that the President was robbed of a second term by a rigged election, instead introduced a segment that calmly debunked several accusations of fraud that Rudolph Giuliani and other of the president's supporters have lobbed against one election technology company, Smartmatic. 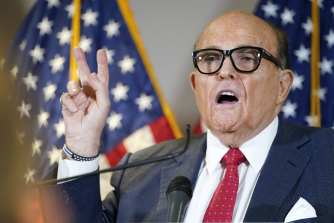 Fox News has begun to run segments that debunk election conspiracy theories put forward on the network by Trump lawyer Rudy Giuliani and others. Credit:AP

"There are lot of opinions about the integrity of the election, the irregularities of mail-in voting, of election voting machines, and voting software," Dobbs told his viewers, before introducing Edward Perez, an expert with the nonprofit Open Source Election Technology Institute, to give "his assessment of Smartmatic and recent claims about the company".

Perez then appeared in an apparently pre-taped segment, where he shot down various conspiratorial theories in response to questions from an off-camera, unidentified voice – not Dobbs's.

The segment, it turns out, was in response to a 20-page legal demand letter that was sent this month by Smartmatic to Fox News Media. Similar letters went to Fox's smaller competitors on the right, Newsmax and One America News Network. The letters demanded "a full and complete retraction of all false and defamatory statements and reports" aired by the network in its coverage of the November 3 presidential election. 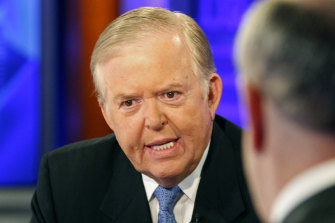 Specifically, the company charged that: "Fox News has engaged in a concerted disinformation campaign against Smartmatic. Fox News told its millions of viewers and readers that Smartmatic was founded by [the late former president of Venezuela] Hugo Chávez, that its software was designed to fix elections, and that Smartmatic conspired with others to defraud the American people and fix the 2020 US election by changing, inflating, and deleting votes."

Not only are these claims false, the company says, it only played a relatively minor role in this year's presidential election, as a contractor for the election process in Los Angeles County, California.

In the legal letter, Smartmatic included multiple segments from Dobbs's primetime show as examples of "false and defamatory statements/implications," with some comments coming from Dobbs himself – Dobbs said on November 18 that the company is comprised of "left-wing radicals" – and others from guests like Giuliani and one-time Trump campaign attorney Sidney Powell.

Fox News confirmed on Saturday that the fact-checking segment seen on Dobbs's show Friday night will also air on Justice with Judge Jeanine, hosted on Saturday night by Jeanine Pirro, and Sunday Morning Futures, hosted on Sunday morning by Maria Bartiromo, on which Powell made many of the comments included in the complaint. (Smartmatic had demanded that the corrections "must be published on multiple occasions" and must be made during primetime shows, so as to "match the attention and audience targeted with the original defamatory publications.")

OSET Institute did not respond to a request for comment but put out a statement praising Dobbs on Twitter and said it was "good on him" to "set the record straight." Perez, the organisation said, "was happy to help do so."

In the segment, Perez also clarified that Smartmatic is "for all intents and purposes," a completely separate company from Dominion Voting Systems, another voting technology company that has faced unsubstantiated charges of wrongdoing. In a November 12 appearance on Dobbs's show, Giuliani claimed that Dominion is owned by Smartmatic; on November 16, Dobbs said that "Dominion has connections" to Smartmatic, while also claiming the since-denied theory that Smartmatic "had ties to" Venezuela's Chavez.

During Friday night's fact-checking segment, the questioner asked Perez: "Have you seen any evidence of Smartmatic sending US votes to be tabulated in foreign countries?"

This appeared to be a reference to Giuliani's November 12 claim on the show that with Smartmatic software, "the votes actually go to Barcelona, Spain." Perez responded, "No, I'm not aware of any evidence that Smartmatic is sending US votes to be tabulated in foreign countries."

It is unclear if the fact-checking segment fulfilled Smartmatic's demand for a retraction. In the legal demand letter, Smartmatic said that the comments made on Fox will cost the company "hundreds of millions, if not billions, of dollars" in value.

Thus far, Fox appears to be the only network that has publicly made amends in response to Smartmatic's complaint. Newsmax, which only began referring to Biden as "President-elect" on Monday, released a statement responding to Smartmatic's demand letter by placing the burden of blame onto the guests who expressed those views on-air.

"Individuals, including plaintiff's attorneys, congressmen and others, have appeared on Newsmax raising questions about the company and its voting software, citing legal documents or previously published reports about Smartmatic," the company said. "As any major media outlet, we provide a forum for public concerns and discussion. In the past we have welcomed Smartmatic and its representatives to counter such claims they believe to be inaccurate and will continue to do so."

Coronavirus: 10 ways to help stay safe when you leave the house – The Sun

Greta Thunberg apologizes for ‘against the wall’ comment against politicians

Major US cities brace for ICE raids; Officials assure residents of their rights