A Russian missile strike at the airport in the southwestern port of Odesa – a city that has so far been relatively unscathed in the war – has damaged the runway and it can no longer be used, the Ukrainian military said on Saturday.

Russia has sporadically targetted Odesa, a Black Sea port, and a week ago, Ukraine said at least eight people were killed in a strike on the city.

“As a result of a missile attack in the Odesa region, the runway at Odesa airport was damaged. Its further use is impossible,” the Ukrainian military said.

There was no immediate word on the strike from the Russian military.

Russian forces also pounded Ukraine’s eastern Donbas region on Saturday. In the town of Dobropillia in Donetsk, the shockwave from a strike blew in the windows of an apartment building and left a large crater in the yard. 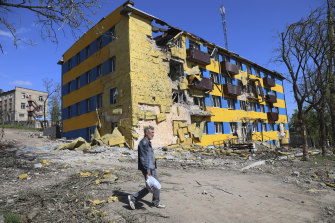 A local resident walks past a destroyed building in Mariupol.Credit:

One resident, who gave only his first name of Andriy, said his partner was in a room facing the yard at the time of the attack and was knocked unconscious.

“Thank God the four children were in the kitchen,” he said, standing in the destroyed living room.

Residents sifted through their belongings to see what could be salvaged.

“At around 9:20am this happiness flew to our house, said Oleh, who also gave only his first name, speaking with sarcasm. “Everything is destroyed.”

Also on Saturday, Ukrainian forces fought village by village to hold back a Russian advance through the country’s east, while the United Nations worked to broker a civilian evacuation from the last Ukrainian stronghold in the bombed-out ruins of the port city of Mariupol.

An estimated 100,000 civilians remain in the city, and up to 1,000 are living beneath a sprawling Soviet-era steel plant, according to Ukrainian officials. Ukraine has not said how many fighters are also in the plant, the only part of Mariupol not occupied by Russian forces, but the Russians put the number at about 2,000.

Russian state news outlets reported Saturday that 25 civilians had been evacuated from the Azovstal steelworks, though there was no confirmation from the UN or Ukrainian officials. Russia’s RIA Novosti news agency said 19 adults and six children were brought out of the plant, but gave no further details.

Moscow hopes to take full control of the eastern Donbas region made up of Luhansk and Donetsk, parts of which were already controlled by Russian-backed separatists before the invasion.

The General Staff of Ukraine’s Armed Forces said in a daily update that the Russians were trying to capture the areas of Lyman in Donetsk and Sievierodonetsk and Popasna in Luhansk, adding they are “Not succeeding – the fighting continues”.

The war since February 24 has turned cities to rubble, killed thousands and forced 5 million Ukrainians to flee abroad. Russia turned its focus to the south and east after failing to capture the capital, Kyiv.

Moscow calls its actions a “special operation” to disarm Ukraine and rid it of extreme anti-Russian nationalism fomented by the West. Ukraine and the West say Russia launched an unprovoked war of aggression.

While there have been efforts since the start of the war to hold peace talks, the two sides are far apart – which was illustrated by conflicting comments on the efforts by senior Russian and Ukrainian officials on Saturday. 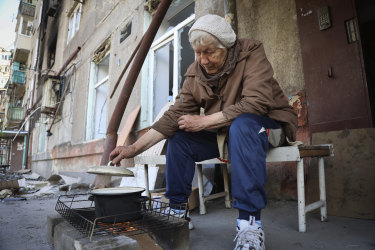 A woman cooks in the yard of her damaged apartment building in Mariupol.Credit:

Russian Foreign Minister Sergei Lavrov, in remarks published on the Russian foreign ministry’s website, said lifting Western sanctions on Russia was part of the talks, but senior Ukrainian negotiator Mykhailo Podolyak denied this was the case.

Ukrainian President Volodymyr Zelensky has insisted since the Russian invasion that sanctions needed to be strengthened and could not be part of negotiations. He said on Friday there was a high risk the talks would end because of what he called Russia’s “playbook on murdering people”.

Ukraine accuses Russian troops of atrocities in areas near Kyiv that they previously occupied. Moscow denies the claims.

Lavrov said that if the United States and other NATO countries were truly interested in resolving the Ukrainian crisis, they should stop sending weapons to Kyiv.

French President Emmanuel Macron told Zelenskiy during a call on Saturday that his country would step up military and humanitarian support for Ukraine.

Ukraine carried out a prisoner exchange with Russia on Saturday, with seven soldiers and seven civilians coming home, deputy prime minister Iryna Vereshchuk said in a online post. She did not say how many Russians had been transferred.