Ukraine claims baby boy, one, has died after being raped by Russian soldiers ‘who also attacked nine-year-old triplet girls in front of their mother’

Ukraine is accusing Russian soldiers of raping children during its occupation of towns and villages surrounding the eastern city of Kharkiv.

They include allegation of the rape and death of a one-year-old baby boy by Russian soldiers.

Other allegations in the report, listed by Ukrainian journalist Iryna Matviyishyn, include the rape of three nine-year-old triplets in front of their mother, the rape of a two-year-old girl who survived, and the rape of two ten-year-old boys, among other unspeakable crimes.

The report comes from Lyudmyla Denisova, the Ukrainian Parliament Commissioner for Human Rights. 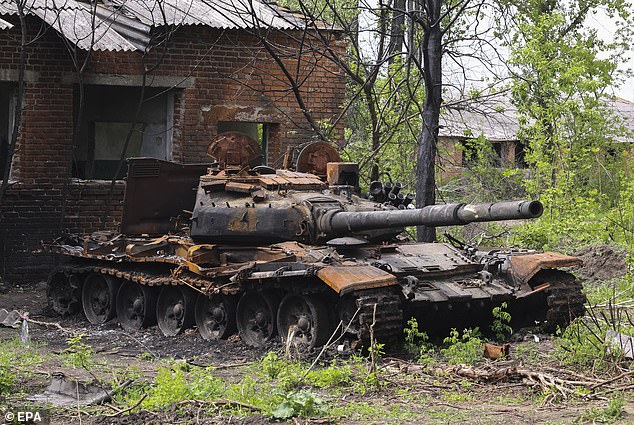 A burnt out tank seen in a village near Kharkiv after Russian forces retreated. A report from Lyudmyla Denisova, the Ukrainian Parliament Commissioner for Human Rights, alleged mass rapes committed by Russian forces during their occupation of the region

The Twitter page for the Ukrainian Ministry of Defence attributed to Denisova’s report: ’10 reports of rape by the occupiers, including 8 children, were received from newly liberated villages in the Kharkiv region in just one hour.

‘Yesterday – 56 reports. Among the children: two 10-year-old boys and a 1-year-old boy who died of his injuries.’

This is a very small part of territory that was liberated from Russians, compared to those towns, villages and cities that are still under the occupation,’ she said.

‘We can only imagine the number of such atrocities in Kherson, Melitopol, Mariupol, Berdyansk, and others.’

Russian forces still control vast swathes of Ukrainian territory and population. In every region that gets liberated, reports emerge of horrific war crimes.

The vast amount of the territories occupied by Russia have not been liberated.

The first Russian soldier to go on trial for war crimes in Ukraine pleaded guilty yesterday.

Vadim Shishimarin, 21, a former tank sergeant in the Russian army, pleaded for forgiveness with Kateryna Shelypova, whose husband Oleksandr he killed in the opening days of the war, as she confronted at a Kyiv court.

Shishimarin is facing life in jail after pleading guilty to charges of war crimes and murder for killing Oleksandr, who was shot in the village of Chupakhivka, Sumy region, on February 28 while pushing his bicycle along the road.

And earlier in the month, Ukraine’s prosecutor general, Iryna Venediktova, called Vladimir Putin ‘the main war criminal of the 21st century’ as she accused Russia of using rape as a tactic in its brutal invasion.

The UN Human Rights Council was due to hold a special session on Ukraine yesterday.

Builders dig up human remains in garden of home in Gloucestershire