Fed up Britain goes Christmas crackers! Shoppers to spend £965 each on presents and tree sales soar to 10 million as country gets into the festive swing after lockdown… with even Mariah racing up the chart

Christmas shoppers made up for lost time yesterday as they flocked to high streets in their droves for the first weekend since lockdown was lifted.

They spent an estimated £1.5 billion, bringing some relief to struggling retailers – but scenes of crowds packing the busiest areas sparked fears Covid infection rates could rise again, even before the five-day amnesty to allow three households to mix from December 23.

Regent Street in Central London, which had been pedestrianised to woo back shoppers, was a sea of people, few wearing masks.

Shoppers in Manchester were seen laden down with bags with long queues outside shops, including the soon-to-close Debenhams.

It’s a signal that defiant Britons are planning a turbo-charged Christmas after a year that almost everyone would prefer to forget. 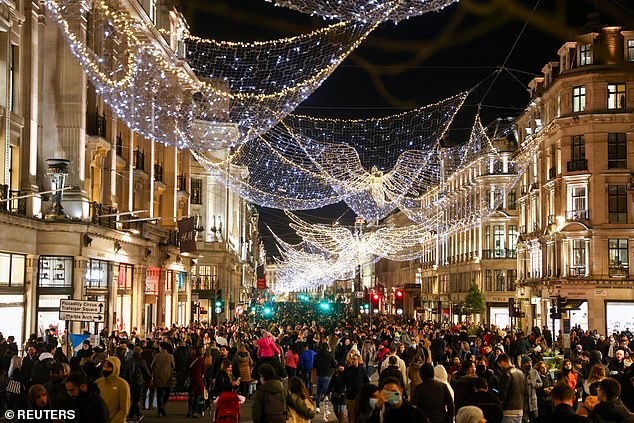 Elsewhere, sales of real pine trees have soared as people deck their halls early and festive tunes have begun to dominate the charts.

Behavioural psychologist Padraig Walsh said: ‘This has been a year like no other and it has affected our resilience and well-being. We take comfort in the relative certainty, predictability and ritual of Christmas. I think we are all looking forward to seeing the back of 2020, and maybe putting up our decorations early is our way of rushing this particular year out of the door.’

In Wimbledon, South London, one family has been festive since mid-October, when they put up their display of lights early ‘to cheer the local community’.

The British Christmas Tree Growers Association reported a 24 per cent increase in sales year-on-year, up to ten million Its manager, Heather Parry, said: ‘Last weekend was the busiest for sales of real Christmas trees there has ever been in November.’

Searches for decorations to adorn the trees on waitrose.com were up 65 per cent on this time last year, with sales of garlands up by 259 per cent and poinsettias up 672 per cent, compared to 2019.

The festive spirit has also infected the pop charts. Mariah Carey’s All I Want For Christmas Is You is already at No 2 in the charts, with Wham’s Last Christmas at No 3 and The Pogues’ Fairytale Of New York also in the top ten.

Last year, the average Briton spent £1,116 each on Christmas, but that is expected to rise after this difficult year. Research by money.co.uk found each of us plan to spend £965 this year on presents alone – up from £780 in 2019.

‘The bulk of sales will start before Christmas and many have already begun,’ he said. ‘Store closures have meant a significant build-up of stock, so it’s discounts all the way.’

But not all shoppers’ custom is going to big stores. A study by finance company Funding Circle showed half of are going out of their way to buy from smaller outlets.

Small business campaigner Michelle Ovens said: ‘We are optimistic that Saturday will be one of the biggest days for small businesses, helping boost those facing a compressed Christmas. The rising groundswell of affection we’re seeing for small firms from the public is also a positive indicator.’