Washington: When Joe Biden entered the White House in January, he made a vow to the world: Donald Trump’s inward-looking and often chaotic “America First” approach to foreign policy was over.

“We will repair our alliances and engage with the world once again,” Biden said in his first speech as President.

“We will be a strong and trusted partner for peace, progress, and security.“ 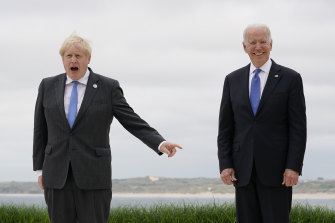 He would later sum up this message in just three words: “America is back”.

After four years of being blindsided and bullied by Trump, this was exactly what America’s traditional allies longed to hear.

The relief, verging on elation, at Biden’s election victory was on display when he met with fellow G7 leaders in the UK in June. British Prime Minister Boris Johnson, often caricatured as a transatlantic Trump, summed up the mood at the summit by describing Biden as a “breath of fresh air”.

That’s not something Johnson is saying any more. Instead, America’s allies feel dismayed and even betrayed by the US handling of the end of the war in Afghanistan. Rather than co-pilots in the withdrawal effort, Biden has treated them like powerless passengers who were merely along for the ride.

In the lead up to an emergency G7 meeting on Wednesday (AEST) Johnson and several of his senior ministers made clear they wanted Biden to delay his August 31 departure date so as many people as possible could escape Afghanistan.

French President Emmanuel Macron was also pushing for a delay beyond next Tuesday, as tens of thousands of Afghans with valid claims to have aided the allies have not yet made it into the airport.

But their pleas have gone unheeded as Biden pledges to stick to his self-imposed withdrawal deadline. His calculus is clear: he will not put American troops at a heightened risk of attack in order evacuate foreign nationals and Afghan allies from the country.

It’s an understandable position for an American president to take. But it jars with Biden’s high-minded rhetoric about rebuilding America’s alliances.

The withdrawal is happening on America’s timetable and is being driven by narrowly defined American interests. Biden has said as much himself.

“Our only vital national interest in Afghanistan remains today what it has always been: preventing a terrorist attack on American homeland,” he said following the Taliban takeover of Kabul.

The sense of empathy Biden has become known for has been almost entirely absent in his comments on Afghanistan. His persona on this issue has been that of a cold-blooded realist rather than a compassionate internationalist.

“Nobody asked us whether it was a good idea to leave that country in such a quick way,” Wadephul said last week.

Lord George Robertson, who was NATO secretary general at the beginning of the Afghanistan war, was even more scathing. He said he felt ashamed by Biden’s go-it-alone approach.

The feeling of solidarity between NATO allies that marked the start of the war “has been crushed by the unilateralism of the United States president”, Robertson told the Atlantic Council last week.

“I regret that because I’ve known Joe Biden for many, many years, and a man of wisdom and talent he is. But this act of recklessness has prejudiced and weakened NATO in ways from which we’re going to find it difficult to recover.”

Biden has delivered a harsh reality check to America’s allies. At least when it comes to Afghanistan, Trump’s “America First” philosophy lives on – just without the belligerent tweets.