Washington: Echoing his long-running "birther" campaign against former US president Barack Obama, President Donald Trump has indulged in a discredited conspiracy about Kamala Harris's eligibility to serve as vice-president.

Trump was responding to an article in Newsweek by conservative legal scholar John Eastman that said some people were questioning whether Harris might be "constitutionally ineligible" to be vice president because both her parents were immigrants. 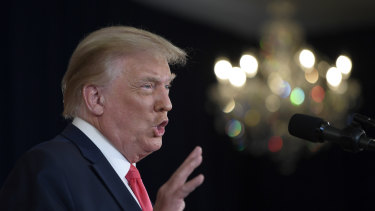 US President Donald Trump has a history of promoting conspiracies about his political opponents’ eligibility to serve as president.Credit:AP

Eastman's article suggested Harris may not be eligible to be second in line to the presidency under the US constitution's requirement that the president be a "natural born citizen" of the United States.

A senior legal adviser to the Trump campaign promoted the piece on Twitter.

The legal consensus is that being born on US soil grants full citizenship and the eligibility to serve as president.

Presumptive Democratic nominee Joe Biden named Harris – who was born in California to an Indian mother and Jamaican father – as his running mate this week. 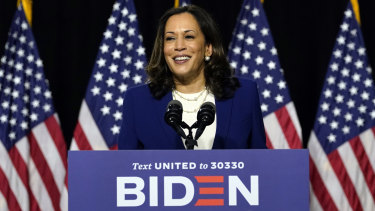 Asked about the argument on Thursday (Friday AEST) Trump said: "I just heard it today that she doesn't meet the requirements and by the way the lawyer that wrote that piece is a very highly qualified, very talented lawyer.

"I have no idea if that's right. I would have assumed the Democrats would have checked that out before she gets chosen to run for vice-president."

Trump used a longstanding campaign for Obama to produce his birth certificate – a demand predicated on the false idea he was born outside the US – to boost his credentials among Republican voters before launching his bid for president.

Two months before the 2016 election Trump said: "President Obama was born in the United States. Period." But he refused to apologise for his role promoting the conspiracy theory.

Democratic Senator Bernie Sanders said Trump was promoting "another racist lie" to deflect attention from his handling of the coronavirus.

Meghan McCain, the daughter of former Republican candidate John McCain, tweeted: "This is a gross, dark trend in American politics about birth qualification which is all clear and obvious. Stop."

John McCain faced questions about his eligibility to serve as president given he was born on a US naval base in Panama.

After receiving a torrent of criticism for publishing the piece, two senior Newsweek editors published a response saying Eastman's essay had "nothing to do with racist birtherism".

"The meaning of 'natural born Citizen', and the relation of that Article II textual requirement to the 14th Amendment's Citizenship Clause, are issues of legal interpretation about which scholars and commentators can, and will, robustly disagree," the editors, Nancy Cooper and Josh Hammer, wrote.