Home » World News » Traveller from Thailand is forced into £1,750 isolation

Passenger from ‘green list’ Thailand is forced to spend £1,750 on Quarantine Hotel after being ‘assured by Emirates’ it was fine to get connection in ‘red list’ Dubai – as other travellers blame room-booking system for missing flights

A traveller returning from Thailand has been forced to spend £1,750 on hotel quarantine after being given the wrong advice from his airline.

Simon Kenway, from Blackpool, flew into Heathrow on Sunday evening after spending two weeks, plus a quarantine period, in Thailand.

Thailand is not on the ‘red list’ of banned countries, so all returning passengers should quarantine at home.

However, when Mr Kenway arrived in the UK he was pulled from the ‘green list’ queue and told he had to pay for quarantine in a hotel, because he had taken a connecting flight in Dubai – contrary to what he said Emirates had told him. 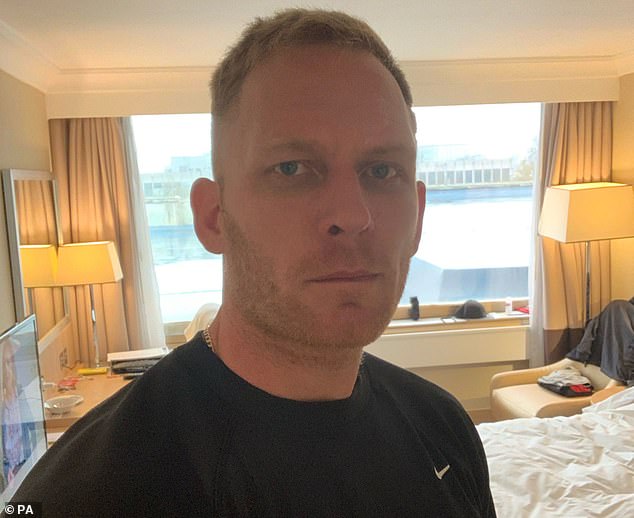 Simon Kenway, from Blackpool, flew into Heathrow on Sunday evening after spending two weeks, plus a quarantine period, in Thailand

Passengers who do not arrange a quarantine package prior to arrival in England face a penalty of up to £4,000, on top of the quarantine costs, meaning the airline’s advice could have left Mr Kenway with a bill of thousands of pounds.

Mr Kenway was first due to fly to Manchester but told he could not because the airport was not designated for quarantine.

When rebooking his flight using the Emirates customer service online chat, Mr Kenway asked the representative to confirm he could quarantine at home.

He said: ‘After (I) arrive (in) Glasgow I go straight home for quarantine, yes?’ – to which Emirates replied: ‘Yes’.

In a second chat, rebooking his flight, he asked again: ‘(I) arrive in London and go straight home for quarantine, same (as) before, correct?’ – to which the online representative replied: ‘Yes, same rules.’

He was not told on either occasion that transiting through Dubai would require him to pay for hotel quarantine.

The 34-year-old said: ‘If they clearly stated I would be refused entry after transiting through Dubai, I would have paid another airline to take me home on a different route.

‘It would have been a lot cheaper, less stressful and I would now be at home in quarantine.’ 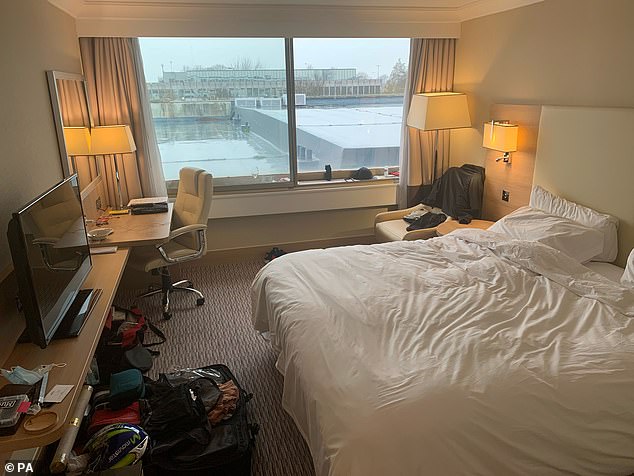 However, when Mr Kenway arrived in the UK he was pulled from the ‘green list’ queue and told he had to pay for quarantine in a hotel 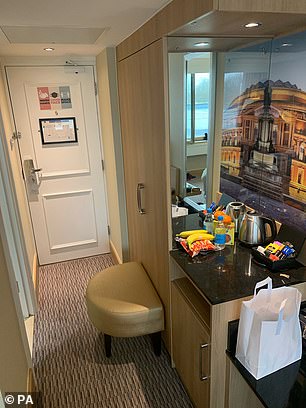 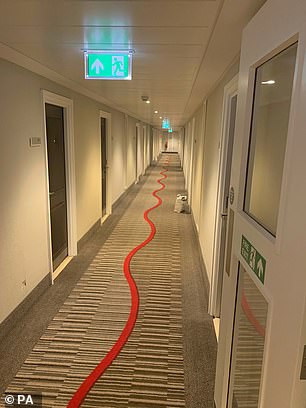 Passengers who do not arrange a quarantine package prior to arrival in England face a penalty of up to £4,000, on top of the quarantine costs. Pictured is Mr Kenway’s hotel

Passengers who pass through banned countries must quarantine unless they stay on a plane and no additional passengers are taken on.

When Mr Kenway left the UK, Thailand was on the air corridor list, with travel permitted, although he did have to pay for a 16-day quarantine in a Thai hotel upon arrival.

Details on the official Government website were ‘not clear’ about connecting flights, he said, which is why he checked directly with the airline.

On the first day of his quarantine, he was called by a Government official.

He said: ‘She said the Government website states ‘pass through a red zone’.

‘I told her this is not clear and it needs to say ‘transit’. She said she will report this and they will change the wording.’ 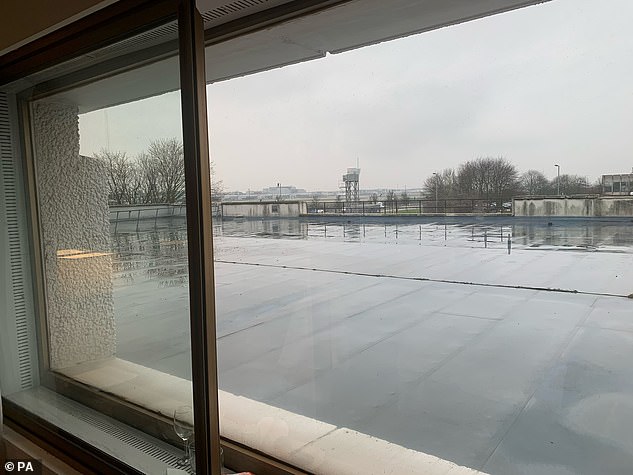 The bleak view from Mr Kenway’s quarantine hotel room at Heathrow airport, where he was made to stay unnecessarily 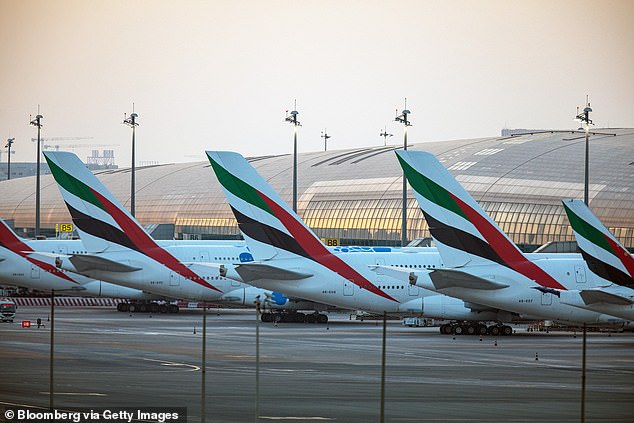 Emirates said: ‘We are currently conducting an internal investigation into his case’

Mr Kenway has been told he must complete the full quarantine period.

An Emirates spokesperson said: ‘We’re working closely with all relevant authorities to help get passengers home while ensuring they meet the entry requirements of their destination.

‘In the case of Mr Kenway, we are currently conducting an internal investigation into his case.’

Mr Kenway said he went into shock after arriving at his hotel room and has been told he cannot even leave the room for fresh air or to smoke. He has been forced to take 11 days off from his job working for a company that fixes hot tubs across the UK.

He added: ‘I feel like I should have at least spoken to a nurse or doctor before being put in the room, to be given a mental health assessment.’

Passengers on the hotel quarantine scheme said they have been forced to miss flights back to the UK due to delays in the Government’s booking scheme.

With the Government’s hotel quarantine scheme well under way, people travelling from banned ‘red list’ countries have found themselves unable to board flights due to missing paperwork.

UK and Irish nationals and UK residents returning to England from a country deemed at high risk for Covid-19 must now self-isolate in hotels. The rule applies to people returning to Scotland from any destination. No international flights are operating to Wales or Northern Ireland.

One passenger said the delays had led to them missing two flights back from Ethiopia. 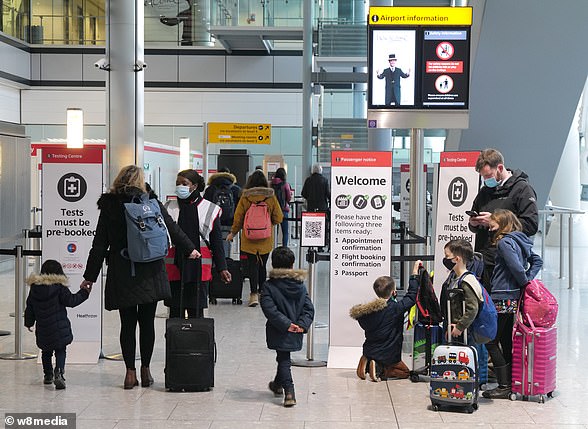 The hotel quarantine system is automated and run by travel management firm CTM.

While the majority of customers receive an invoice immediately after paying £1,750 for a quarantine stay, some said they are experiencing delays receiving that invoice.

Without an invoice number, travellers cannot complete their passenger locator forms, proving they have booked and paid for accommodation.

One passenger said she was refused entry on to a plane without the invoice number.

Passengers who do not arrange a quarantine package prior to arrival in England from red list countries face a penalty of up to £4,000, on top of the quarantine costs.

Those experiencing the delays are those who see their initial payment for the hotel declined, or those opting for a Government deferred repayment plan – this means those struggling financially are most affected.

A CTM spokesman said: ‘These bookings need to be approved by the Government before the invoice is issued and as a result, there may be a short delay whilst approval is obtained and an invoice is generated.’

Customers also reported difficulty getting hold of CTM to resolve issues and get an invoice number, with one person saying she was on hold to the company for almost two hours.

Passengers who quarantine at home are required to order Covid tests, to be taken on days two and eight. However, some have said they are experiencing delays receiving these on time.

N.J. Judge Who Told Alleged Rape Victim to 'Close Your Legs' Is Removed from Bench