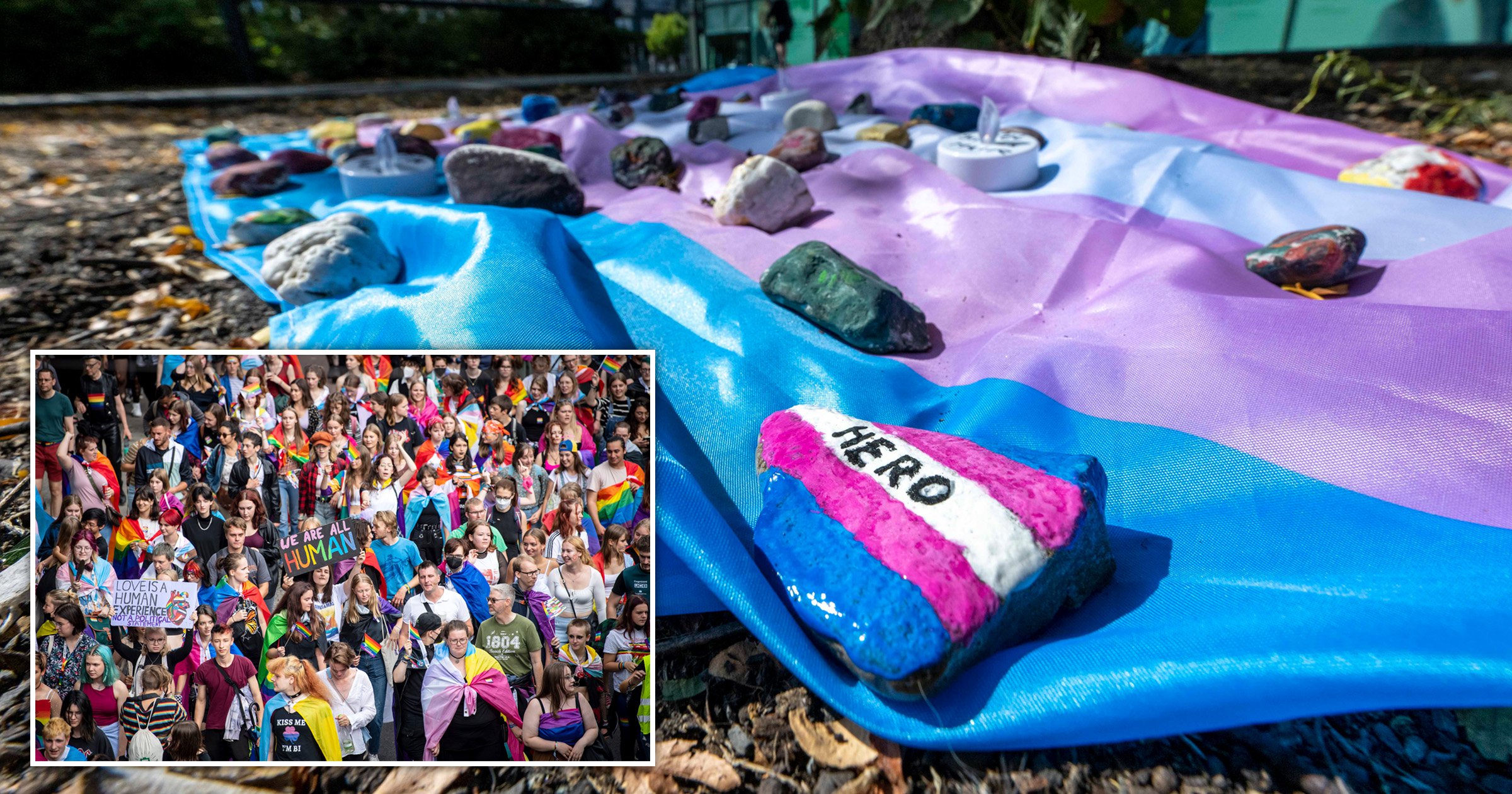 A trans man has died after being brutally beaten at a pride march in Germany.

The victim was assaulted after coming to the aid of other participants who were being verbally abused.

He was knocked to the ground when the suspect turned on him and suffered a devastating head injury.

A manhunt is under way to find the attacker and another man who fled the scene with him.

German authorities have only identified the 25-year-old victim by his first name, Malte.

It happened in the Western city of Münster on Saturday evening and he had been fighting for his life in hospital since.

According to Trans-Inter-Münster, a local LGBQT+ campaign group, he underwent several operations and was placed into a coma in the days before he died from his injuries.

The group described it as a ‘brutal hate-motivated attack’ and said they are ‘shocked, speechless and at the same time angry about this act’.

A statement from the group released over the weekend claimed the attacker hurled abuse at a lesbian couple and was acting in a ‘threatening manner’.

When Malte – who the group said was a trans man – intervened, he was slapped across the face and lost his balance.

A second blow knocked him to the floor and he smashed his head on the tarmac, the group claimed.

He was placed into a coma after doctors identified a brain hemorrhage.

Witnesses said the suspect was around 20-years-old and was accompanied by another person roughly the same age.

Authorities issued an appeal for witnesses and efforts to find both men are ongoing.

He wrote on Twitter: ‘Malte has died following a hate attack at the CSD Münster.

‘I’m stunned and sad. My condolences and deep sympathy go to his family and friends.’

A rally is due to be held close to where he was killed this evening to highlight ongoing violence against LGBTQ+ people.

The city’s lord mayor Markus Lewe ordered flags in the city to be flown at half mast to mark the killing.

He said in a statement: ‘The death of the young man shocks me deeply. We are infinitely sad. Our thoughts are with his family, his friends.’

Mr Lewe added: ‘This attack against a queer person is terrible. He concerns us all.

‘Our urban society is cosmopolitan and tolerant and will continue to fight to be a safe place for marginalised people.’

Nyke Slawik, who became one of the first transgender members of Germany’s parliament in 2021, paid tribute on Twitter and said she was ‘in deep sorrow’ over the news.

This year marks 50 years of Pride, so it seems only fitting that Metro.co.uk goes above and beyond in our ongoing LGBTQ+ support, through a wealth of content that not only celebrates all things Pride, but also share stories, take time to reflect and raises awareness for the community this Pride Month.

And we’ve got some great names on board to help us, too. From a list of famous guest editors taking over the site for a week that includes Rob Rinder, Nicola Adams, Peter Tatchell, Kimberly Hart-Simpson, John Whaite, Anna Richardson and Dr Ranj, as well as the likes of Sir Ian McKellen and Drag Race stars The Vivienne, Lawrence Chaney and Tia Kofi offering their insights.

During Pride Month, which runs from 1 – 30 June, Metro.co.uk will also be supporting Kyiv Pride, a Ukrainian charity forced to work harder than ever to protect the rights of the LGBTQ+ community during times of conflict, and youth homelessness charity AKT. To find out more about their work, and what you can do to support them, click here.

Donald Trump is not happy that Parasite won so many Oscars