Sajid Javid’s leadership ambitions have received a financial boost after he landed £50,000 from Tory backers who support both Leave and Remain.

The Home Secretary is believed to be preparing to run to replace Theresa May when she stands down.

And his nascent campaign has been helped by five £10,000 cash injections as he prepared to face-off against the likes of Boris Johnson and Dominic Raab, according to the Telegraph.

But the money, is due to be unveiled in the Register of Members’ Interest next week, means he is still behind them both, as they are believed to rakes in more than £100,000 each.

It comes amid widespread dissatisfaction at Theresa May’s leadership and demands that she reveal this week when she will be stepping down as Tory leader.

MPs want her to announce a timetable for departure when she meets the executive of the backbench 1922 Committee on Wednesday.

Jacob Rees-Mogg, leader of the European Research Group of Brexiteer Conservatives, said the May 23 contest looked set to be ‘difficult’ and pleaded with disillusioned Tories to stick with the party for the sake of Mrs May’s successor.

On LBC radio Mr Rees-Mogg, whose sister Annunziata is standing for Nigel Farage’s Brexit Party, said: ‘I would appeal to their loyalty, to their tradition, and to say that the Conservative Party will get a new leader at some point.’

He added: ‘We want that new leader to have a base on which he or she can build and if we find that we are getting under 15 per cent of the vote, if we are coming fifth behind the Greens, then it will be harder for that figure to rebuild.’ 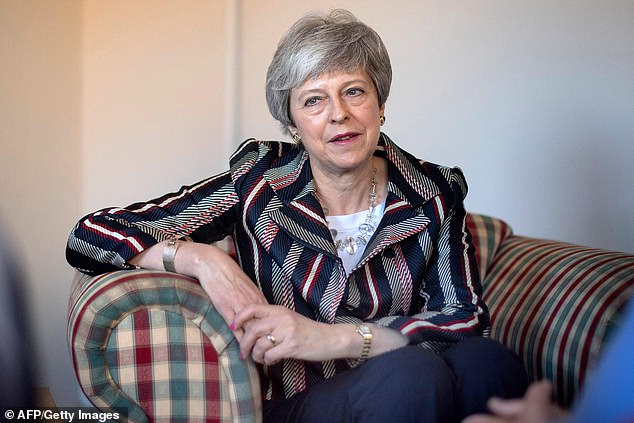 MPs want Mrs May (pictured today) to announce a timetable for departure when she meets the executive of the backbench 1922 Committee on Wednesday. 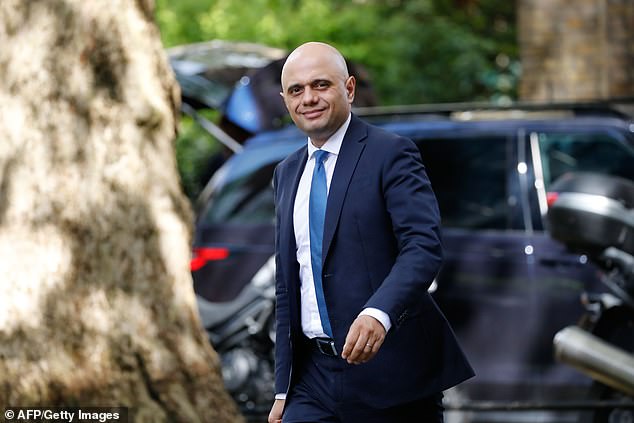 A source close to the Home Secretary told the Telegraph: ‘The breadth of support for Sajid in the business community shows that job creators have confidence in his leadership credentials and underlines his ability to unite the Party.

Philip May ‘could tell Theresa to step down within a month’, ministers claim

Theresa May could be told to call it a day within a month by her husband, senior ministers believe.

With a Tory wipeout at the European election on May 23 widely anticipated, they believe Philip May, who is constantly at the Prime Minister’s side, will try to talk her into resigning to avoid a crushing defeat when party grassroots activists hold a confidence vote on her leadership in June 15.

‘If she can’t find a majority for Brexit in the next couple of weeks, does she really risk abject humiliation at the national convention on June 15?’ one told the Sun.

‘Or does Philip sit down with a whisky and tell her it’s time.

‘I suspect he’ll tell her not to put herself through that, and knowing her, she won’t want to put the party through that either.’

‘Business leaders want someone who can end the Brexit uncertainty, lead the country positively and see off Corbyn at the next election. Sajid passes these tests with flying colours.’

Senior ministers and backbenchers have begun to make overt and covert pitches to replace Theresa May.

Although there is no leadership contest under way, a lack of confidence in Theresa May among Conservative MPs has prompted International Development Secretary Rory Stewart, Commons’ Leader Andrea Leadsom and former Work and Pensions Secretary Ms McVey to declare their candidacies.

A series of high-profile media appearances from Jeremy Hunt, Michael Gove and Dominic Raab in the last week have also buoyed speculation that they will run.

Under current Conservative Party rules, the Prime Minister is free from an internal challenge to her leadership until December 2019, but could step down before then.

Jacob Rees-Mogg, leader of the Brexiteer European Research Group of Tories, appealed for disillusioned Conservatives to stick with the party for the sake of Theresa May’s replacement.

He said: ‘I would appeal to their loyalty, to their tradition and to say that the Conservative Party will get a new leader at some point’.

He told LBC Radio: ‘We want that new leader to have a base on which he or she can build and if we find that we are getting under 15 per cent of the vote, if we are coming fifth behind the Greens, then it will be harder for that figure to rebuild.’

The Tories face the ignominy of finishing fifth in the EU elections as Nigel Farage continues to give them a battering, a new poll revealed today.

The Brexit Party is racing ahead with a predicted 34 per cent of the vote on May 23 – but Theresa May’s Conservatives are heading for just 10 per cent, a YouGov survey has found.

This would put the Prime Minister’s party in fifth place behind the Greens and the Liberal Democrats, who were on 15 per cent and 11 per cent respectively.

The collapse in support for the Conservative Party is piling pressure on Mrs May to set a date for her departure from No 10 – but Labour is also down five points on 16 per cent, with confusion over their Brexit position continuing.