Aoife, Saoirse, omicron and Kyiv: Top ten words with the most difficult pronunciations are revealed – as Irish names, foreign foods and Americanisations leave us baffled

Irish names, foreign food and Americanisations rank among the words with the most difficult pronunciations, according to a study.

Based on Google search results, the research found that the hardest name of all is Aoife, pronounced ‘ee-fa’, which generated 111,000 searches over the course of last year, The Times reports.

Saoirse, pronounced ‘sur-sha’, ranked as the second, while the third was omicron, which has at least two common pronounciations in use – ‘om-my-kron’ and ‘om-uh-kron’. 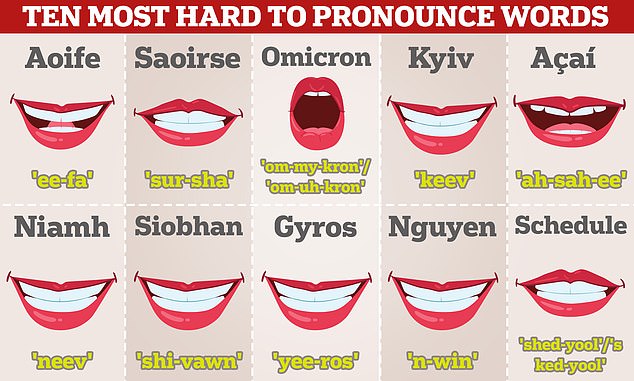 Next comes Kyiv, the Ukrainian capital, which is pronounced ‘keev’ in Ukrainian.

English speaking countries have traditionally referred to the city as ‘key-ev’, like chicken ‘kiev’ but a campaign since 2018 prefers the sounding to be ‘kee-yiv’ or ‘keev’.

We also get confused by Americanisations like the word schedule, which comes in tenth place in the study.

The confusion might be because there are two common pronunciations — ‘shed-yool’ and ‘sked-yool’, the former being the traditional English version and the latter being American.

Lee Beardsley, of Slotbox, told The Times: ‘This research might highlight how many of us have been wrongly pronouncing everyday words without realising — and even worse, it highlights our mispronunciations of names.

‘The influence of current events can also be seen, with many Brits wanting to find the correct pronunciation of Kyiv and omicron to involve them in topical conversation.’