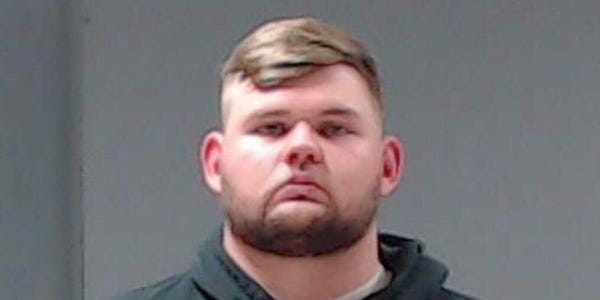 The Texas police officer who shot 31-year-old Black man Jonathan Price has been charged with his murder, the Texas Department of Public Safety (TDPS) announced.

In a statement, the TDPS said that preliminary investigations show that Officer Shaun Lucas' actions in shooting Price on Saturday night were not "objectionably reasonable."

"Objectionably" appears to be a mistake for "objectively." Insider has reached out to the TDPS for clarification, but did not immediately receive a reply.

Jail records show that his bail was set at $1 million, according to local station WFAA.

Lucas shot Price on Saturday evening after Price intervened in an altercation between at the Kwik Check gas station in Wolfe City, WFAA reported.

In its statement, the TDPS said that Lucas responded to calls of a disturbance, where he saw Price.

Price's relatives told WFAA that he had been trying to defuse a domestic violence situation and that the argument had been settled before police showed up.

According to the TDPS, Lucas tried to detain Price, "who resisted in a non-threatening posture and began walking away." Lucas used his Taser, and then shot Price, the TDPS said.

Price was taken to Hunt Regional Hospital, where he died, according to the statement.

Civil rights lawyer Lee Merritt, who is representing Price's family, wrote in a Facebook post that he had been told Price had "raised his hands and attempted to explain what was going on," when police arrived.

"Police fired Tasers at him and when his body convulsed from the electrical current, they 'perceived a threat' and shot him to death," Merritt wrote.

Hundreds of people met at the scene of the shooting on Monday evening for a vigil, marching towards the main street and chanting Price's name, according to WFAA.

Numerous tributes to Price have appeared on social media. Merritt wrote: "In Wolfe City, TX he was known as a hometown hero. Motivational speaker, trainer, professional athlete and community advocate— he was dearly loved by so many."

Former baseball player Will Middlebrooks, who says Price was a childhood friend, posted to Twitter saying Price was his "first ever favorite teammate" and a "good man."

Middlebrooks has organized a fundraiser for Price's family, which at time of writing had passed $65,000 in donations.

A police investigation is being led by the Texas Rangers, with the cooperation of the Wolfe City Police Department and the Hunt County District Attorney's Office, the TDPS statement said.

Insider has contacted TDPS for further comment, but did not immediately receive a reply.

The Trump convention starts tonight as he travels to North Carolina

Cop charged with murder in fatal shooting of Jonathan Price