The criminal justice system is like a giant merry-go-round. Crooks commit crime, cops arrest crooks, courts jail crooks, the parole board releases them, and we start all over again.

These are not crimes to get rich. They are more about fitting in and appearing tough than stealing your way from Struggle Street to Fat City.

Which is why some of the crimes are all about being one of the cool kids, stealing the latest mobile phones, headphones and ghetto-approved shoes. “They just want the latest,” says Acting Inspector Bill Mobilo.

While the crimes may be dumb, it doesn’t make them any less tragic with street gang wars occasionally culminating in fatal stabbings. If the gangs get big enough, train stations, parks and even shopping malls can become no-go zones. 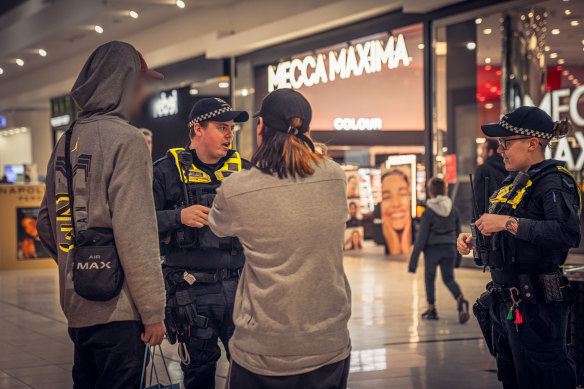 Police blitz a shopping centre as part of Operation Alliance.

You join a street gang to gain notoriety and a reputation. The trouble is, with a profile comes police interest.

“We have the most success by getting in early and breaking the cycle.”

There are about 600 known street gang members in Victoria with about 200 hard-core offenders. The best tactic is to crack down on the 200 while trying to help the rest navigate their way out of trouble. 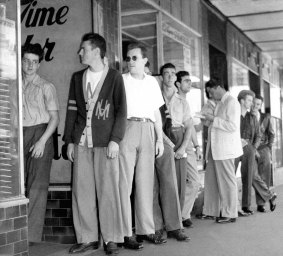 Bodgies lining up for haircuts. Hardly the most threatening sight.Credit:Harry Freeman

There have always been gangs. When I was growing up in Preston, Crevelli Street was a no-go zone and playing football in the Olympic Village (players in the local side all those years ago thought a hard tag was a visit from the parole officer) required an assumed name and fleeing immediately on the final siren. (My gang was the First Preston Boy Scouts, which meant I could tie a mean half hitch that wasn’t much good in a street fight. The closest we came to violence was an enthusiastic game of British Bulldog.)

Before that, there were the Bodgies and the police response was the Bodgie Squad, a group of police that bashed the Bodgies at the first sign of trouble.

In recent times, there have been several strategies that have included refusing to acknowledge gangs existed, trying to deal with individual crimes, and occasional blitzes as a show of strength. This has helped to manufacture headlines and little else.

Catching them was pretty easy. Few of the gangs tried to disguise their involvement – some committed violent offences still in school uniform.

Eventually, it became clear that just locking up the offenders did little to change the rate of crime.

Just like police in gang-dominated cities such as Chicago, Boston, Los Angeles and Glasgow, there was a need to develop violence-reduction strategies, working with local councils, youth workers and welfare agencies.

Today, there is a city-wide strategy called Operation Alliance that tries to slow the merry-go-round to give offenders a better chance to get off.

So instead of waiting for the next stabbing or home invasion police identify their major gang offenders and put them under strict supervision. 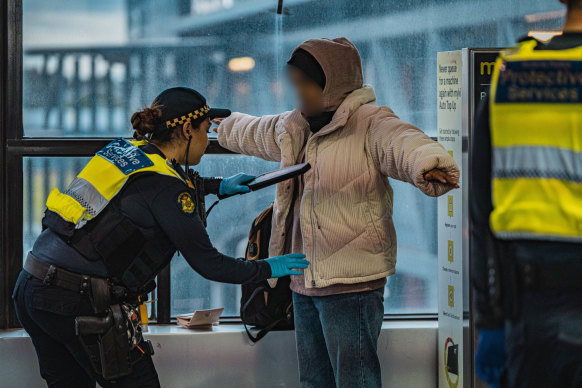 Enforcement is only part of the answer.

This is not kick-up-the-backside policing. In Wyndham, the Embedded Youth Outreach Project pairs police and youth workers to respond to incidents and intervene and assist young people in tackling whatever issues they face.

In Brimbank, police engage with the younger siblings of gang members trying to move them away from the criminal groups before they are sucked in. “We need to get in early,” says Dennison. “We sometimes see someone with no criminal records committing armed robberies. They are siblings who go from zero to 100.”

As part of the intervention, police work with families of gang members. “There are parents who work night shifts and can be working two separate jobs who are doing the best they can. They are often at their wits end,” Dennison says.

Sometimes, police are able to act as a result of a tragedy such as earlier this year when a young man was killed in a gang knife attack.

There were teenagers there that night and some saw the homicide and realised this was all too real. Police then moved in using the death as an example of what would happen to them, either as victims or offenders. “Some on the periphery were quite shaken. It was a real wake-up call.”

So what is a street gang? According to police it is a group of between three and 50 who come together to commit crimes. They recruit from schools, streets, families and on ethnic grounds.

Crimes include armed robberies, home invasions, thefts, stealing cars and then burning them out and attacking each other. “Gang on gang violence is the most prevalent,” says Mobilo.

While they are local gangs, their crimes move out of the district with one group stealing cars in one suburb and torching them in another. Others travel across town to commit home invasions.

Violence in the city can be generated by suburban gangs that have hired AirBnBs for parties. And once they get on a roll, they don’t stop until they are arrested.

Typically, members are aged 14 to 22 and contrary to popular belief, most don’t go on to be career criminals. “They tend to grow out of it,” says Mobilo.

What police are trying to do is make them grow out of it quicker by offering alternative paths through job opportunities and education or by constant monitoring, so they are picked up as soon as they offend.

Police won’t refer publicly to gang names, believing they revel in notoriety. Knowing the gang members is one thing. Stopping them committing crimes is another.

Such as when police received a call from shopping centre security about some of their known offenders stealing knives and hiding them in planter boxes.

A check of CCTV followed by a physical search found knives and machetes hidden throughout the centre in planter boxes and toilets to be grabbed by gangs in case of a fight. Brimbank police shared the intelligence, leading to searches of shopping centres in other districts.“The same thing was happening around Melbourne,” Mobilo says.

When a gang member was threatened, police intercepted a car carrying several rivals armed with knives and machetes. The Offender Management Team with Youth Justice took the threats so seriously they relocated the family and persuaded the rivals that a truce would be in everyone’s interests.

In August, a new gang that had just been formed in the Melton area started to flex its collective muscle to commit crime and start a turf war.

The police tactic was old-school with local cops, backed by the Viper Taskforce, Offender Management Teams and the Gang Crime Squad making a series of arrests until the threat dissipated.

Alliance runs blitzes every three months, bringing in anti-gang squads such as Viper to check railway stations and spaces where gangs congregate, looking for weapons, stolen property and finding anyone breaking bail curfews.

Just a couple of weeks ago, police ran a four-day blitz in Croydon, Endeavour Hills, Fawkner, Melton, Mill Park, Point Cook, Ringwood, Springvale and Werribee that resulted in the arrest of 66 people with gang links. They were charged with offences that included aggravated burglary, robbery, car theft, assault and criminal damage.

But is this approach to dealing with gangs working?

Five years ago in the Melton area, there were between eight and 10 home invasions a month with up to 10 offenders bursting into homes. Some victims felt so threatened, they sold up and moved.

In the 12 months ending in August, police arrested 452 street gang members (73 per cent of known members) 1334 times and charged them with 3201 offences. Their average age was 18.

Police are monitoring 619 gang members, a reduction of 128 since Alliance started in September 2020. Over the past year, 221 people have dropped out of gangs and stopped offending while 204 have joined.

There are 45 members in adult or juvenile custody. More than 25 per cent of known gang members were not found to have committed offences in the past year.

In the Maribyrnong area, there were 600 incidents in 2020; the figure should be about 200 this year.

Says Mobilo: “We have the most success when we move in quickly before a small issue becomes a major problem.”
The best of Good Weekend delivered to your inbox every Saturday morning. Sign up here.

Series of unfortunate events before Mr Universe jumped through window