Home » World News » The pipes, the pipes are calling … for aspiring women plumbers

Six years ago, Kimberley Smyth was at a parents’ meeting at her teenage daughter’s school when a career adviser told the audience that, unlike boys, “girls can’t fall back on a trade”.

“I was in my plumbing uniform, sitting next to my daughter. I gasped and she elbowed me and said, ‘Mum, don’t say anything’,” said Ms Smyth, who runs her own plumbing business, Hey Sista Plumbing. 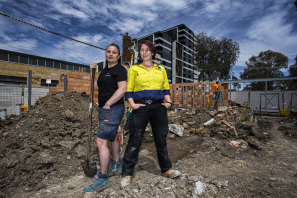 “But in my head I’m going, ‘how is there any hope if a careers adviser isn’t letting parents know their daughters have that opportunity’?”

But while the career pipes are clearing for women in other industries, there is a serious blockage in plumbing.

On Monday, Master Plumbers and the Victorian government’s Apprenticeships Victoria will launch a $1.2 million Women in Plumbing campaign to attract more women to the trade.

The two-year pilot program will offer 20 new apprenticeships and 20 paid pre-apprenticeships to women. There is a new Women in Plumbing website and Facebook page, offering mentoring, networking and social events. Information on careers will be provided to schools.

Mr Daly hopes the campaign will be ongoing and “change women’s attitudes towards the plumbing profession”.

Ms Smyth, 40, said she was laughed at in her early 20s when she told family and friends she wanted to be a plumber, and so went into nursing and machine operating.

Ten years ago, she was knocked back for plumbing apprenticeships by employers, who said it would be impossible for the mother of four. So, she became apprenticed to her husband, Mark, and now runs her own business, with three out of five of her employees women.

She says there’s been more positive than negative interactions with workmates, but sexual harassment is still around: she’s been left abusive voicemails and once, working up a ladder on a building site, a labourer stared at Ms Smyth’s backside until her husband told him to stop.

Third-year apprentice Michaela Healey, 28, said she hadn’t encountered sexism from a plumber, but another worker, an older man, once told her she “didn’t belong on a building site”.

Ms Healey said that on leaving school, she was encouraged to be a carer and then a nurse, which didn’t suit her. She loved the problem-solving and constant learning of plumbing.

The Women in Plumbing campaign was “amazing”, she said, adding she was confident the number of women in the industry would rise.

She said the qualities needed included using initiative, not being afraid to ask questions and being willing to have a go.