Home » World News » The families who dig up their dead relatives

Six feet under-dressed: The families who dig up their dead relatives to put fresh clothes on them, have a hug… and even share a cigarette

Families gathered to raise their dead loved ones from their tombs, clean and redress the corpses in this year’s Ma’nene ritual to honour the spirits of their mummified ancestors in Indonesia.

Every August the Torja community in Panggala, Nort Toraja, South Sulawesi, re-dress their relatives’ bodies, clean them, speak with them and even light them cigarettes.

The Toraja Death Rituals are considered the biggest celebration of life by people who believe the link between life and death is infinite. 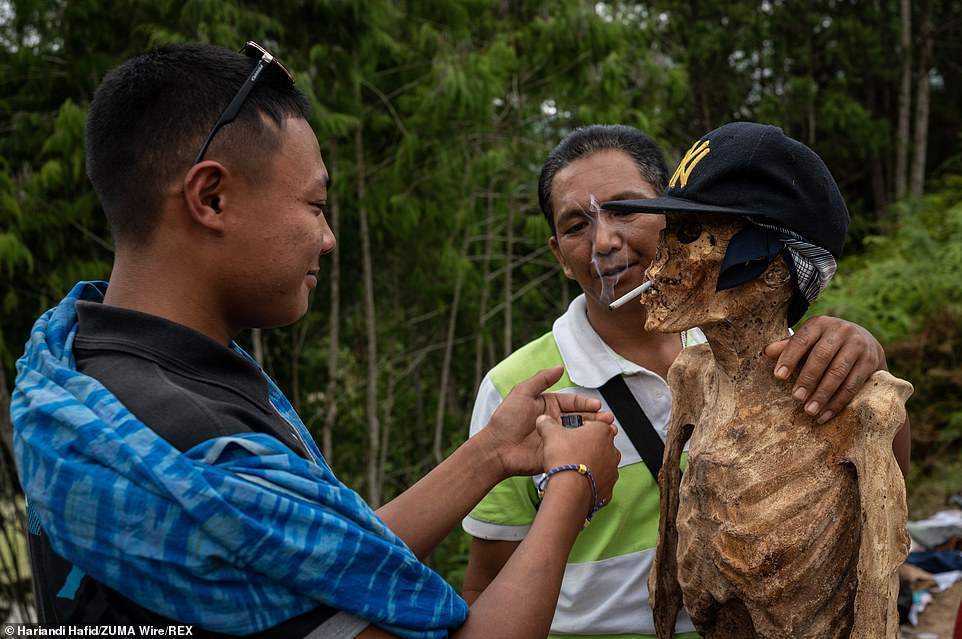 This year’s Indonesian Toraja Death Ritual, to honour the spirits of their mummified ancestors in Indonesia, saw family members lighting a cigarette for their relative and interacting with him as if he was alive as is part of the ritual 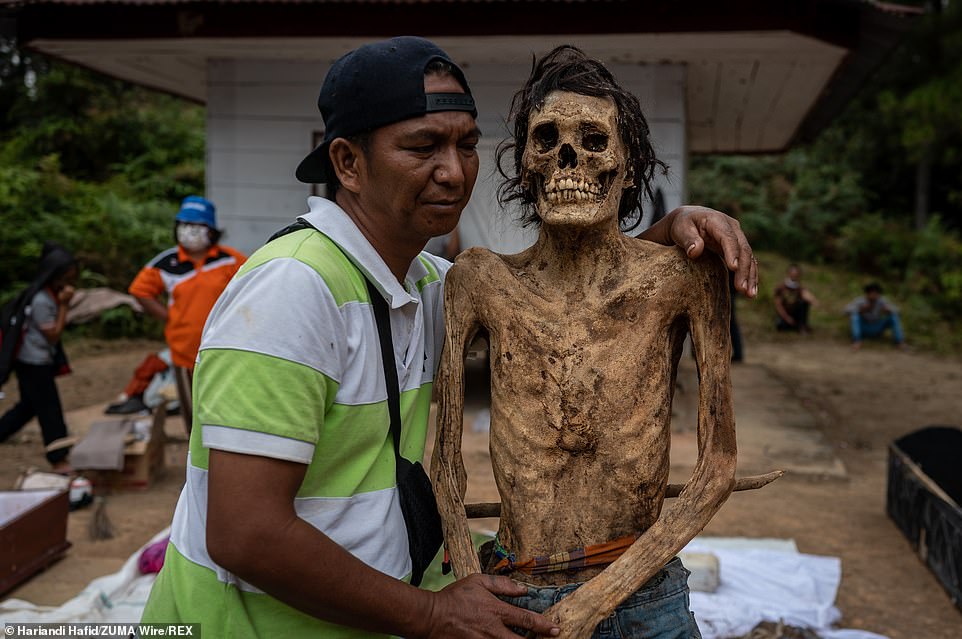 Every year family members raise the bodies of their loved ones clean their graves, redress them and interact with him as Roni Pasang is pictured doing here while he hugs his cousin 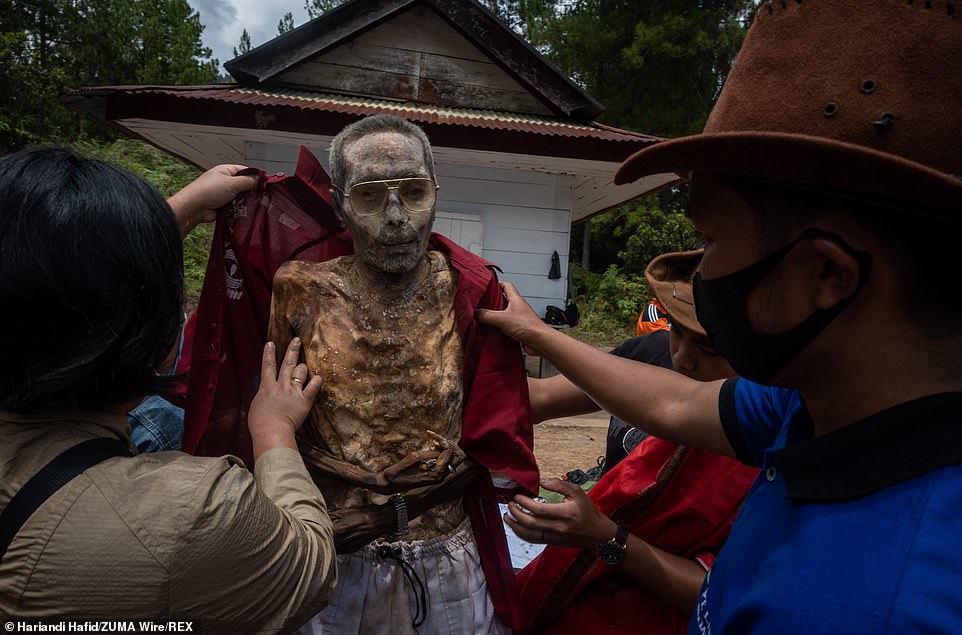 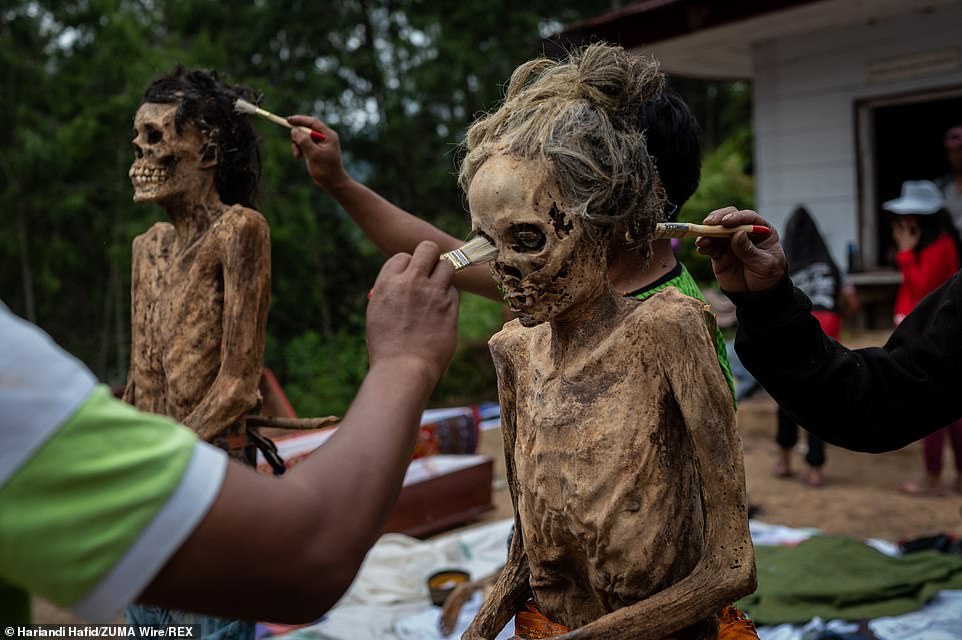 Families often mummify those who die and keep them in the house for months, sometimes even years while they prepare for the burial and mourn 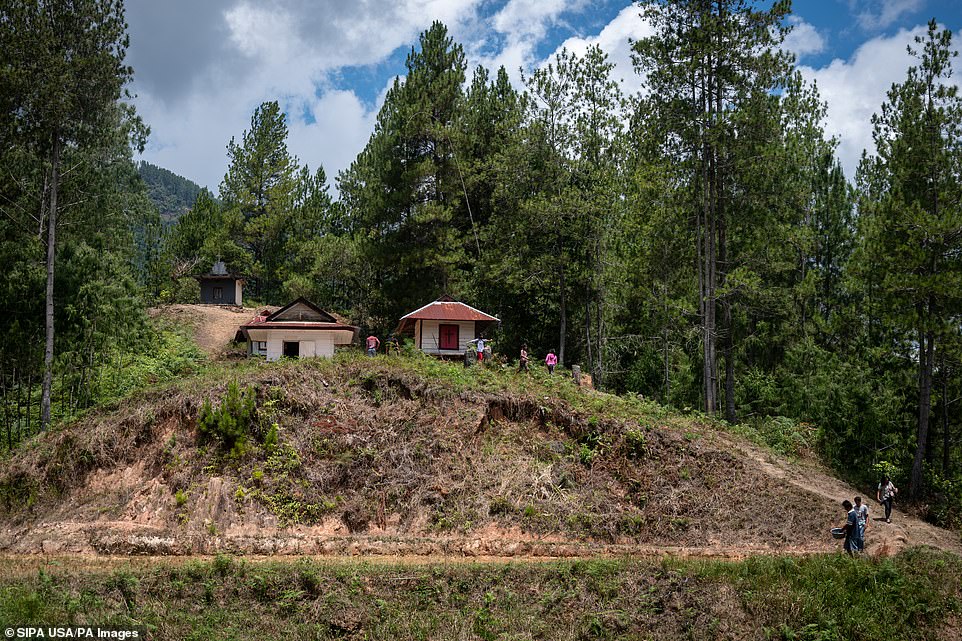 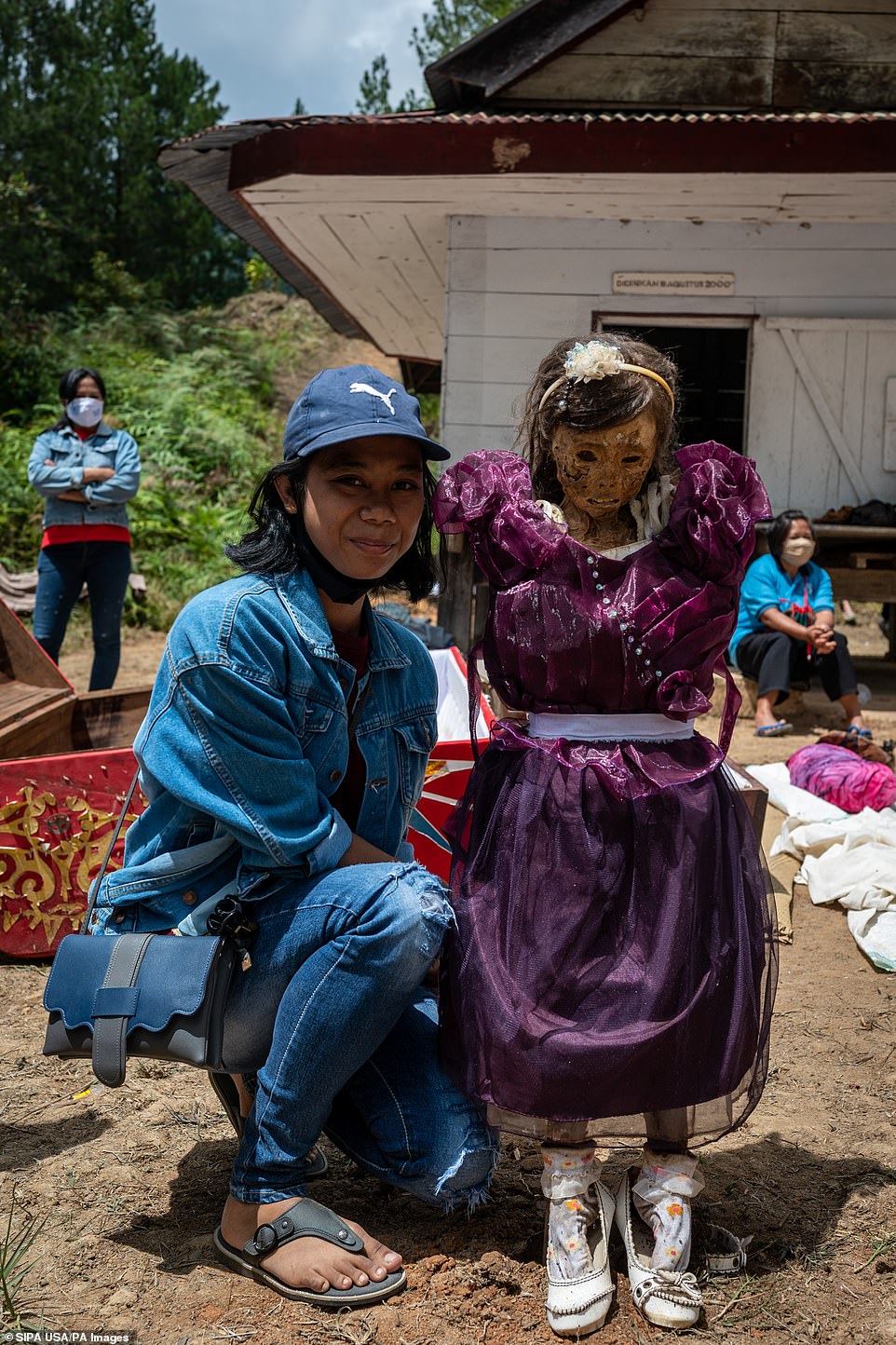 A family member is pictured posing for a photograph with the body of a little girl that has been newly dressed in a dress, shoes, a wig and even a detailed hair band 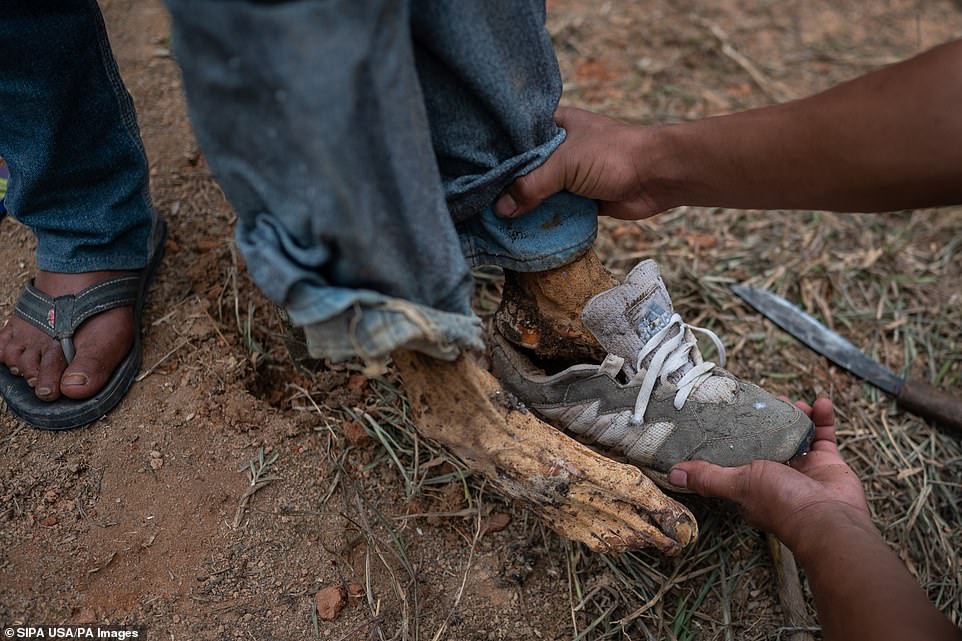 The tradition is entrenched in Toraja culture who are actually a largely Protestant Christian community in a Muslim-majority country.

When loved ones die families keep their bodies for months, sometimes years, in their own homes or in  a ‘Tongkonan’ which is a specific building designed to house the dead.

While families mourn, prepare for burials and save for the funeral they often interact with the bodies if they were alive by talking to them and including them in family meals.

The Torjan community consider death to be the most important aspect of life and often get into crippling debt from paying for funerals.

The annual visit to their loved ones is considered a second funeral where they also clean or replace coffins to prevent the bodies from decomposing.

After relatives have spent time with the dead and redressed their bodies and coffins they are usually reinterred with gifts in their ornate, colourful coffins. 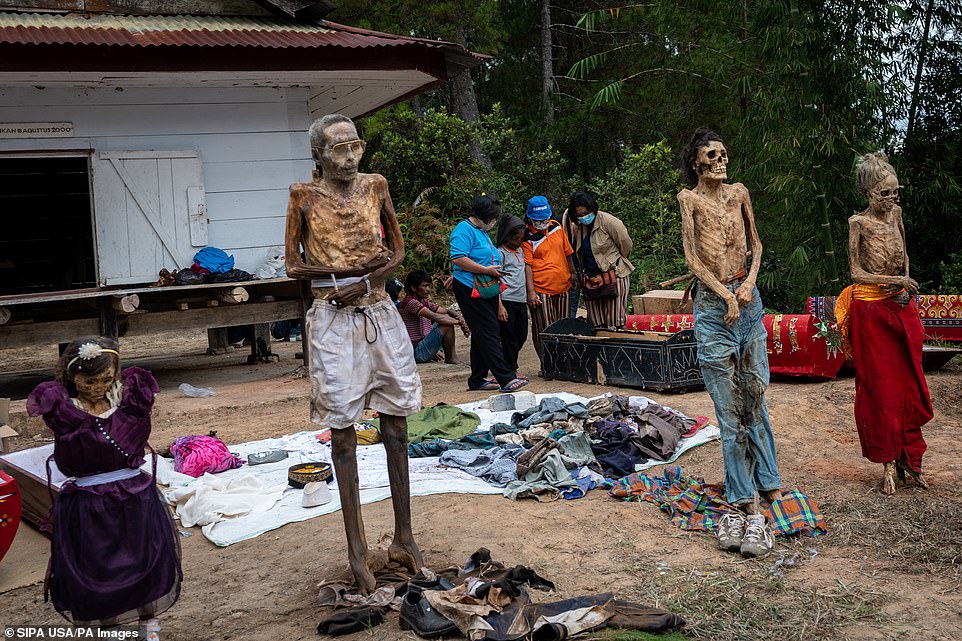 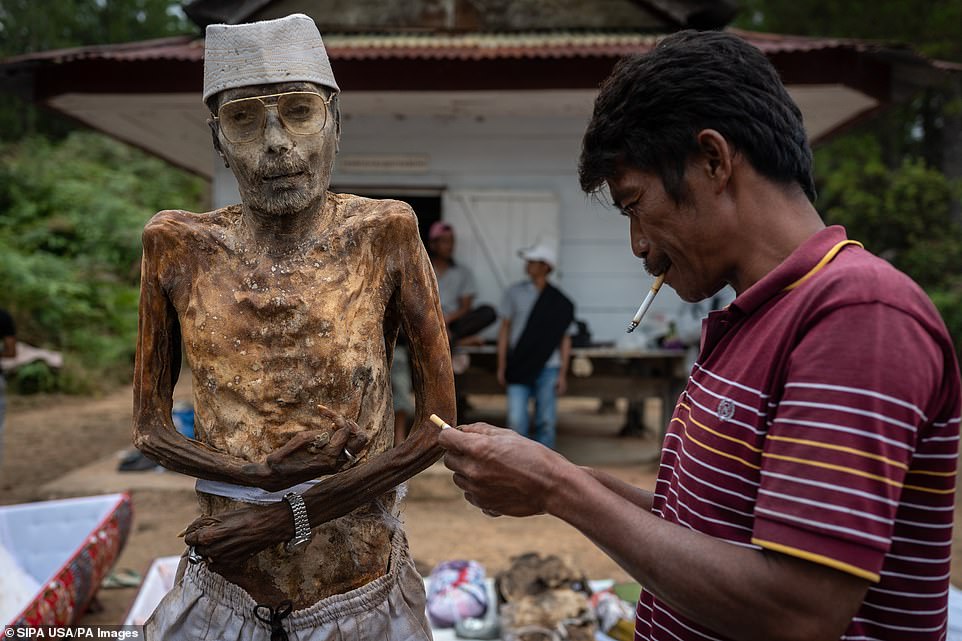 This body has been mummified, preserving his facial hair and is being offered a cigarette by a family member who has helped re-dress him and gift him a watch and a ring

Head of the Torajan branch of AMAN Eric Crystal Rante Allo last year told The Sydney Morning Herald while it might seem strange to outsiders, it is a key part of the culture.

‘Toraja people believe the spirit of the dead lives among us, the living, looking out for us, blessing us,’ he said.

‘That’s why, before the ritual of the burial is performed, they are called to’makula, or just sick, not yet dead. Toraja’s people highly respect their dead.’

Visitors are welcome to visit the area during the ritual month of August and are encouraged to take part in the festivities. 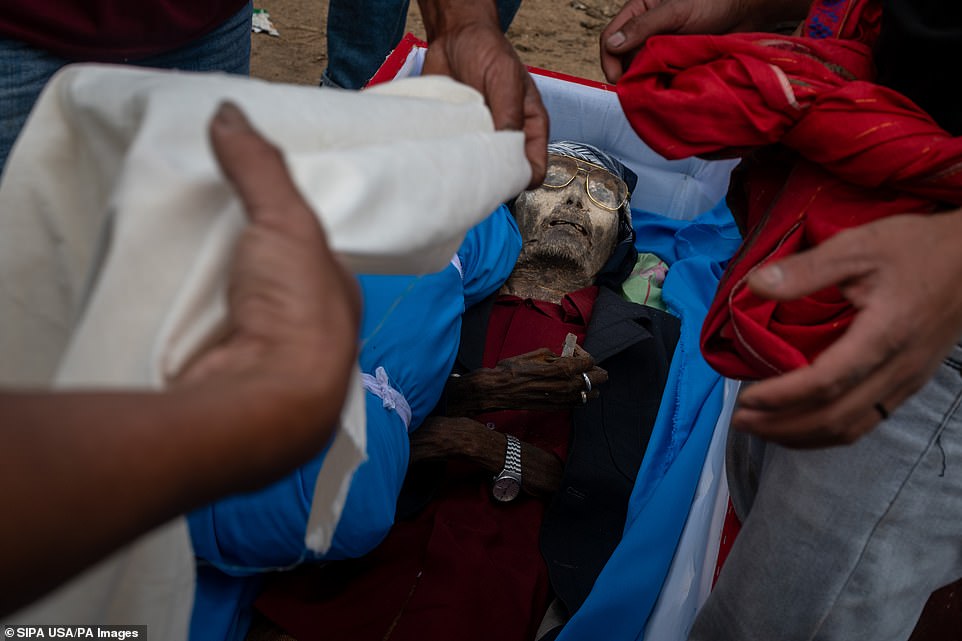 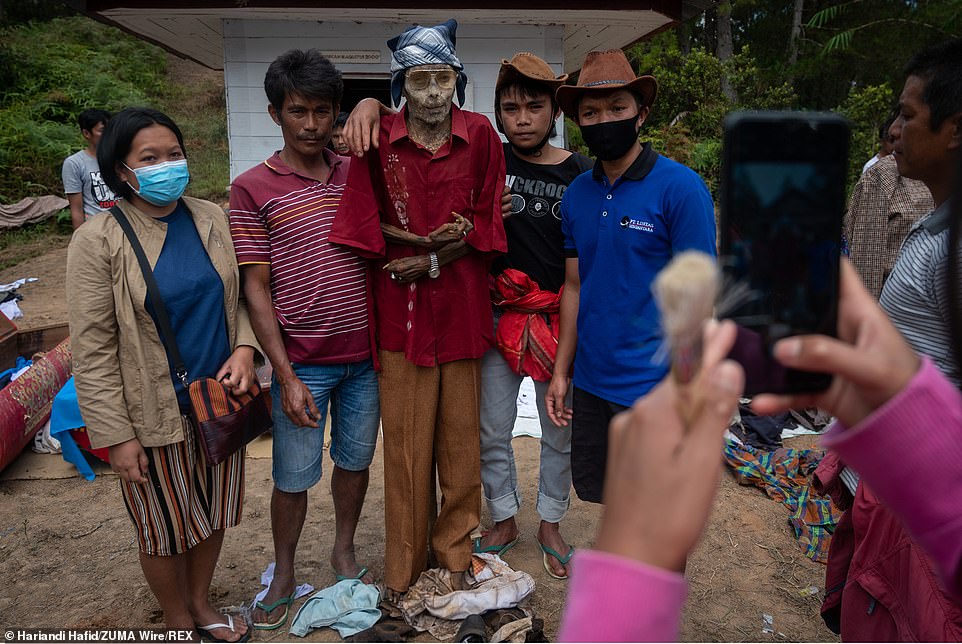 Families bring the bodies gifts including money, cigarettes and new clothes for the corpses to reinterred with after their families have spent time with them 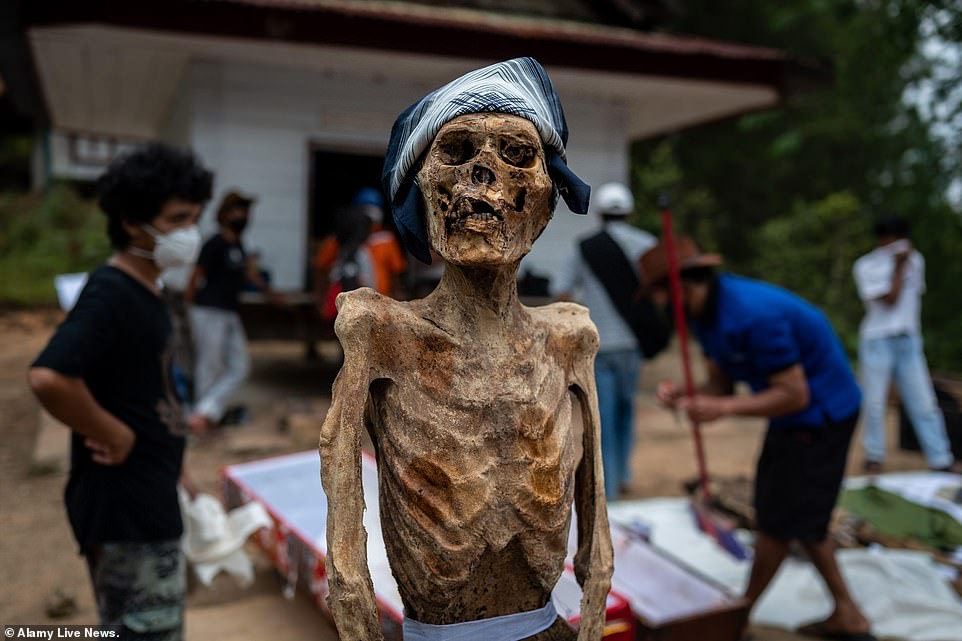 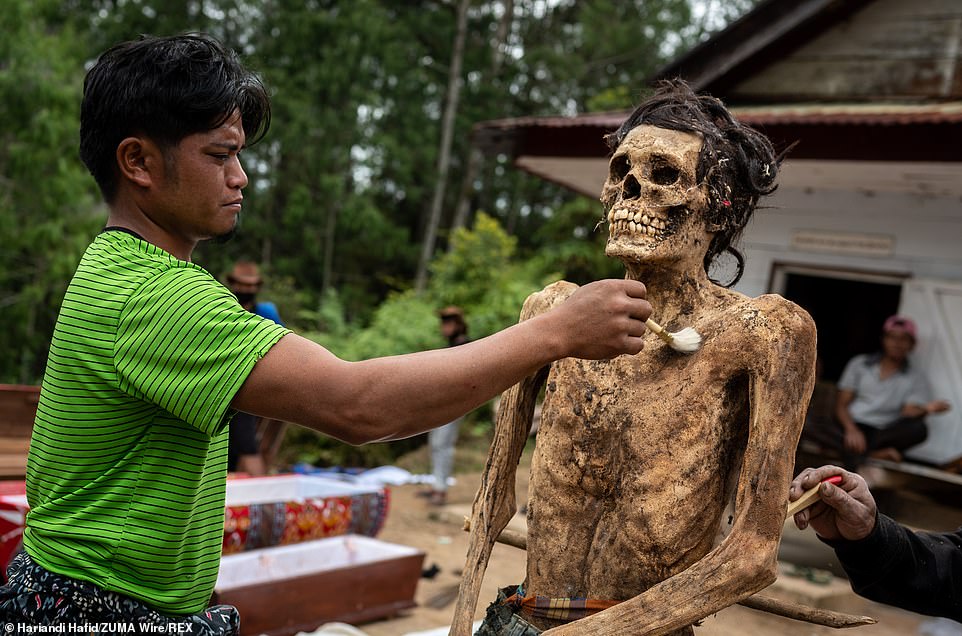 Although the Torja community still practise Ma’Nene, which is rooted in animistic beliefs, the majority of them are Protestant Christian 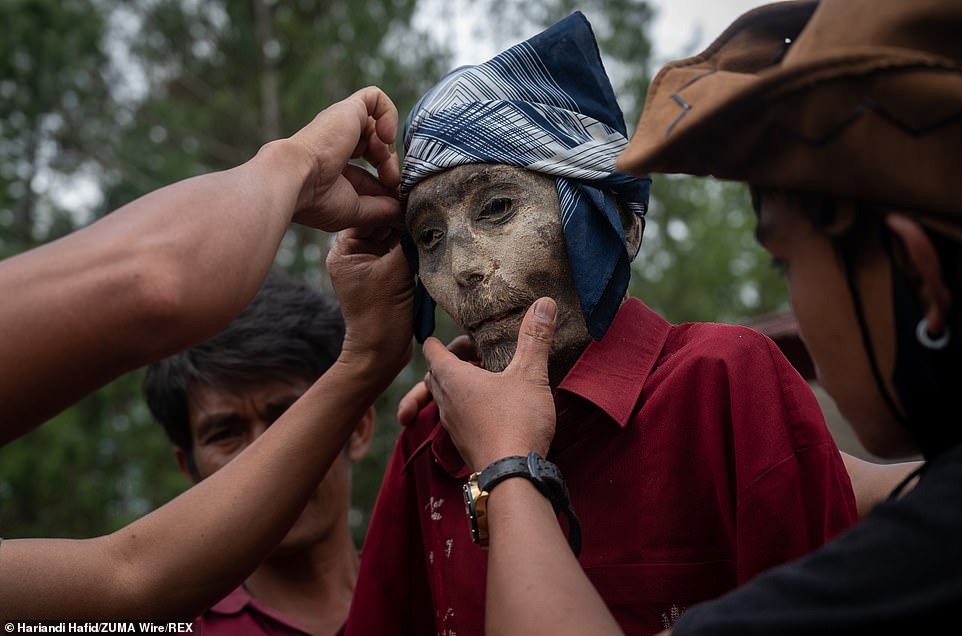 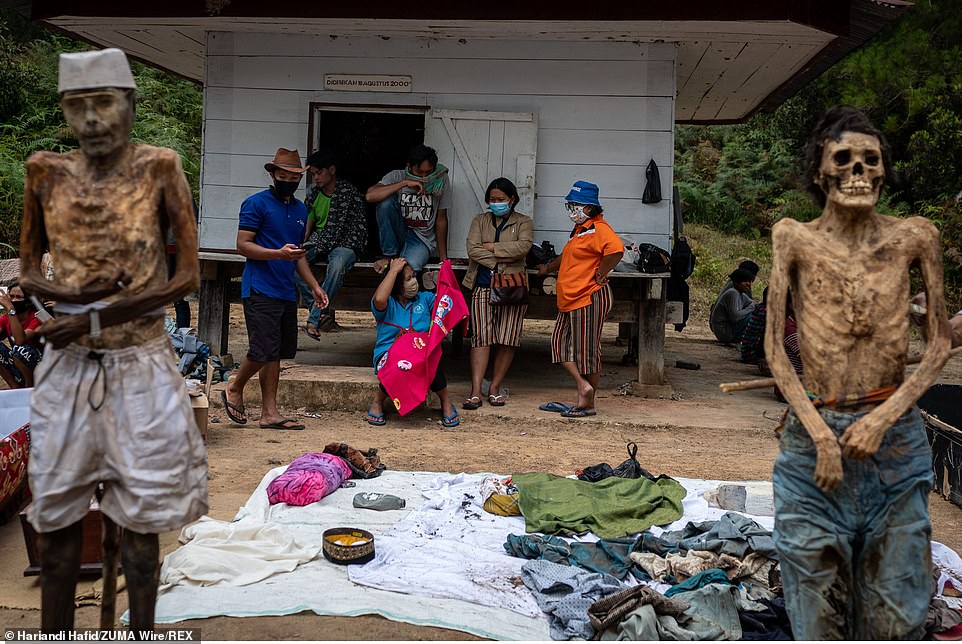 In the time before a burial, relatives talk to the deceased, offer them food and drink, and involve them in family gatherings, as if they are still alive 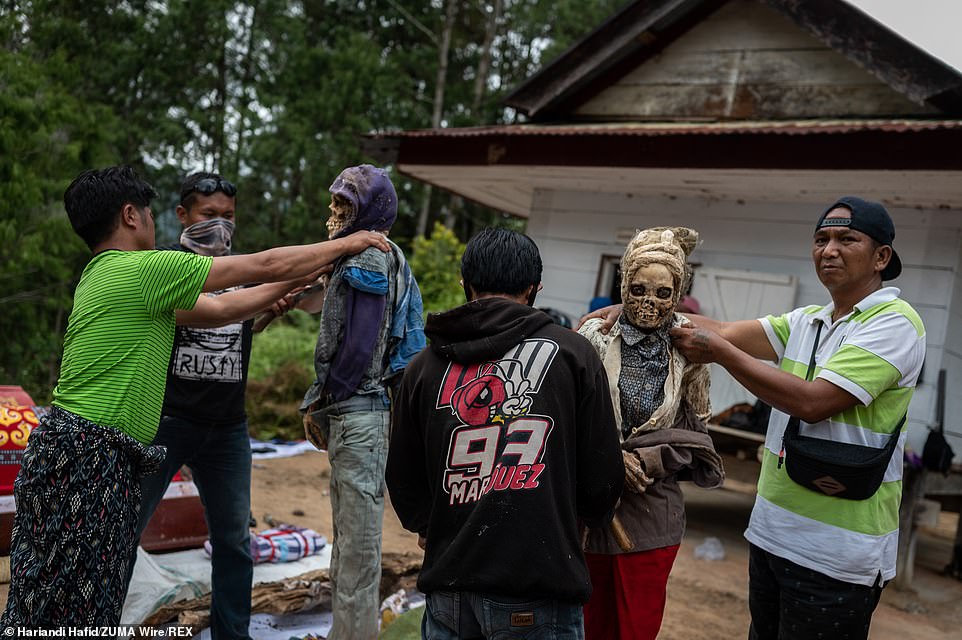 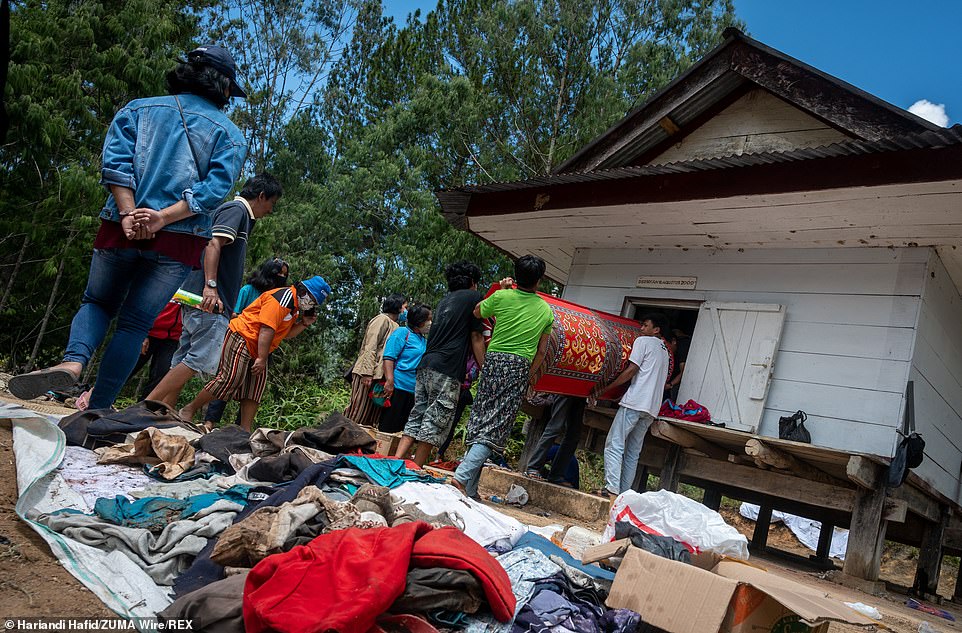 Palestinian leader declares end to all peace agreements with Israel, US