THAILAND'S eccentric king has reportedly pardoned his bodyguard ex-lover, released her from prison and flown her to join his harem of 20 girlfriends at a luxury hotel.

King Maha Vajiralongkorn –  also known as Rama X – is still "isolating" at the hotel in Germany which reportedly has a specially built "pleasure room" for him and his harem. 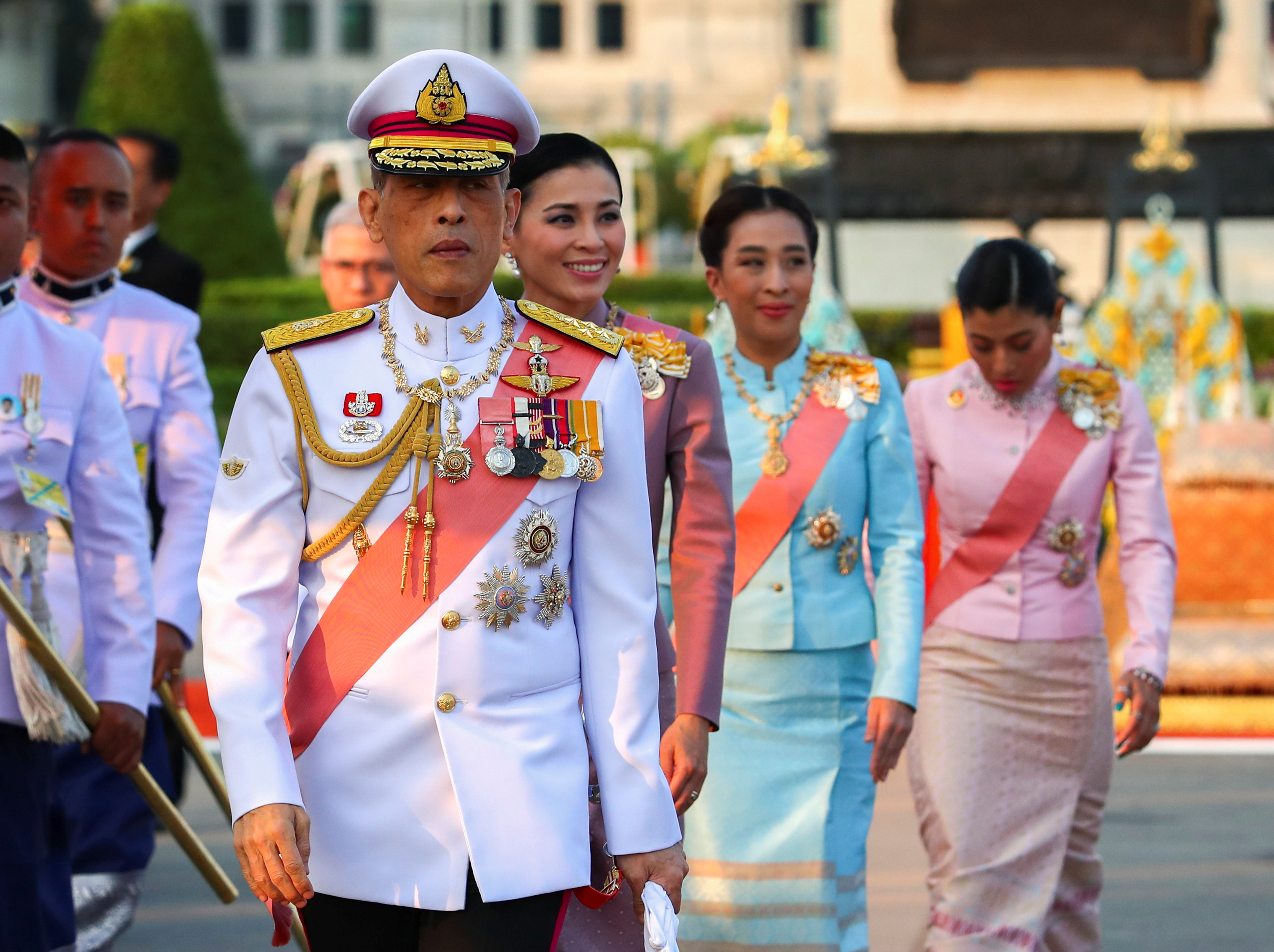 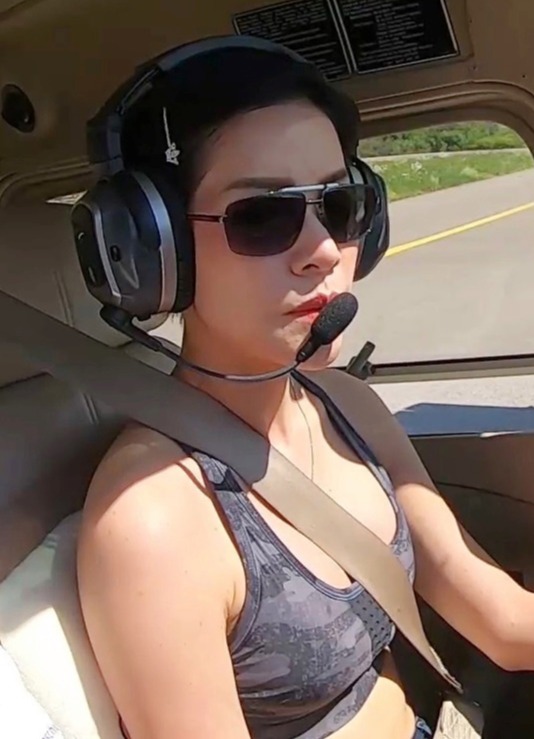 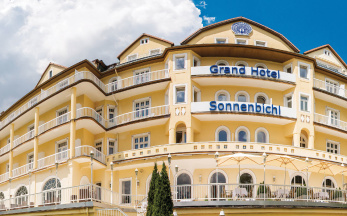 German newspaper Bild reports the Thai royal has released his former royal bodyguard and consort Sineenat Wongvajirapakdi, 35, after imprisoning her when the couple fell out.

Sineenat, a pilot, became the first royal concubine to be officially acknowledged in Thailand for almost 90 years.

He anointed her in a public ceremony in which she lay at his feet in front of his wife Queen Suthida.

He lavished her with titles and military ranks – promoting her to Major General – but she was stripped of all of this after her downfall last October.

She had reportedly been jailed at the Bang Kwang maximum-security prison ever since – being monitored closely on webcam.

The king is said to havereleased her and immediately flew her on his Boeing 737 to Germany – being picked up the king himself to Munich Airport on Saturday.

He then headed straight back to the Grand Hotel Sonnenbichl in Garmisch-Partenkirchen where he has been hunkered down during the pandemic.

Thailand expert and journalist Andrew MacGregor Marshall shared pictures appearing to show the two together as she disembarked the plane.

Rama X, 68, who has been the king since 2016, and his entourage reportedly occupy the hotel’s entire fourth floor.

He reportedly has a harem of up to 20 girlfriends with him at the hotel, who have been dubbed his "sex soldiers".

The king reportedly enjoys playing a kind of military role-play with them – and they all have military ranks, just like Sineenat had before she was put in prison.

He has reportedly had a "pleasure room" set up for his exclusive use, and has decked out his private floor at the resort with treasures and antiques from Bangkok. 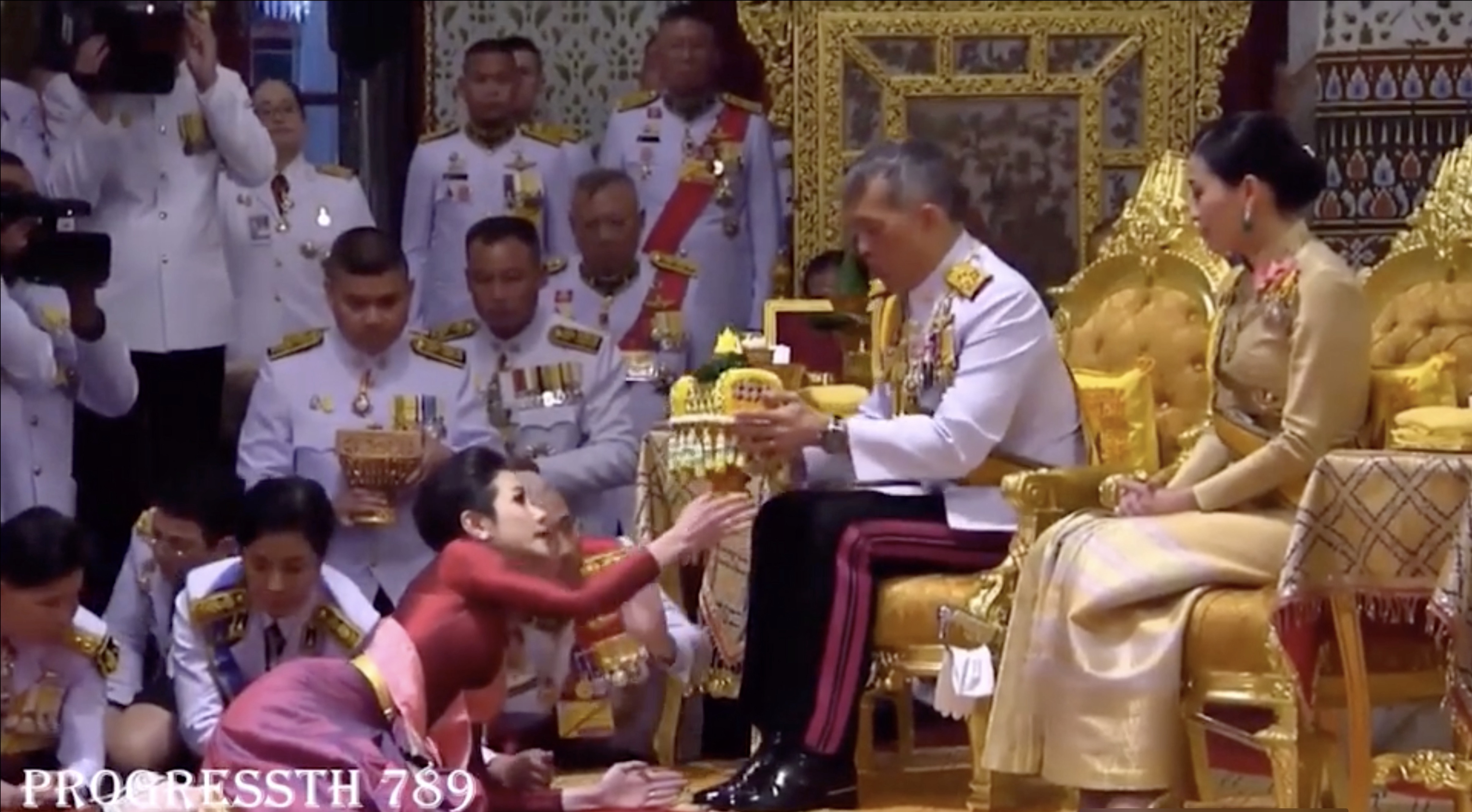 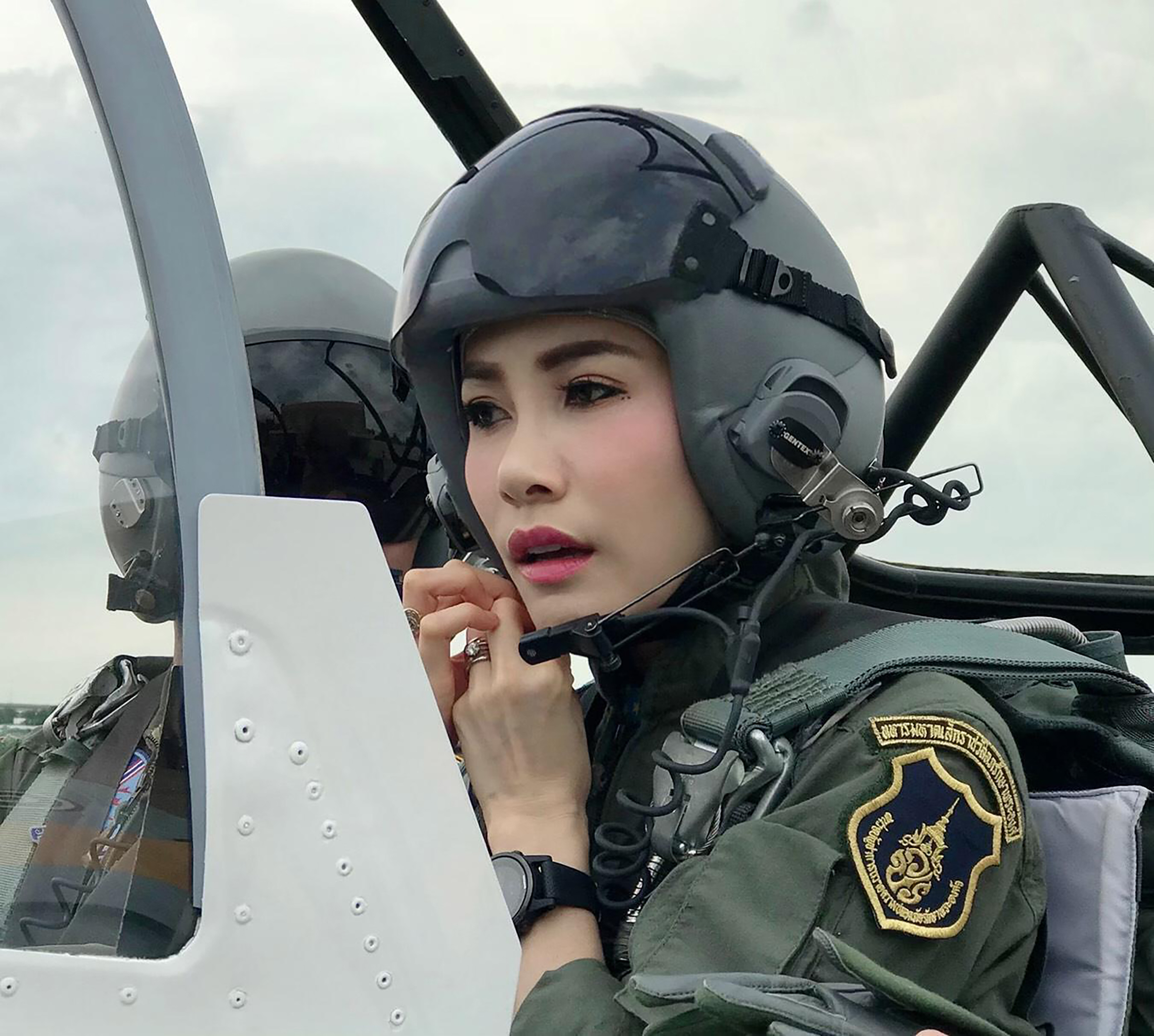 Reportedly the Thai king – who has an estimated fortune of around £25billion – had actually booked this stay at the hotel more than a year in advance.

He is known to have flown back and forth between Germany and Thailand, but always returned to the hotel to continue his "self isolation".

Sineenat had been feared by some to be dead after the falling out with Rama X, and had been accused of trying to "rise to the level of the queen".

Rama X got married last year to Queen Suthida, his fourth wife, who had been a Thai Airways stewardess, just months before he anointed Sineenat his concubine.

During the service Sineenat lay on the floor to remain lower than the King's feet, in accordance Thai royal tradition.

The move marked the first time a Thai king publicly had more than one partner since an absolute monarch ruled the country in 1932.

As he booted her out of the court months later, the king slammed her as "ungrateful", behaving in ways which are "unbecoming", and being "disobedient". 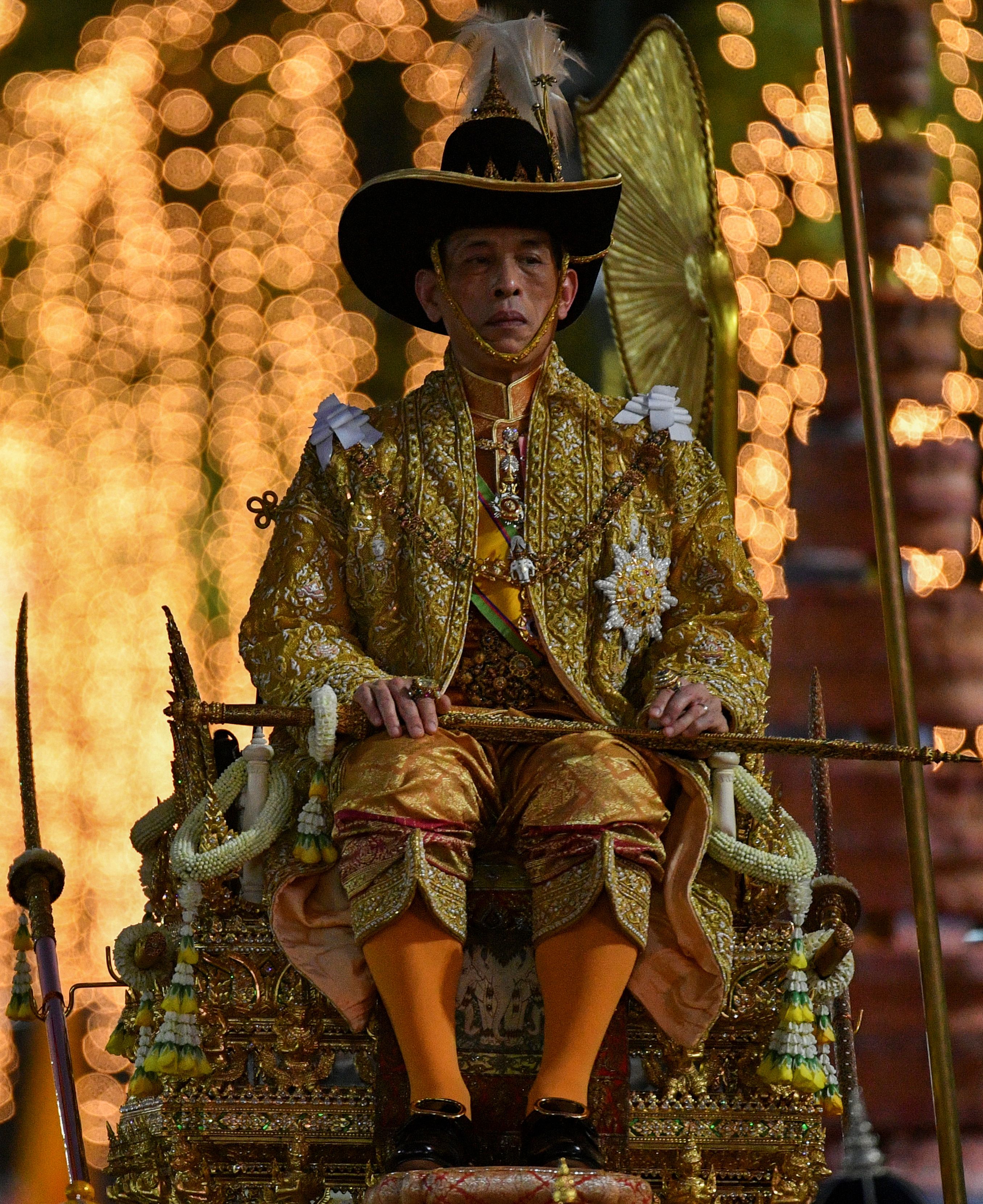 The four-star Grand Hotel Sonnenbichl had been given "special permission" to stay open during the pandemic because the party was classed as a "single household".

A former employee said: "It is said that when he comes he doesn't just fill up the top floor, but the safe as well."

The king is spending most of his time at the hotel, reportedly feeling connected to Germany due to an affinity with the Kaisers – whose rule was deposed in 1918.

He is said to own property on Lake Starnberg and he is also a frequent visitor in Upper Bavaria.

Earlier this year, Thailand expert Mr Marshall said: "The concubines give a lot – with the hope of winning big.

"Some are happy to join and are hoping for riches and success for themselves and their families.

"Others give in to the king's pressure to join over fear of the consequences if they refuse." 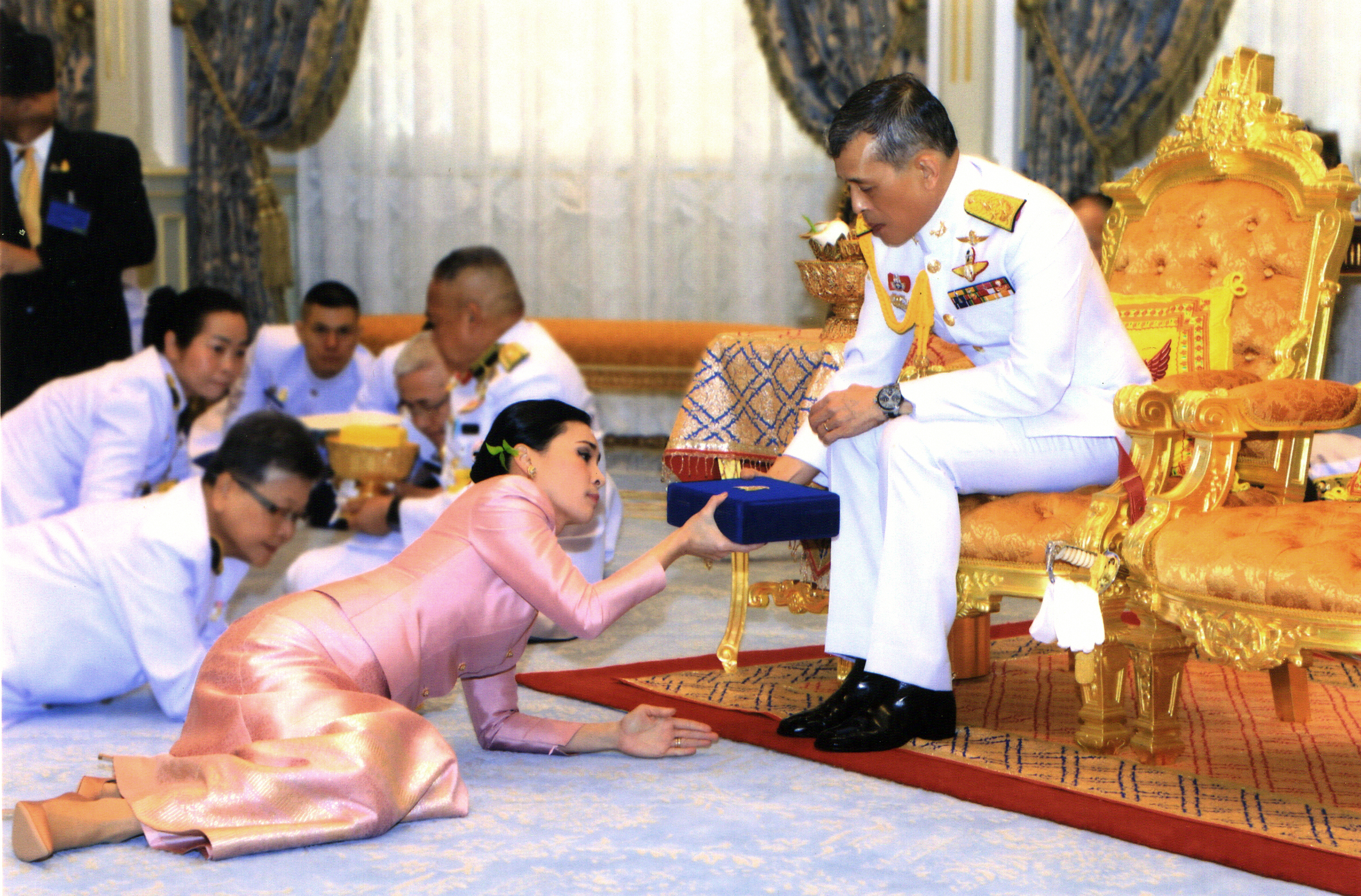 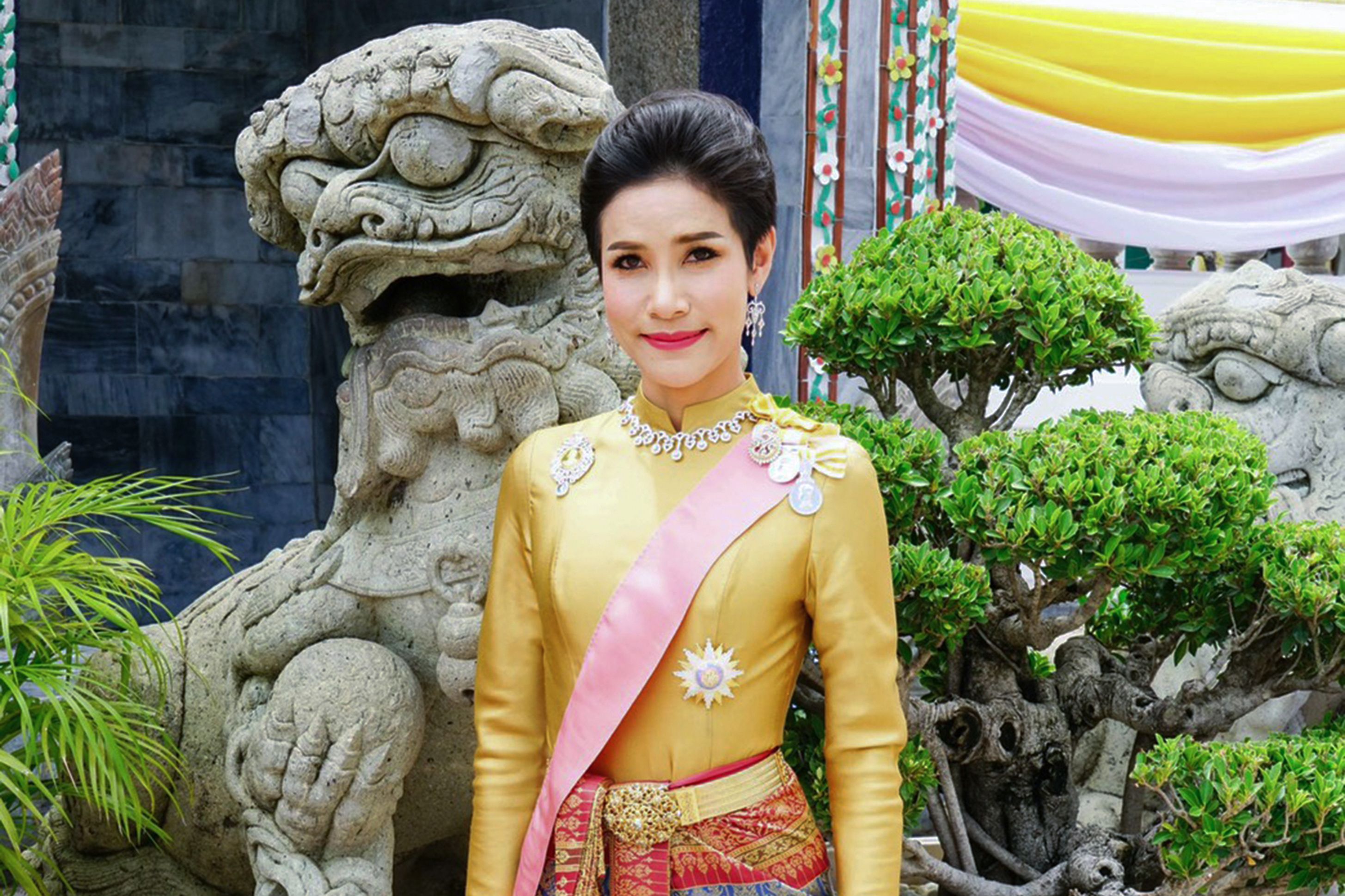 Rama X was crowned king last May, nearly three years after his father’s death, in a six-hour ceremony that cost £25million, and is known for his jet set lifestyle.

Previously, he made his his poodle Foo-Foo a chief marshal in the Thai air force – and when the pet died in 2015 and it was given a four-day Buddhist funeral.

And in 2017, Thai officials ordered the internet to wiped after pictures emerged of him taking a stroll wearing a tiny tight vest while out with a girlfriend emerged online.

His own mother Queen Sirikit branded him a womaniser, saying he is "a good boy, but women find him interesting and he finds women even more interesting".

News of the monarch's self-isolation was met with anger by tens of thousands of people in his homeland, who risked breaking the country’s laws by slamming him online.

Under the archaic laws, anyone who insults or criticises the monarchy faces up to 35 years behind bars.

The Worldwide Movement for Human Rights, a global federation of human rights organisations, says 105 people have been arrested under the law since 2014.

But a hashtag which translated to "Why do we need a king?" appeared 1.2 million times on Twitter within 24 hours of news breaking he was in Germany.

Cops 'extremely concerned' for schoolgirl, 15, who vanished in Leicester on Christmas Eve