Public school districts across Texas have begun handing out DNA identification kits to families that could help identify their children in ’emergencies,’ just months after 19 students were killed inside an elementary school in the Lone Star State.

After the shooting in Uvalde in May, parents lined up for hours to provide DNA samples to police to help identify the 19 children shot and killed.

The kits are being distributed to K-8 students to take home with them and be held onto by their parents in case of an emergency.

In the event of a school shooting or other tragic event, the parents can hand the identification card to law enforcement to help more easily identify their child.

The kits originate from SB-2158, a law passed in 2021 by Texas politicians and signed by Governor Greg Abbott. The intended purpose was to help locate missing or trafficked children. 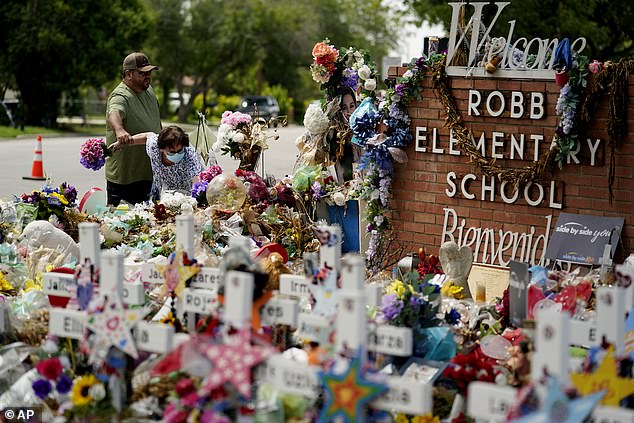 19 children were killed during a shooting inside the Robb Elementary School in Uvalde, Texas on May 24 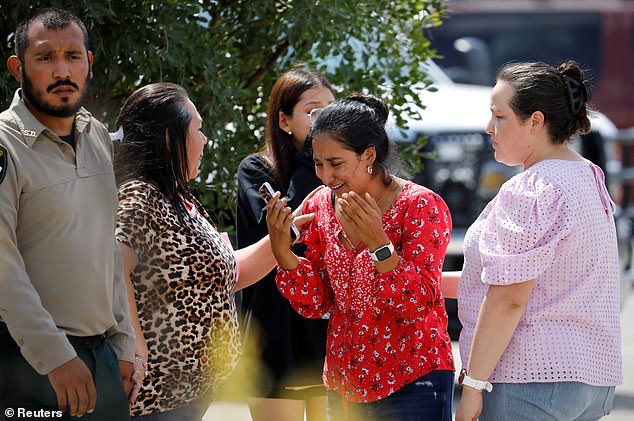 Heartbroken parents waited outside of the school for hours after the shooting, waiting to either be reunited with their child or to provide a DNA sample to possibly identify their son or daughter as a victim in the mass shooting 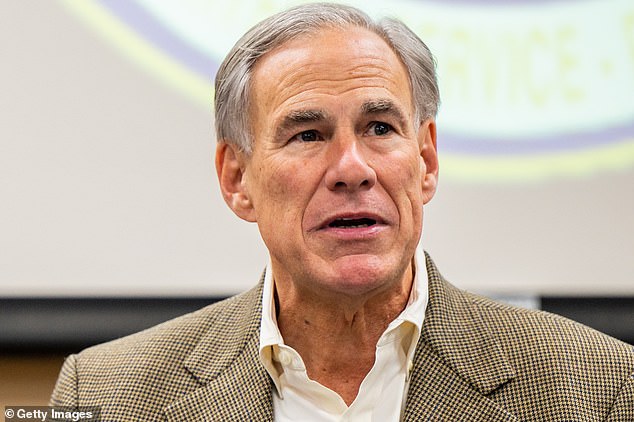 Texas Governor Greg Abbott has been harshly criticized for his pro-gun policies, which parents say put their children at risk of events like the Uvalde school shooting. The new law, signed by Abbott in 2021, helps to ID children in the case of an emergency, which opponents say is a reactive measure, rather than a proactive one

Each kit includes an inkless fingerprint, a spot for saliva, and a place for you to describe your child’s physical appearance, according to the Houston Chronicle.

The kits are being distributed to the districts by the Texas Education Agency.

A letter sent to parents and families within Texas’ largest school system, the Houston Independent School District, noted that the distribution would begin this week and that the kits are optional.

‘Caregivers are under no obligation to use the kits,’ a letter sent out to HISD principals obtained by the Houston Chronicle reads.

‘But they must be informed by your institution that the available kits will allow them to have a set of their child’s fingerprints and DNA in that they can turn over to law enforcement in case of an emergency.’

Kenneth S. Trump, a national school security consultant, told the Houston news outlet that he sees both positives and negatives in the kits.

‘On one hand, I see the value in saying, “Here’s a tool you can have in case of potential threats,”‘ Trump said. ‘But I think we need to be very cautious about crossing the line of do no harm to the point where we are creating more anxiety.’ 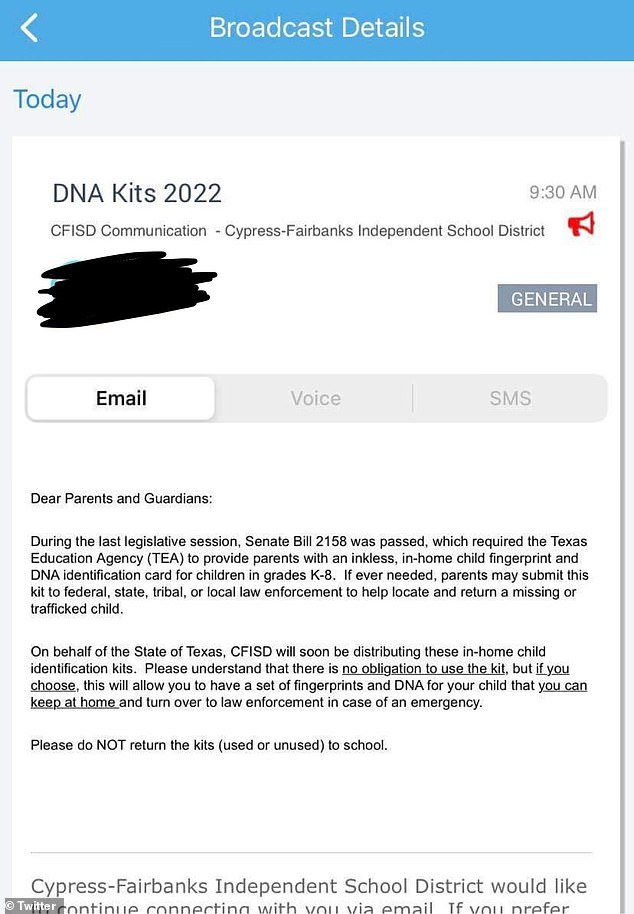 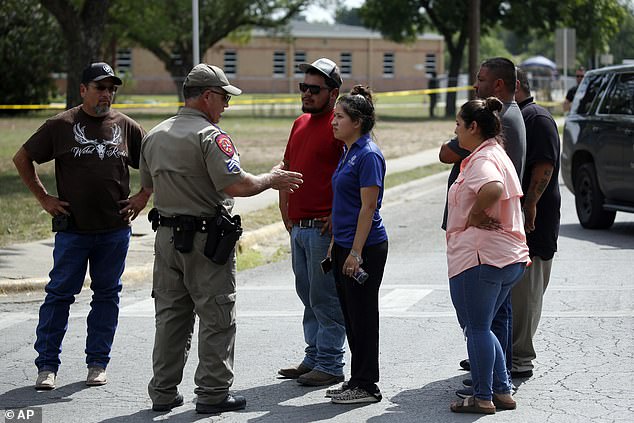 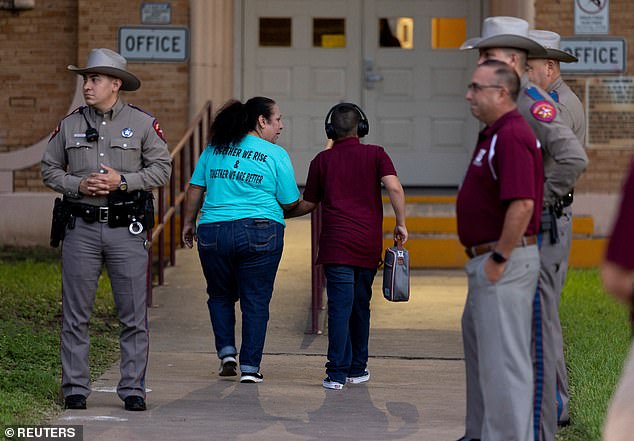 Some families went hours, well into the nighttime, without knowing where their child was or whether or not they had been shot and killed by the gunman

The kits are available to any student in elementary, middle, or junior high school, according to the law.

It’s unclear why the program is not available for Texas high school students.

The Child I.D. kits could go out to some 3.8 million students within the Texas public school system.

While not originally proposed in connection to the shooting at Robb Elementary School in Uvalde, the kits do highlight a disheartening moment from the saga.

At one point after the May shooting, parents lined up to provide swabs of their child’s DNA, desperate to identify them. 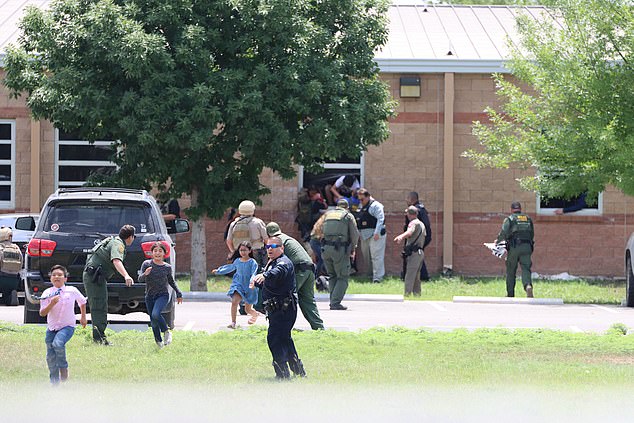 Children could be seen fleeing from the scene after a gunman opened fire inside a Uvalde, Texas elementary school

Grim footage showed heartbroken parents waiting to speak with officials to find out if any of the remains located inside the school matched with their son or daughter.

The families waited outside the Robb Elementary School’s auditorium and loud sobs could be heard throughout the day and into the evening.

At least five family members who had been waiting with their child’s DNA at the school were informed that their child had been murdered. 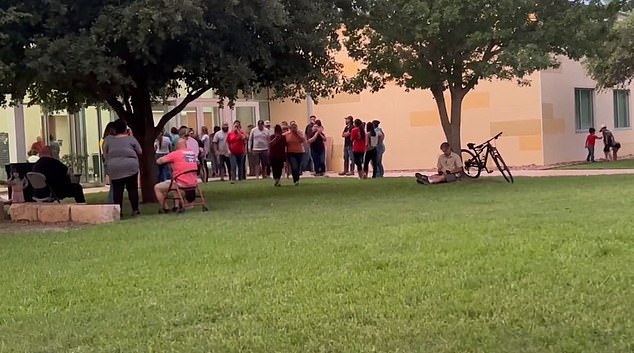 The video went viral on social media for its grim depiction of the reality of the situation.

Some believe that the Child I.D. kits being handed out could prevent a scene like this from happening again.

Parents within at least one Texas school district have already been told that they can pick up a kit any time.

Families of children inside Clear Creek Independent School District are able to have their child’s DNA kit ready to go at any moment.

Despite some saying that the intentions are admirable, many parents and families say that they find the idea grim and unsettling. 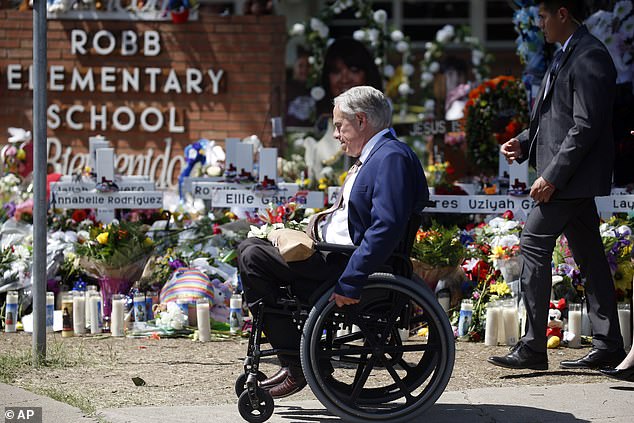 After the shooting at Robb Elementary School in May, Texas Gov. Greg Abbott visited the scene were 21 people were killed. Abbott was met by some parents and families who were upset over his lax stances on guns like the one used in the Uvalde shooting

‘This is certainly unique,’ said Clear Creek ISD Spokesperson Elaina Polsen told ABC 13. ‘I would agree this is a role that we haven’t played in the past as a school system.’

Despite some saying that the intentions are admirable, many parents and families say that they find the idea grim and unsettling.

‘It was almost like the state just throwing their hands up and saying, ‘We can’t do anything about the guns. We’re not going to change any of the laws. So, therefore, the next best thing is to make sure that we can identify your K through eighth grader if they are killed in any type of school incident,” Anthony Crutch, a parent in Texas said. 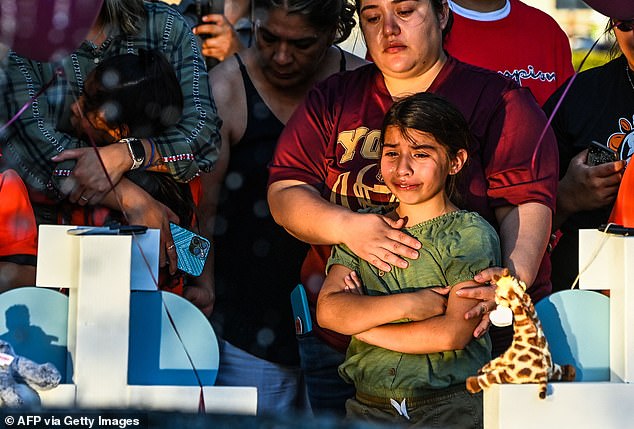 The father did say that he and his family are going to use the kit, but are not happy about the situation.

‘When I receive them we’re going to complete the kit and store it in the cabinet and pray to God nothing happens,’ said Crutch.

Gov. Abbott signed the bill into law in July 2021, thanking the bill’s original author in a social media post at the time.

ABC13 reached out to the bill’s sponsor Senator Donna Campbell. Her office said the kits were meant for parents to use in case a child goes missing.

The National Child Identification Program previously worked with the state of Texas to hand out the cards to parents of kindergarteners.

That, however, happened during Rick Perry’s time in office more than a decade ago.

The idea has sparked outrage from those on the political left, saying that more needs to be done to prevent tragedies like Uvalde, rather than just prepare for them.

O’Rourke, a former presidential and U.S. Senate candidate, said that the kits are a sign of ‘Greg Abbott’s Texas,’ in a tweet attacking his political opponent. 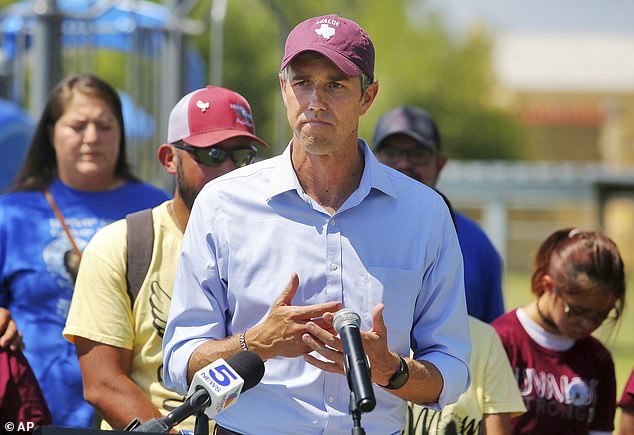 Beto O’Rourke has been outspoken regarding his distaste for Texas Governor Greg Abbott and his policies surrounding guns, especially in the wake of the Uvalde mass shooting 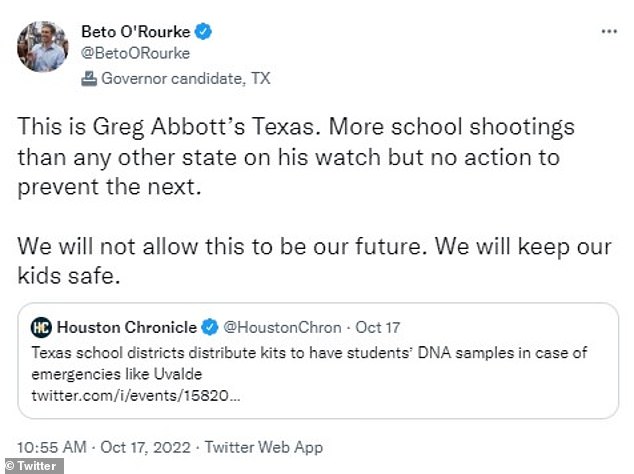 In a tweet Monday, the Texas gubernatorial candidate said that he is more focused on stopping shootings than he is to reacting when one happens

‘This is Greg Abbott’s Texas. More school shootings than any other state on his watch but no action to prevent the next,’ the Texas Democrat said.

‘We will not allow this to be our future. We will keep our kids safe,’ O’Rourke continued in a post Monday on Twitter.

O’Rourke has heavily campaigned on gun control ahead of the November showdown between himself and the incumbent.

After the May shooting, the politician renewed his calls for a ban on assault weapons.

‘It is insane that we allow an 18-year-old to go in and buy an AR-15. What the hell did we think he was gonna do with that?,’ O’Rourke said after the shooting.

‘If you want a solution, stop selling AR-15s in the state of Texas,’ O’Rourke said during a passionate speech held outside of Robb Elementary. 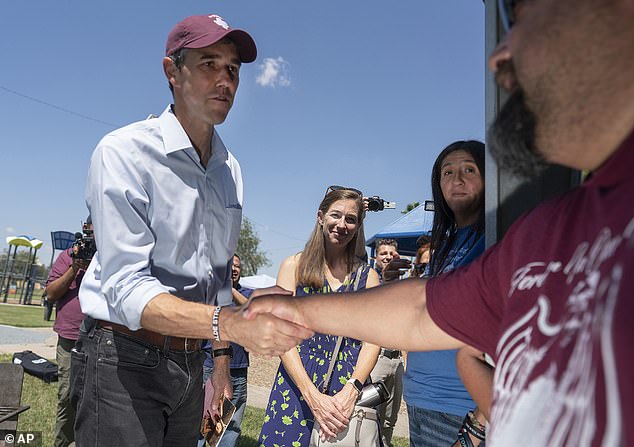 O’Rourke has called for a ban on assault weapons like the one that the shooter used to kill 21 people inside a Uvalde, Texas elementary school

Earlier this month, families of some of the Uvalde victims held a press conference with Texas Democrats to call for action on guns in the state.

‘Greg Abbott has abandoned us,’ said one family member.

The group is asking to change the age that a person is able to purchase a gun in Texas, saying that the senseless tragedy could have possibly been avoided with stricter laws.

They also asked Gov. Abbott to consider universal background checks and red flag laws aimed at keeping guns out of the hands of anyone who presents a serious threat.

‘We will push and we will meet. We will send emails, we will march, we will advocate,’ said one person during the press conference.

Among those who also expressed anger was California Governor Gavin Newsom, a Democrat.

Gov. Newsom criticized the idea of sending the kits rather than taking action before a shooting occurs.

‘Greg Abbott’s solution to gun violence? Send DNA kits to schools so parents can identify their kids’ bodies AFTER they’ve been shot and killed,’ the California politician said on Twitter. 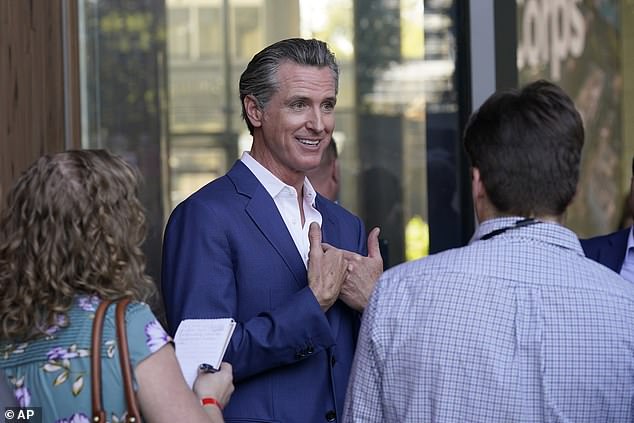 California Governor Gavin Newsom also chimed in on the controversial Child I.D. kits in a tweet Monday, critiquing the plan

‘Texas Gov Greg Abbott is choosing to send DNA kits to schools that parents can use to identify their children’s bodies AFTER they’ve been murdered rather than pass gun safety laws to proactively protect their lives,’ Watts wrote.

Moms Demand Action is a subgroup of Everytown Gun Safety.

According to Watts’ bio on the organization’s website, she started Moms Demand Action as a Facebook group ‘the day after the Sandy Hook tragedy.’

20 children, all under the age of eight, were killed inside Sandy Hook Elementary School in Newtown, Connecticut on December 14, 2012.

The woman started Moms Demand Action, believing that ‘all Americans can and should do more to reduce gun violence.’

Minister fears vaccine take-up may be lower among BAME communities