Washington: A strange and unsettling statue depicting notorious Confederate general and Ku Klux Klan leader Nathan Bedford Forrest has been removed from the side of a highway in Nashville, Tennessee.

Long considered an eyesore by residents of the city, the statue was ordered taken down by the executor of the estate of Bill Dorris, the Nashville businessman who erected it there in 1998, according to News Channel 5 in Nashville. 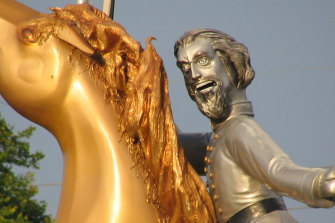 The Nathan Bedford Forrest statue in Nashville, Tennessee, has been taken down.Credit:Brent Moore/CC

The executor told the TV station the statue would be placed in storage and perhaps put up for sale, although selling it might be difficult. Images of the removal taken by a news helicopter appeared to show part of the statue shattered.

The 7½-metre statue depicting Forrest on a horse, gun in one hand and a sword in the other, was made of fibreglass and polyurethane and covered in gold and silver leaf, which detractors said looked like candy wrappers. Forrest’s mouth is agape, revealing a frightening set of chompers, and blue marble “eyes” give it an axe-murderer vibe.

In recent years, the statue was vandalised with hot-pink paint, which Dorris decided not to remove, calling pink “a real good colour”. The statue was also surrounded by Confederate battle flags, which will stay in place for now, the executor told Channel 5. 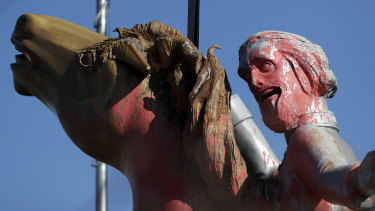 The Nathan Bedford Forrest splattered in pink in 2017.Credit:AP

The paint-throwers weren’t the statue’s only critics. In 2006, local blogger Brent K. Moore described it as having “an expression that one makes after sitting on a thumb tack”. Writing for a local travel guide, Cheryl Hiers said, “Anyone seeing the crazed, pop-eyed look on the statue’s face might wonder if the memorial is a homage, or a savage put-down”. The Nashville Metropolitan Council also tried unsuccessfully to get permission from the state to hide it with landscaping.

The statue gained national attention in 2015 after the murders of nine black church parishioners in Charleston, South Carolina, and amid new scrutiny of Confederate memorials. MSNBC host Rachel Maddow called it “terrifying”. Gawker’s Sam Biddle said it was “the dumbest looking statue I’ve ever seen in my life, including statues of cartoon characters located inside cartoon shows”. Comedian Stephen Colbert described it as showing that the Confederacy was “founded by skirt-wearing nutcrackers riding wet lizards”; John Oliver said it looked “like if a nickel did cocaine”.

The statue had a strange provenance to match its non-traditional appearance. Rather than being commissioned by a local government, the Forrest statue was erected in 1998 on Dorris’ private property, facing Interstate 65 in a highly visible spot. Moore, the local blogger, claimed Dorris put the statue there in retaliation after the city declined to rezone that part of his property for a storage facility.

Whether it was designed to be an eyesore or not, Dorris didn’t pretend to like the work of the sculptor, his friend Jack Kershaw. But that was beside the point.

“As an artist, mediocre,” Dorris told public-radio station WPLN in 2011. “As a thinker, he was way ahead of his time.”

And what sort of thinking was that? Well, Kershaw was a co-founder of the white supremacist group League of the South, and as a lawyer defended James Earl Ray, the man convicted of assassinating the Reverend Martin Luther King jnr.

Kershaw once told the Times-Picayune of New Orleans that “somebody needs to say a good word for slavery” – that somebody, of course, being him.

Dorris, for his part, said slavery was a form of “social security” for African Americans and argued that he could not be racist because he had many black people “working for him”. 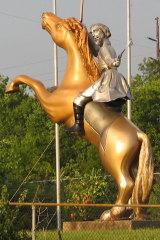 Kershaw constructed the statue using materials from Dorris’ business, which made bathtubs for the elderly.

When Dorris died in 2020, he left his assets to be divided among the Sons of Confederate Veterans, the Battle of Nashville Trust and his border collie, Lulu.

Of the Confederate leaders whose legacies have been reconsidered in the past several decades, perhaps none has experienced as severe an about-face as Forrest. As late as the 1990s, actor Tom Hanks, as the main character in the hit movie Forrest Gump, described being named after “the great Civil War hero”. Beloved Southern novelist and historian Shelby Foote kept a portrait of Forrest on his desk, and in Ken Burns’s massively popular documentary series The Civil War, Foote described Forrest as a “genius” and “born to be a soldier the way John Keats was born to be a poet”.

In recent years, the revisionist shimmer on his deeds has worn off, and he has been accurately described as a slave trader, the commanding officer who oversaw the massacre of hundreds of Black Union soldiers at Fort Pillow, and the first grand wizard of the Ku Klux Klan.

In June, his remains were exhumed from a Memphis park named after him, and the park has since been renamed. A bust of Forrest in the Tennessee Capitol building also has been removed.

Girl, 3, ‘found bleeding from bullet wound to her chest after being hit in Chicago drive-by shooting’ while playing – The Sun