A man shoved an NYPD cop to the ground and tried to strangle the officer with a chain during Lower Manhattan protests on Thursday night, according to police.

The alleged attack occurred near Bond Street and Broadway in the Greenwich Village during the second consecutive night of demonstrations in the area that led to 18 arrests, police sources said.

The NYPD tweeted out a photo of the chain with the message: “Violence – in any form – is unacceptable. We will be reviewing this incident, and bring any additional perpetrators to justice.”

Meanwhile, Public Advocate Jumaane Williams and members of the press were shoved by police during another Lower Manhattan clash on Thursday night.

“Our Public Advocate @JumaaneWilliams has a long history of going to protests specifically to join with New Yorkers while de-escalating tensions. There’s no sense in this, @NYCMayor. Where are you?,” state Sen. Brad Hoylman tweeted. 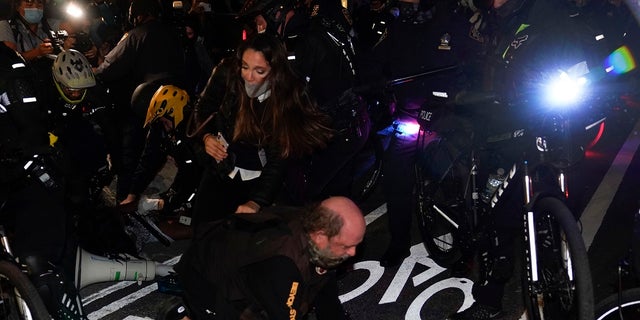 New York Police bike patrol officers corral demonstrators and members of the media during a march through the West Village, on Thursday. (Associated Press)

State Assemblywoman Yuh-Line Niou added: “Pushing @JumaaneWilliams our public advocate?! This is not appropriate! What is going on right now?!”

And in Union Square, 1010 WINS radio reporter Roger Stern fell to the ground near the park’s steps when police there tried to control the crowd using their bikes.

Johnny Depp was never violent to me, ex-fiancée Winona Ryder will say