Supermarket shelves have been stripped bare of fresh vegetables, bread and toilet roll on the first day of Britain’s third national lockdown.

Queues formed outside stores last night ahead of the start of the new restrictions, in which Britons have been told to stay at home, other than to make essential trips.

Grocery shopping comes into that category but panic buying, seen at its very worst in the first lockdown in March and April, has continued, with stocks of popular products emptied in some stores this morning.

At Sainsbury’s and Asda stores in Swindon today, shelves of toilet roll and fresh fruit and vegetables were bare after being frantically snapped up.

While supermarket bosses have looked to reassure customers that they have strong availability across stores and depots, they have called for calm and responsible shopping.

Most of the major supermarkets don’t have limits on the number of products that can be bought, though Tesco brought in some caps before Christmas and Lidl says store managers can use their discretion to limit shops if the chaotic scenes of last year are repeated. 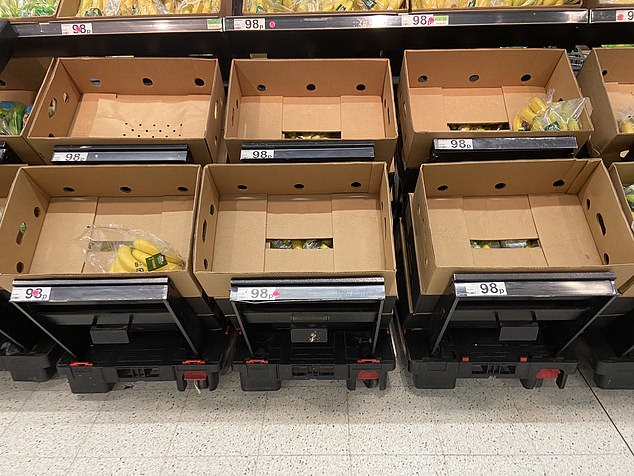 Supermarket shelves have been stripped bare of fresh vegetables, bread and toilet roll on the first day of Britain’s third national lockdown 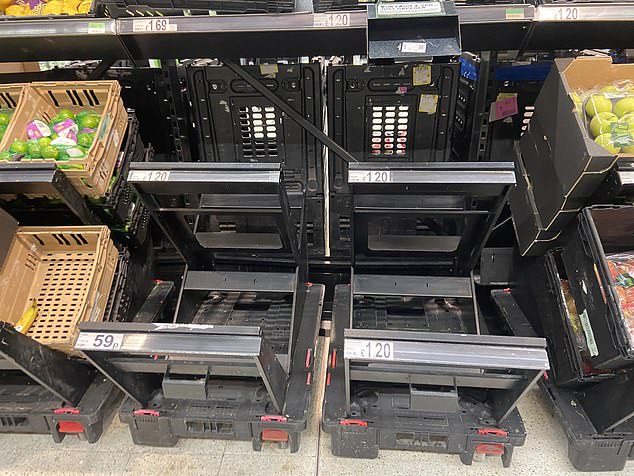 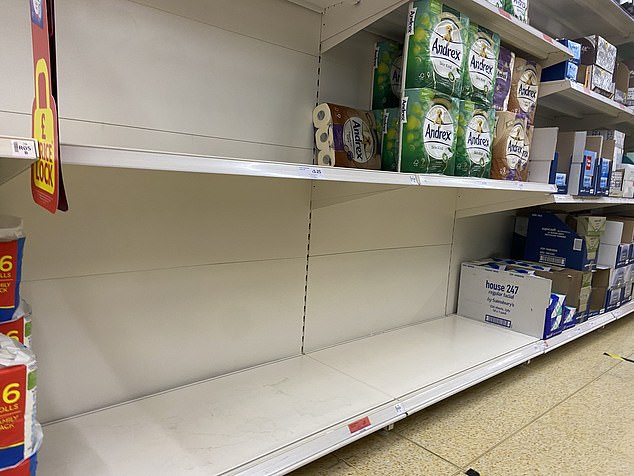 In scenes reminiscent of the chaos of March and April, shelves stocking toilet roll were left bare at this Sainsbury’s store in Swindon

What restrictions have supermarkets put in place during the third lockdown in England?

Asda: No restrictions on buying. Safety measures include 1,000 marshals at the front of stores and antimicrobial handles on basket and trolley handles

Aldi: No restrictions on buying. First hour of business on Tuesdays and Thursdays for vulnerable shoppers.

Lidl: No restrictions on buying, but managers can use their discretion to limit shops if panic buying is observed.

Tesco: Buying limits of three per person on products at stores such as bottled water, pasta and toilet rolls.

Morrisons: No restrictions despite previous limits imposed. Priority hour for NHS from 6am six days a week.

Sainsbury’s: No restrictions on buying. Priority for NHS for half an hour from 7.30am on Monday to Saturday.

Waitrose: No restrictions on buying in store, but ‘some caps on a limited range of products on waitrose.com’ to help manage distribution.

Asda chief executive Roger Burnley said: ‘As COVID restrictions are tightened across the UK to protect our health, we will continue to do all we can to keep colleagues and customers safe in store as we have since the start of the pandemic.

‘Our stores and distribution centres have proved to be highly resilient to the challenges of a national lockdown and we are confident that we can continue to deliver choice and value for customers in the weeks ahead.

‘We are asking customers can play their part too by continuing to shop considerately and respecting social distancing when they visit our stores.’

Meanwhile in the Scottish town of Kirkcaldy last night, shoppers had to endure lengthy queues just to get inside stores.

One told the Daily Record: ‘It was like a cattle market inside folks going all ways. People are getting greedy, there’s just no need, there was never not enough before.’

The Sainsbury’s app was under such high demand that the retailer had to temporarily limit access, while there were nearly 15,000 people queuing on the Ocado website and others were reporting problems paying on the Tesco app.

It comes as data on supermarkets from Kantar revealed the record December helped sales jump 11.4 per cent to £32.7billion over the 12 weeks to December 27.

Supermarket trading was boosted by the £4billion that would normally have been spent on food and drink outside the home over the Christmas season.

The report showed online grocery sales accounted for 12.6 per cent of total spend in December, compared with 7.4 per cent in 2019.

Ocado ended the year as the country’s fastest growing retailer.

Fraser McKevitt, head of retail and consumer insight at Kantar, said: ‘December is always an incredibly busy time for supermarkets, but take-home grocery shopping is usually supplemented by celebrations in restaurants, pubs and bars – with £4 billion spent on food and drink, excluding alcohol, out of the home during the normal festive month.

‘This year, almost all those meals were eaten at home and retailers stepped up monumentally to meet the surge in demand.’

He added that the port disruption ahead of the Brexit deal deadline meant shoppers brought forward their Christmas shopping, with Monday December 21 the busiest shopping day of the year.

‘Fifteen million households – more than half the entire population – visited a grocer at some point that day and spent a collective £819 million,’ he said.

‘This is a real step change from recent years when consumers have typically completed their ‘big shop’ closer to Christmas Day.’

Morrisons was the best performer of Britain’s big four grocers with sales up 13.1 per cent year-on-year over the 12 weeks. Its market share moved up by 0.1 percentage points to 10.4 per cent, its highest level since June 2019.

Kantar said grocery inflation was 1.3 per cent for the 12-week period, with prices rising fastest in markets such as canned coke, fresh pork and chilled deserts while falling in vegetables, fresh beef and bread.

Soldier who amputated leg to save tank crew: 'It's the best thing that's ever happened to me'