REVEALED: The kingpins who operate the Channel trafficking rackets and the UK lawyers who coach asylum seekers to help them avoid deportation as SUE REID provides the most detailed account of the deadly human trade yet

He poses proudly for his picture outside the magnificent town hall in the French port of Calais.

Wearing a black bomber jacket bearing the distinctive insignia of the Chicago Bulls basketball team and with a chunky watch on his left wrist, this is the man at the centre of a people-smuggling gang making millions fleecing migrants for boat rides to Britain.

A fine sailor, he is a Kurd who was brought up on Iran’s Caspian Sea, which is renowned for its fishing and boating and where watercraft is taught from childhood. 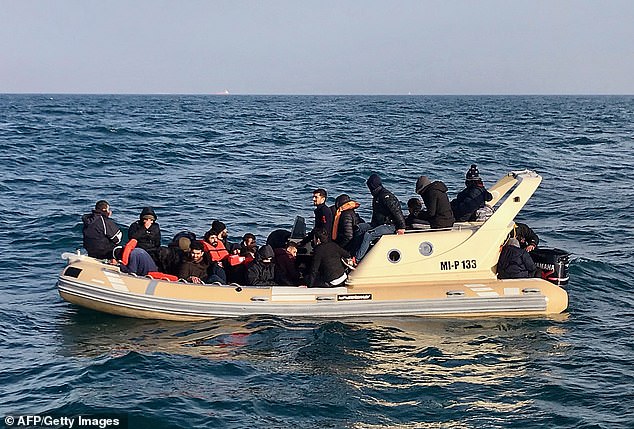 Even this week, with most of the world’s international travel channels floundering, the trafficking gangs continued to flourish. Indeed, the Home Office says 34 people smugglers have been convicted in British courts recently for facilitating illegal migration into the UK, by boat or plane, or in cars and lorries

The Mail has spent weeks investigating this smuggler after being given his name and shown his social media accounts and a photo of him by Iranian and Iraqi migrants waiting in Calais to cross the Channel earlier this year.

The migrant informants revealed that he was the pilot of a rigid inflatable boat (RIB) which set off from France on a calm winter’s day last year, with 34 migrants, including women and children, bound for the Kent coast.

Its arrival on February 18 caused a huge controversy because it contained the highest number of migrants in one craft that had ever made the illegal crossing at that time.

A photo of the overburdened vessel in the Channel was released by the French charity Societe Nationale de Sauvetage en Mer, the equivalent of our Royal National Lifeboat Institution, before the migrants were brought safely to Dover by Britain’s Border Force. 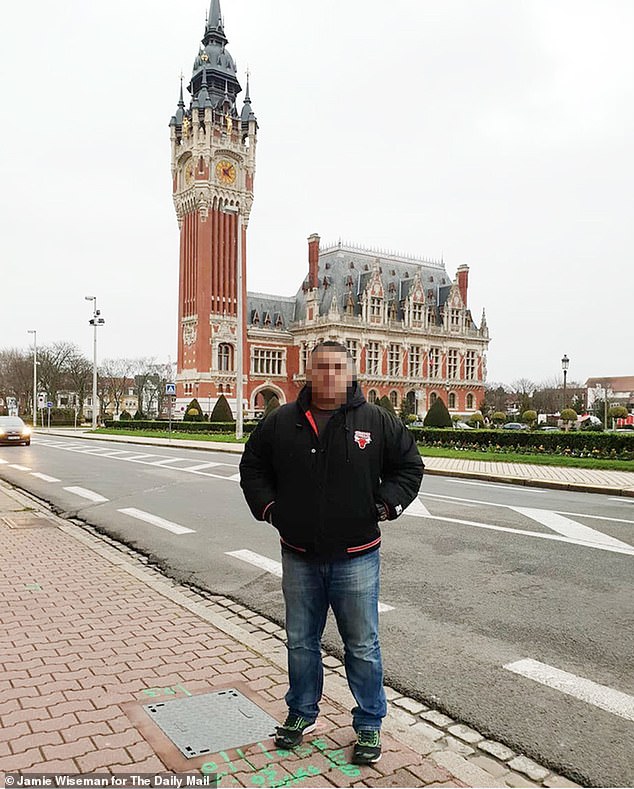 Wearing a black bomber jacket bearing the distinctive insignia of the Chicago Bulls basketball team and with a chunky watch on his left wrist, this is the man at the centre of a people-smuggling gang making millions fleecing migrants for boat rides to Britain

When we scrutinised that photo, our information from the migrants was correct. A man can clearly be seen at the helm in a black jacket with the same distinctive insignia and white mark on its sleeve, as well a heavy watch on his left wrist.

It provided a second independent confirmation that he is an important cog in the cross-Channel people-smuggling trade.

The smuggler — whom we shall call Black Jacket — is believed to have been questioned by Border Force officers, along with the other 33 in the boat, when he arrived in Dover last year. But his current whereabouts are unknown, although he is not thought to have been arrested.

During our investigation, we found a lengthy silent video posted by Black Jacket on Instagram, showing an empty beach 30 minutes’ drive from Calais in the seaside village of Ambleteuse.

The migrants we have spoken to over many months say Ambleteuse has been overlooked by the French and British authorities seeking the launching beaches.

Crucially, the video was uploaded a month before the vessel carrying the 34 migrants arrived in Dover, and may have been the starting point for that illicit journey.

The video appears to be part of a reconnaissance by the boat driver. It may even have been posted as a way of guiding migrants for the crossings.

Meanwhile, we have also discovered the identity of the smuggler’s boss — let us call him ‘Mr Big’ — who is in charge of the north French coast smuggling operation.

As well being shown a photograph of him, his name was given to us by migrants we interviewed along the French coast, though we are choosing not to publish it. 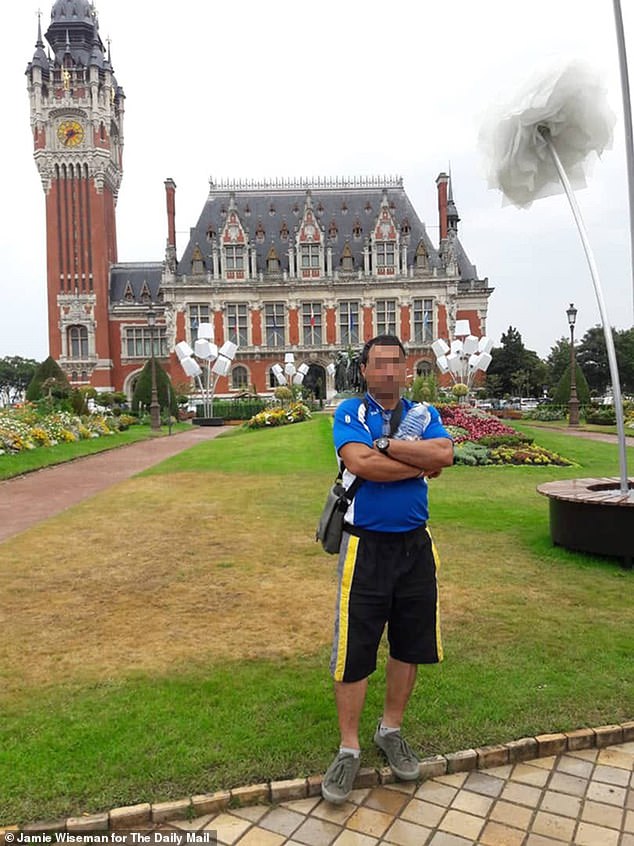 Like Black Jacket, it is posted on his personal social media site. In an astonishing piece of chutzpah, he is also pictured posing outside Calais town hall, wearing shorts and sporting a smile and a confident pose.

On his social media sites, Mr Big, also an Iranian Kurd from the Caspian Sea region, claims to live in the North of England. He has posted pictures of a boy, aged ten or 11, in a British primary school uniform. It is not known whether this child is a relative.

Mr Big is also pictured in Germany and at the Bull Ring shopping centre in Birmingham, less than half a mile from a migrants’ centre where hundreds of men — many Iranian and Iraqi boat arrivals — wait to hear if their asylum claims have been successful.

He is known to have spent much of his time in the Calais area in 2018 and 2019. ‘He was always here,’ an Iranian migrant told us. ‘He was next step down from chief of the entire operation run by Iranian Kurds out of Berlin, Paris, Brussels and England.

‘They bring migrants to Calais in batches. Once one group has left in a boat, the next arrives to wait.

‘The gangs are dangerous, with knives and guns. We don’t cross them — we do as they tell us.’

Even this week, with most of the world’s international travel channels floundering, the trafficking gangs continued to flourish. Indeed, the Home Office says 34 people smugglers have been convicted in British courts recently for facilitating illegal migration into the UK, by boat or plane, or in cars and lorries.

On Wednesday alone, a record-breaking 416 migrants made it across the Channel in 30 boats, eight of which evaded detection by both the French and British authorities. On the Kent shore, some of the men, women and children in these eight craft attempted to run from the beach to avoid Border Force officials and risk deportation.

Meanwhile, the scale of this escalating emergency was further revealed in new reports from the French Navy’s own operations, which show the enormous number of migrant boats being stopped as they leave from Calais and nearby beaches each day.

And in one near-miss incident on Thursday at 7.15am, P&O’s Pride of Kent ferry, sailing back to Dover, alerted the French authorities to seven migrants in difficulties in a small boat. They were rescued and returned to Calais.

The day before had seen an even bigger rescue operation. Eight boats, including a kayak, canoe, inflatable, a pleasure boat and a sailing dinghy only suitable for children under 15, had set off from the French coast.

The French rescued 53 migrants from the unsuitable craft and brought them back into Calais, Dunkirk and Boulogne ports throughout the day.

Yet this was only the tip of the iceberg. Former Royal Marine Dan O’Mahoney, the new Clandestine Channel Threat Commander appointed by Home Secretary Priti Patel to combat the crossings, this week told a House of Commons committee that a total of 200 boats were stopped by the French on Wednesday alone.

But what of the migrants when they arrive here, to the land of milk and honey they’ve been promised by the traffickers?

The truth is that eight in ten are refused asylum, according to Home Office chiefs this week. Under what are called Dublin regulations ratified by the EU, they should be returned to the country in Europe where they originally set foot and claimed asylum.

Yet only 185 of the thousands who have arrived by sea since October 2018 have been removed.

And we have learned that, after being deported, some simply return to Calais and try again on another boat for a second, or even a third, time.

Meanwhile, on this side of the Channel, the political fall-out is getting louder as the public demands tighter border controls and more deportations.

The Government blames the trafficking gangs, for very few migrants arrive in boats without the help of a people smuggler.

Most pay thousands of pounds for a seat on the illegal craft — money found by their relatives back home and transferred to the smugglers’ bank accounts.

Yet many of them soon discover this money doesn’t guarantee a permanent stay in Britain.

On Thursday, 11 Syrian migrants — believed to have been smuggled on boats from France — were returned to Madrid.

Their Home Office deportation flight was finally sanctioned after a judge dismissed ‘a large number of legal challenges’ from their lawyers at a hearing, conducted by Zoom, that went on until 2am, a few hours before the flight was due to leave.

Once in Madrid, the migrants, aged 18 to 45, said they had been ‘abandoned’ outside the Spanish capital’s airport and were left to sit in temperatures of 32c. They complained to The Guardian newspaper that they had no identity documents and were getting no help from the Spaniards.

Nine days ago, the Home Office was forced to abandon another deportation flight returning 23 migrants to Spain after human rights’ lawyers mounted myriad last-minute legal claims. They were considered by a judge from their home because there was insufficient time to organise an emergency live hearing in a courtroom. 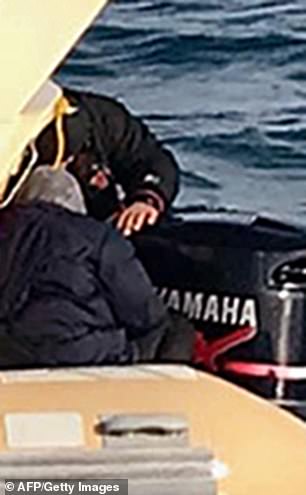 Three legal firms with an army of immigration lawyers successfully argued that some of the migrants were victims of trafficking and, therefore, could not be deported. This is a loophole that can delay failed asylum-seekers’ deportation for months and even years.

Under laws agreed with the EU, the potential trafficking victims must be placed in safe houses, often run by the Salvation Army on a multi-million-pound annual contract from the Government.

They are given enhanced weekly allowances, £20 above the £37 rate of an ordinary asylum-seeker, while being offered medical help, mental health support and access to free education services.

Toufique Hossain, director of immigration at Duncan Lewis, one of the three law firms mounting the anti-deportation challenge for some of the 23 on that cancelled flight, said: ‘If there are potential grounds for someone to be a victim of trafficking, the UK has to investigate it.’

Meanwhile, the Mail understands that failed asylum-seekers have been told by lawyers using the trafficking loophole to stay here, although they admit they struggle to collect concrete evidence to support their claims.

Two Iraqi boat arrivals now live in a safe house in the East of England. The duo told the Mail: ‘We had our asylum cases rejected twice. We turned to our lawyers for help. We were expecting deportation. They said we should say we had been trafficked on the way to your country. It would delay us being thrown out. We filled in the forms with their help and an interpreter was provided.’

One of the men, aged 29, added: ‘I am having trouble getting evidence that I was trafficked. I have sent messages to friends I made on my journey hoping they will come up with ideas to help. Yet I can stay in a safe house with food and a bed.

‘I am told it may take until the end of 2021 for a decision on whether I stay or leave.’

The smuggling gangs, of course, tell the migrants nothing of the reality of life in Britain as they send them off on boats and wait for the ‘ticket’ fee of thousands of pounds a seat to drop into their bank accounts.

As Britain’s anti-Channel boat supremo Mr O’Mahoney told the Commons committee this week: ‘We hear a lot of stories about migrants literally forced on to boats, who have no idea where they are when they get to the UK.’

No doubt some of these unfortunates will have been duped by the likes of Black Jacket and Mr Big, who have little to lose but a lot to gain as they — along with other traffickers on the French coast — continue to go about their evil work.