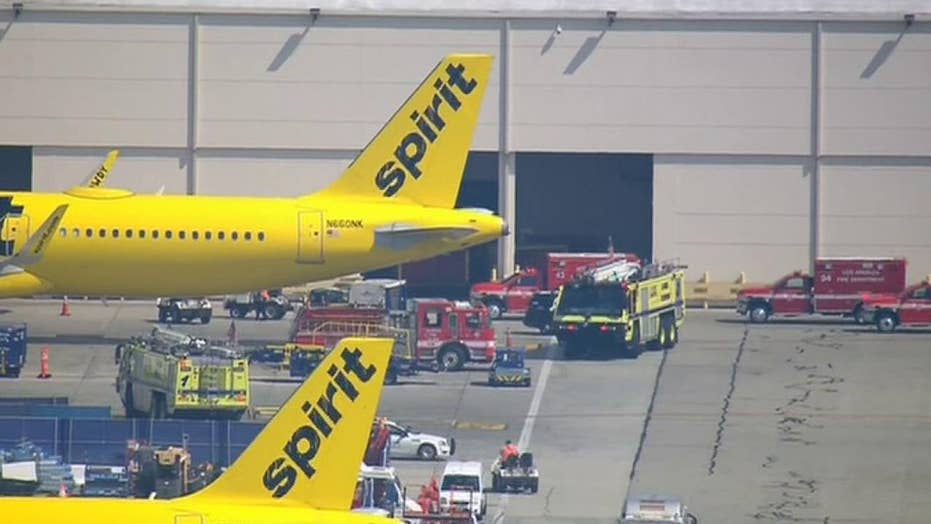 Raw video: First responders arrive at the scene of emergency landing at LAX

Fire trucks and ambulances surround a Spirit Airlines plane as it returns to the tarmac due to mechanical issues and heavy fumes.

One person was sent to the hospital after a Spirit Airlines flight headed to Denver was forced to land Friday amid complaints of "fumes in the cockpit and cabin,” officials said.

An Airbus 321, which took off from Los Angeles International Airport just after 8:30 a.m., was forced to land about 9:50 a.m. after crew members reported a strange smell “in the cockpit and cabin,” a Federal Aviation Administration (FAA) official told Fox News in an email.

The Los Angeles Fire Department responded to the scene and reported that after the strange “odor” was detected, oxygen masks were deployed as a precaution.

However, a spokesperson for the airline disputed this detail in an email to Fox News, saying that the oxygen masks were not deployed.

Fire personnel evaluated the passengers and according to Spirit, one person was sent to the hospital for further evaluation.

The FAA and the LAFD are investigating the incident but have yet to find the source or substance of the odor.

A spokesperson for the airline said that the plane was “taken out of service while our maintenance team inspects it.” A check of the flight number showed that flight later took off after 1:00 p.m. and was on its way to the original destination in Denver.

Just last month another Spirit flight headed for Florida was grounded in Maryland after an “unknown odor” in the cabin was detected. All seven crew members were taken to the hospital for evaluation.

Police could arrest travellers and seize caravans on illegal camps