This is the pigeon that triggered a speed camera when it was clocked flying at nearly 30 mph in a low-speed zone.

Now German cops have jokingly issued the bird with a fine.

The speedy bird was caught in Bocholt, a city in the Western German state of North Rhine-Westphalia. 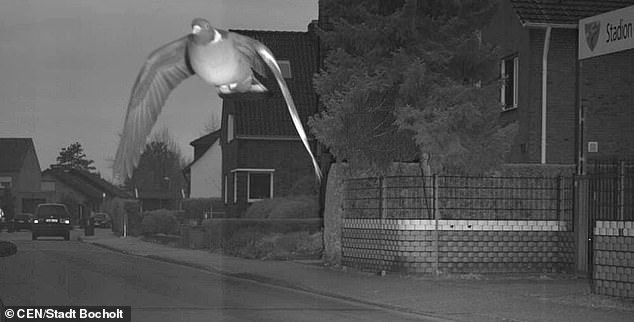 This pigeon was caught by a speed camera in the western German city of Bocholt, flying at 45 kph in a 30-kph zone

According to the Bocholt city authorities, the pigeon was flying at a speed of 45 kph (28 mph) on a street where only 30 kph (18.6 mph) is allowed.

The bird was caught on film in February, but the picture has only been shared now by the city authorities after police worked out what had triggered the speed camera.

But Bocholt city authorities let the bird off the hook and will not oblige it to pay up.

A city spokesman said: ‘Whether the speedy bird wants to pay the €25 fine, and above all how, remains an open question.

‘However, the city authorities do not want to launch a survey of possible witnesses.’

But the antisocial avian was hardly breaking a sweat, according to Britian’s Pigeon Control Resource Centre. 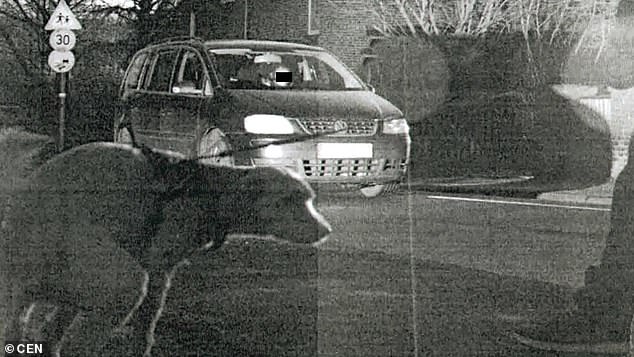 The Bocholt pigeon is not the first ever bird to be caught on a speed camera.

Last year, a speed camera in Koeniz, a town in the Swiss Canton of Bern, captured a duck flying 13 mph over the limit.

A municipal spokesman joked: ‘It is unclear where the fine should be sent.’

In Switzerland, drivers breaking the speed limit by that margin face criminal charges

Last year a speed camera in Moers, in the same German state as Bocholt, somehow managed to capture a dog depositing its mess in the pavement while out for a walk instead of the speeding car behind it.

A police spokesman said: ‘Whether the heap was cleaned up is not known to us,’ but didn’t say if they got a clean view of the car’s licence plate.