The combination would send goosebumps down the spine of every cricket fan: the trumpets of the Wide World of Sports theme song followed by the sharp commentary and charming prose of Richie Benaud. 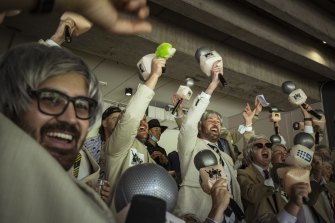 As England edged their way back into the Test on day two, each of the 50-strong troupe was equipped with a Benaud ballad book of classics such as Waltzing Matilda.

Once the lunch break arrived, it was on: three Richies with trumpets launched into the theme song before one of the group offered his insights on the sideline, blow-up microphone in hand.

The Richies tradition has grown to take place on day two of every Test across the country since starting at the Sydney Cricket Ground about 13 years ago.

Mario L’Estrange has attended the Melbourne Test as a Richie for the past 10 years. 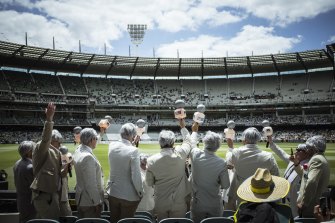 “I’ve seen it progress from a, let’s say, backyard kind of operation to now a streamlined, fully fledged support base,” he said.

Despite the booming echo of the trumpets, Mr L’Estrange said numbers were slightly down this year due to coronavirus travel restrictions.

Not to worry: “What we lost in numbers we make up for in bravado.”

Membership to the Richies is essentially open to all, depending on one crucial factor. 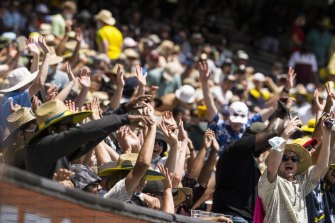 The first Mexican wave broke out just after midday on a sunny Monday at the MCG.Credit:Chris Hopkins

“It’s the love of cricket and the love of just coming out, cheering on the Aussies and getting amongst it.”

One suspects the other key criteria is not being one of the England fans, most of whom were situated about 200 metres from the Richies.

Sophie McKenna arrived at the MCG in a sparkly Union Jack dress, flanked by Michael Flaherty and Tom Stephenson in their country’s unofficial uniform – the English football team kit.

Like many of the Barmy Army this year, all three met and live locally but hail from a golden roll of northern towns: Ms McKenna from Newcastle, Mr Flaherty from Middlesbrough and Mr Stephenson from Hull.

Speaking before the start of play, Mr Stephenson was hopeful England could build some momentum if they took the quick wicket of night watchman Nathan Lyon. 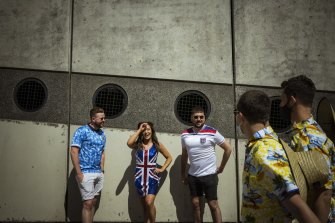 They did, shortly followed by the scalp of world No.1 batsman Marnus Labuschagne for one run.

To make it even more special, Labuschagne was dismissed by Mark Wood – the sole Geordie in the team, and therefore Ms McKenna’s favourite player.

By the time The Age saw the trio in the Barmy Army in the lunch break, they were buzzing over what they saw as England’s best session of the Ashes as they took the wickets of Labuschagne and Smith.

“I think with England fans, they always bring the passion and the atmosphere,” Ms McKenna said over the sound of the Barmy Army’s trumpeter. 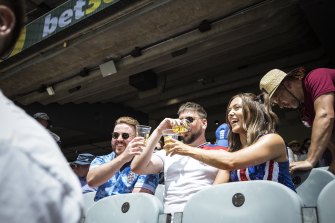 And the trio enjoying an encouraging English fightback in the afternoon.Credit:Chris Hopkins

“So even as a small group, we’re showing up in good voice again today.“

In the view of police, some fans showed too much passion: several English and Australian fans were escorted from the ground over the day for standing up and finishing their drinks.

With the start of play delayed for 30 minutes until 11am as both teams dealt with a COVID-19 outbreak in the England camp, lines outside the stadium were temporarily lengthened by Ticketek’s mobile tickets failing to download.

It was soon resolved by fans being able to show their purchase confirmation email to enter the stadium.

Among those were the Narayan family.

If some call the MCG the Mecca of cricket, they made a pilgrimage longer than most.

The quartet flew into Melbourne from Singapore two days before Christmas. Today marks their first day at the Boxing Day Test – something 17-year-old Prithvi said was a dream for years. 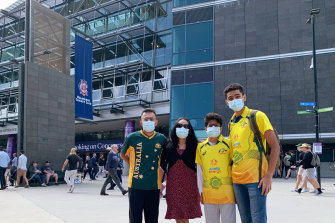 The Narayan family flew from Singapore to attend the Boxing Day test.Credit:Michael Fowler

“The MCG is the best stadium in the world. We’ve watched it every year on TV, it almost doesn’t feel real to be here,” he said outside the stadium, donning a freshly bought Australia kit.

Prithvi plays for Singapore’s national team in a junior age group, while his father Kieran was born in India and grew up a cricket tragic.

“Since childhood, I used to wake up at five in the morning to actually watch the game,” Kieran said.

“We love the grounds, and just the whole vibe right? We feel that a dream has come true.”

Alan Davies accuses the BBC of encouraging comedians to self-censor