Home » World News » Several dead, many injured, after a train derails in Germany

Berlin: A train accident in the Alps in southern Germany has left at least four people dead and many more injured, authorities said.

Police said the regional train headed for Munich appeared to have derailed shortly after Friday midday (Germany time) in Burgrain – just outside the resort town of Garmisch-Partenkirchen, from where it had set off. Three of the double-deck carriages overturned at least partly, and people were pulled out of the windows to safety. 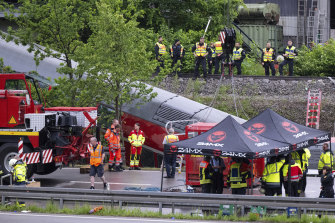 Several people have been killed and at least 16 severely injured after a regional train derailed in southern Germany.Credit:Uwe Lein/dpa via AP

Police said on Twitter that four people were killed. They put the number of injured at about 30, 15 of whom were seriously injured and taken to hospitals.

The cause of the derailment was still being investigated. About 140 people were on the train at the time, including numerous students heading home from school for the Whitsun holiday. 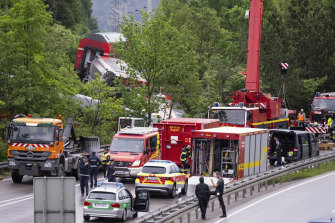 Emergency and rescue forces work on the site of a train crash.Credit:Sven Hoppe/dpa via AP

“Everything is being done to help those who were injured, to whom we wish a speedy recovery,” Scholz said. “Our thoughts are with the relatives.”

Soeder said that students on the train had been looking forward to the holidays.

“Lots of respect and thanks to the rescue services for their swift help,” he tweeted.

The line between Garmisch-Partenkirchen and Oberau, north of the accident site, was closed. The area is near the Austrian border. 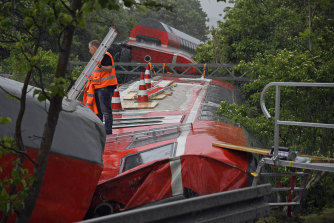 Train travel is popular among commuters and tourists alike in Germany, which has a dense network of local and long-distance trains.

While accidents are rare compared to road travel, there have been several fatal rail incidents in recent years.

A train dispatcher was sentenced to 3.5 years in prison over a 2016 crash that killed 12 people in Bad Aibling, about 80 kilometres north-east of Garmisch-Partenkirchen. The dispatcher admitted playing a game on his phone shortly before two trains collided on a single-track line.

Earlier this year one man died after the driver of a commuter train south of Munich ran a stop signal, resulting in a collision with another train.