The north south weather divide! Scotland and Northern Ireland are soaked as heavy rain and 50mph winds lead to flash floods while London basks in the sunshine and 73F highs

With the school summer holidays soon ending, families will be hoping for a final weekend of weather to match the season.

But the conditions in Britain will depend very much on where you are this weekend, with Scotland and Northern Ireland facing up to 4in (100mm) of rain and 50mph winds – while South East England enjoys 73F (23C) sunshine.

Flash flooding affected commuters in Glasgow this morning as forecasters issued a warning for further heavy rain from lunchtime today until tomorrow afternoon amid fears over spray on the roads and travel disruption. 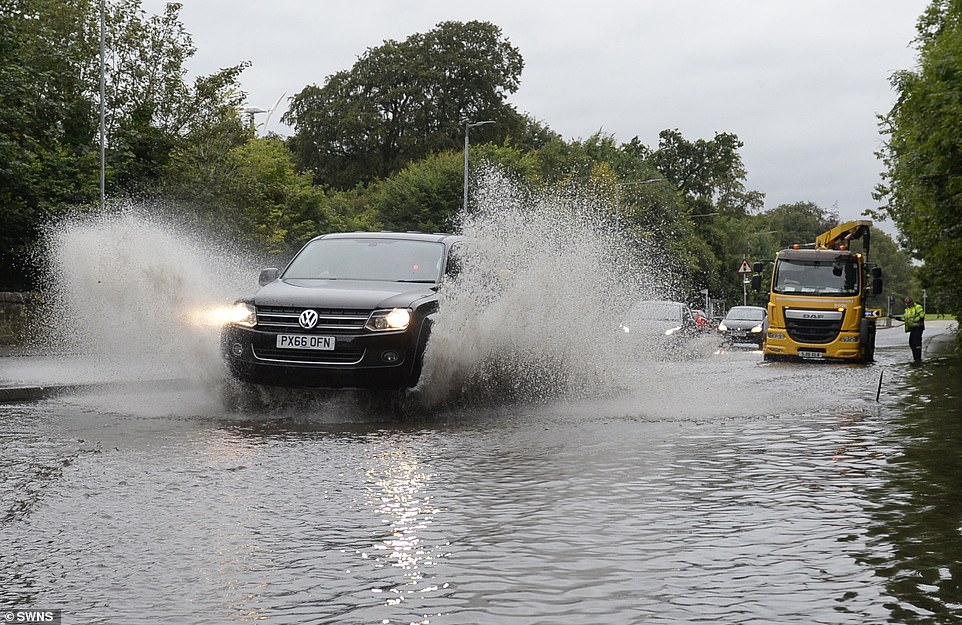 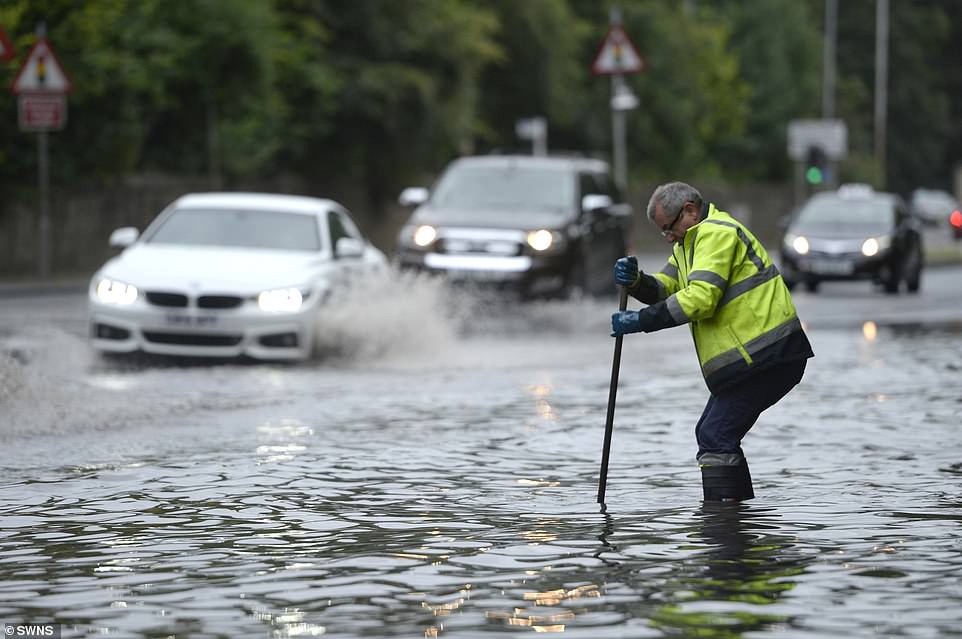 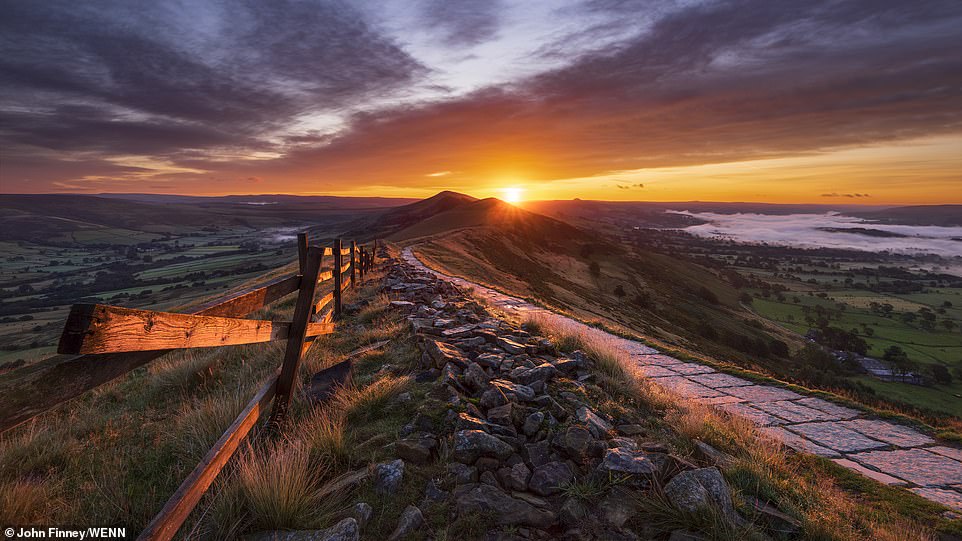 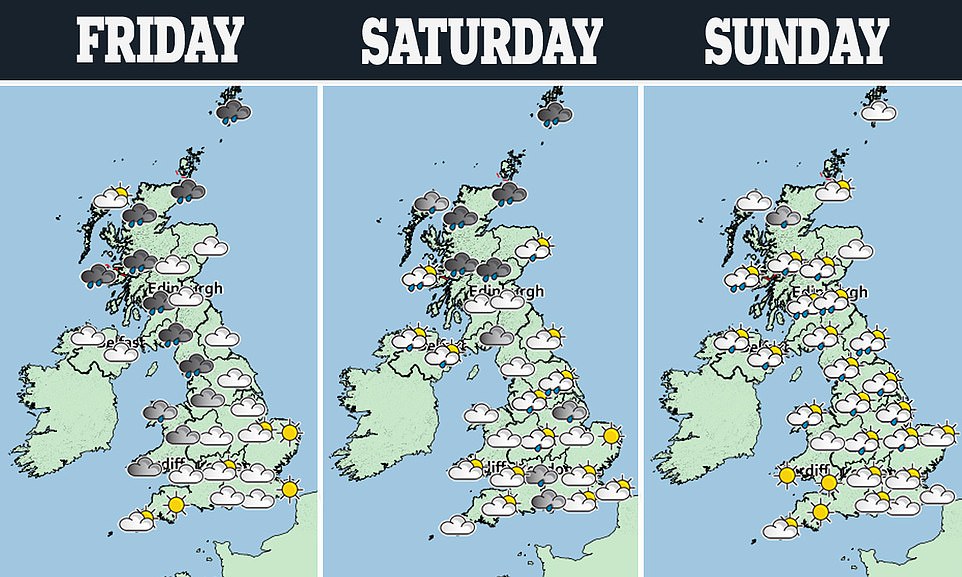 The Met Office said 1.6in (40mm) of rain is expected widely in Scotland, with 3.1in (80mm) possible over higher ground and 4in (100m) across the western hills. Experts also expect wind gusts of up to 50mph in coastal areas.

A similar warning is in place for Northern Ireland from this evening until tomorrow warning, with up to 1.2in (30mm) expected widely as well as isolated accumulations of up to 2in (50mm) across western and northern hills.

This evening will be cloudy with rain in Scotland, Northern Ireland and the far North of England, along with a few showers in North Wales and North West England, but it will be dry for South Wales, central and southern England.

Tomorrow morning will be mostly cloudy with outbreaks of rain in Scotland, Northern Ireland and western England and Wales, although central and eastern England will enjoy dry weather with sunny spells and 73F (23C) highs. 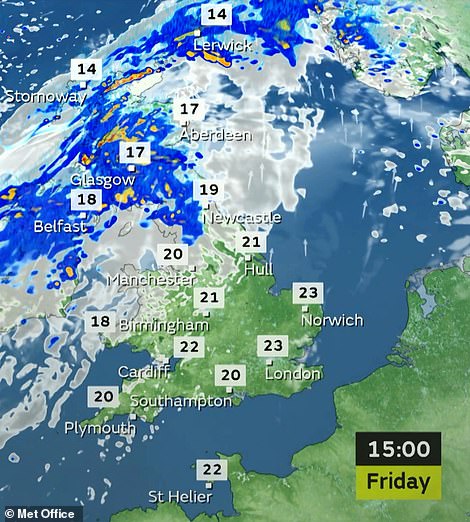 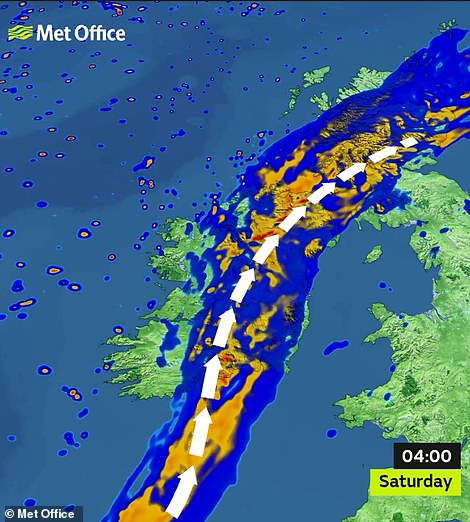 Rainfall is expected in much of Scotland today (left), with the direction of the arriving downpours also pictured (right) 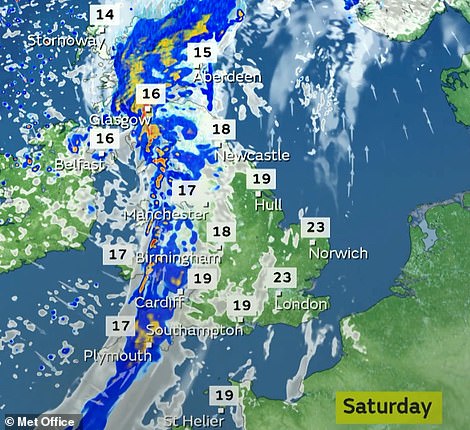 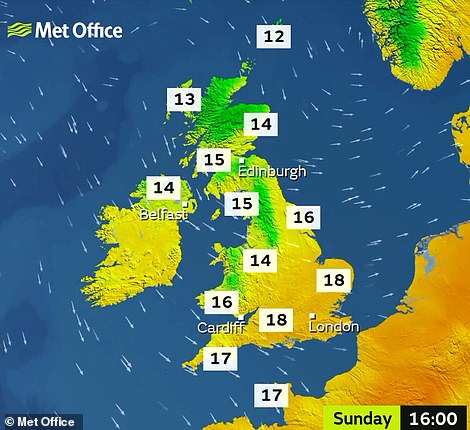 The start of next week is expected to be mostly fine and dry with sunny spells, especially in England and Wales, with highs of around 70F (21C) in the South East – although it will be cloudy and wet in North West Scotland.

The Met Office said that even before today, Scotland has endured 144 per cent of the rainfall it would expect in a normal August. About 6.6in fell from the first to the 27th of the month.

It comes less than a week the hottest ever August Bank Holiday weekend was recorded with 91.9F (33.3C) observed in London on Sunday – and the warmest Monday of the three-day break on record at 91.8F (33.2C).

‘Into the tunnel’: How Boris secured his Brexit deal