The Islamic College of Melbourne is a school in demand.

Just 10 years old, it is already the largest non-government school in Tarneit with about 1500 students, and plans to open a new primary campus to accommodate its burgeoning enrolments. 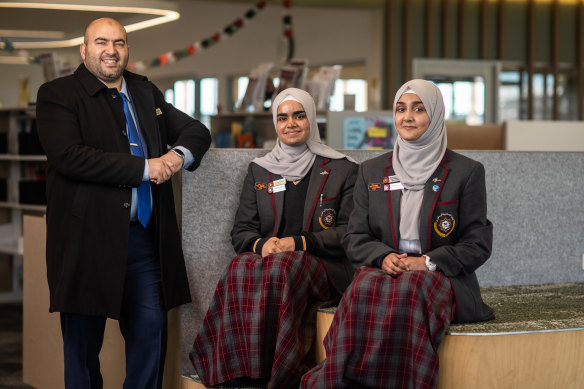 Families from as far afield as Craigieburn, an hour’s drive away in Melbourne’s north, have begun sending their children to the low-fee school on the city’s south-western fringe, which is noteworthy given the wide choice of Islamic schools in Melbourne’s western and northern suburbs.

College principal Dr Abdul Kamareddine says its appeal lies in its three educational “pillars”, all of which are given equal weight in a quest to develop well-rounded young people.

“We are an academic school, that is our first pillar,” he says. “Our second pillar is faith; in addition to being successful, we want our students to be proud Australian Muslims and not lose their identity.”

The school’s third pillar is behaviour and wellbeing. Student actions are governed by a carrot-and-stick system of bonus and demerit points, with prizes for good behaviour and consequences for bad.

Certainly on the academic front, the approach is bearing fruit.

VCE results have been on an uninterrupted trajectory of improvement in the four years since the school’s first cohort of year 12 students graduated, from a median study score of 26 in 2018, to 31 last year, putting the college in above-average territory statewide.

The proportion of students with individual study scores of 40 or more also rose to its highest ever level last year, at 5.9 per cent, leading The Age to award the Islamic College of Melbourne its Schools that Excel winner among non-government schools in Melbourne’s west.

You can view the full list of winning schools, and explore the data for your high school using this year’s Schools that Excel dashboard:

The college has also begun to offer the International Baccalaureate in years 11 and 12, and about a third of senior students select this pathway.

Kamareddine said the addition of the IB was intended to foster a global perspective among students.

“We want them to be aware that today’s issues are interconnected, that the war in Ukraine would have an impact on how much you pay for groceries in Australia.”

Year 11 students Sumaiyya Baloch and Rahemah Danish took that sentiment on board when completing the VCE unit Extended Investigation.

Sumaiyya studied the effects of climate change on onion growth, and Rahemah took a deep dive into the media’s representations of African Australians.