Sajid Javid has celebrated his freedom from quarantine after beating Covid-19 with a night out with his wife Laura at one of Mayfair’s most exclusive private clubs.

The new Health Secretary and Mrs Javid both wore masks to match  at they were spotted leaving Oswald’s on Albemarle Street in central London last night.

Its bar and restaurant is beloved by his Mr Javid’s mentor George Osborne as well as David Beckham, Amber Heard and the Queen’s nephew the Earl of Snowden who can dine and drink while enjoying complete privacy.

Its policy on face masks is not known, although it has remained open during much of the pandemic, but Mr Javid, a millionaire banker turned MP, has repeatedly said he will continue to carry a face mask ‘for the foreseeable future’.

Oswald’s is owned by London’s club king Robin Birley and is a fine wine lover’s paradise, where the house Champagne is the £250-a-bottle Krug Grande Cuvée 164ème Edition which visitors can use it to wash down high-end Italian food including risotto Milanese, Josper roasted Veal T-bone and a selection of freshly made pastas. 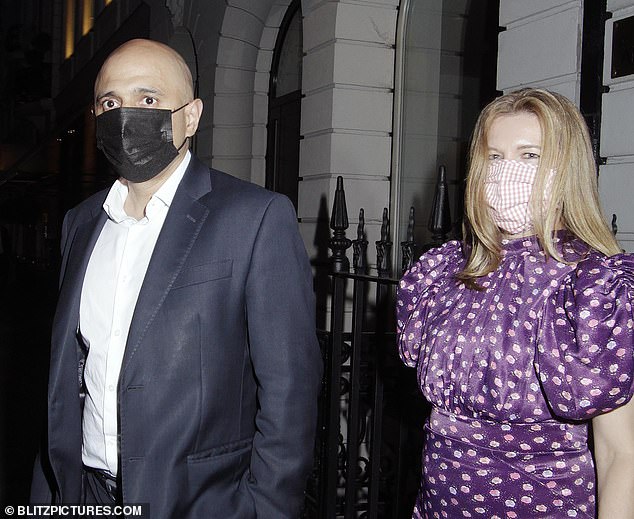 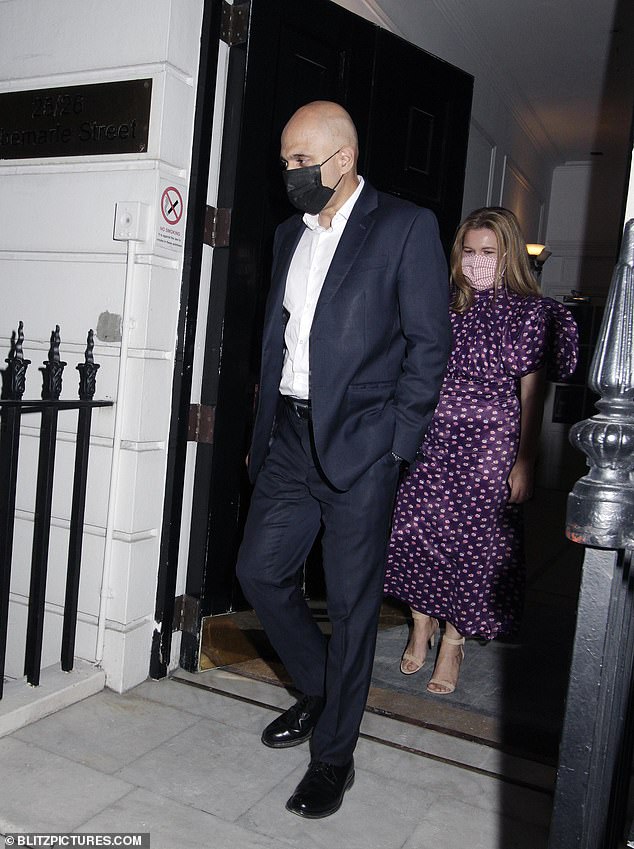 Mr Javid was taking some time away from work with his wife and childhood sweetheart Laura at the venue where members can also store their own wines to drink while there in one of its private dining rooms, a relaxed salon or on its roof terrace 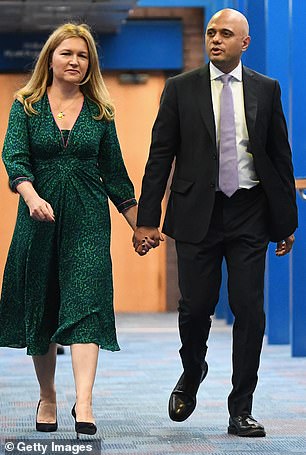 Oswald’s is named after Mr Birley’s late father Sir Oswald Hornby Joseph Birley and is famed for being so secretive it has no social media accounts and few pictures exist of its interior while people wanting to join need to be recommended by existing members and there is a waiting list.

Mr Javid was out in London having made a ‘full recovery’ from a Covid-19 infection and said his ‘symptoms were very mild, thanks to amazing vaccines’, of which he has received two doses.

And it will have been an expensive night out for the Rochdale-born MP, nicknamed ‘The Saj’

His father, Abdul Ghani-Javid, arrived in the UK in 1961 from Pakistan with a £1 note in his pocket. He worked as a bus driver before opening a shop selling clothes.

One of five brothers, Mr Javid grew up in a two-bedroom flat above the family shop in Bristol. His mother, Zubaid, spoke no English and the young Sajid would translate for her. He was told by one of his teachers that his future lay in repairing TVs, and was urged to drop maths. Mr Javid persisted with the subject, with his parents hiring a tutor. He eventually got top marks in the subject.

After studying at Exeter, he had a successful career in finance, first rising to vice-president at Chase Manhattan Bank, then Deutsche Bank, where he ran credit trading in Asia.

He married his childhood sweetheart, Laura, and the couple have four children as well as a cavapoo called Bailey. While in Downing Street, Bailey made headlines when the Prime Minister’s dog Dilyn reportedly made advances on him in the garden.

Mr Javid has been a Tory supporter since the early 1980s and attended his first party conference as a student. In 1990 he got into trouble for handing out leaflets opposing the decision to join the Exchange Rate Mechanism.

He has described George Osborne as a one-time mentor – Mr Javid joined the Government as economic secretary to the Treasury in 2012 while Mr Osborne was Chancellor. He quickly rose through the ranks to more senior roles.

In 2019 he ran for party leader before being eliminated in the fourth round. His candidacy was backed by Ruth Davidson, then Scottish Conservative leader, who described him as ‘smart, articulate and always on top of detail’.

Mr Javid resigned as Chancellor of the Exchequer in February 2020 and was replaced by the current incumbent, Rishi Sunak – who was previously Mr Javid’s deputy in the Treasury department.

Javid’s resignation came after Mr Johnson tried to sack his entire team in 2019, and amid rumours of a tumultuous relationship with Johnson’s former senior adviser Dominic Cummings, who himself resigned in November last year.

But despite their stormy relationship, Mr Javid has returned to the Prime Minister’s cabinet after over a year in the cold as an emergency replacement for Mr Hancock.

Reacting to the new appointment, Cummings claimed it was all orchestrated by the Prime Minister’s new wife Carrie Johnson, who previously worked for Javid.

‘So Carrie appoints Saj!,’ Cummings tweeted. ‘NB If I hadn’t tricked PM into firing Saj, we’d have had a [Treasury] with useless [Secretary of State]/[Special Advisors], no furlough scheme, total chaos instead of JOINT 10/11 team which was a big success.

Coronavirus is 'getting out of control again', minister admits as SAGE say new measures needed