Country principal Jo Amott freely admits she is in charge of a school that is caught in a downward spiral.

Enrolments at Balmoral K-12 Community College have fallen sharply in the past six years, from 162 students in 2015 to just 97 this year, in a pattern of decline that has begun to feed off itself. 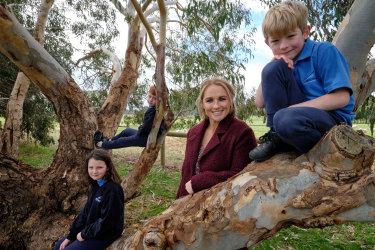 Although the school’s results have remained steady, the declining number of students has made it harder to offer some specialist subjects, or put on team sports and graduation ceremonies. This has led some students to leave, defecting to other schools in bigger towns.

Others have moved on simply because their friends have left.

“I came here three years ago and I was like, I am going to turn things around, this is going to be awesome, but I got to a point at the end of my first year where I was like, it’s just this spiral and unless I can grab 40 kids and start afresh I can’t see a circuit breaker,” Ms Amott said.

The small-town school’s problems are not unique in the west Wimmera region, which lost 14 per cent of its population in the 10 years to 2016, the most recent census found.

Since then, enrolments at government schools in the region have declined at an even faster rate: down by 40 per cent at Balmoral, by 22 per cent at Edenhope College and by 34 per cent at Goroke P-12 College.

The shared problem has led the schools to commit to something they have never done before, combining forces – and funding – to try to arrest the slide.

“Too often it’s like a competition between schools trying to get each other’s numbers, but at the end of the day the schools are there for kids, not for us,” said Edenhope College assistant principal Chad Frost. “It’s like merging a footy team. It happens all the time in the bush, otherwise they die.”

But the three schools have no plan to merge.

Rather, they have committed to pool resources to hire new teachers and support staff, beginning with a mental health practitioner who will work across all three schools.

Goroke P-12 College principal Dee Kearsley said this will overcome one of the biggest problems small schools face in hiring new staff: lack of funds to offer a full-time position.

It is hoped new teachers will be hired to work across all three schools, which have agreed to align their timetables and composite year levels so specialist classes happen simultaneously, with students either being bussed to one school, or two schools joining in virtually while students at the third are taught face to face.

“We’d be able to offer things like woodwork, metalwork, automotive and LOTE [language other than English], which we haven’t as it’s really hard for us when we try to get teachers for those,” Ms Kearsley said.

The schools have also agreed to hold a combined year 12 formal later this year. Ms Amott said her school could not have held an event on its own, given its small number of VCE and VCAL students.

The three schools committed to work together at an all-staff meeting in July, which was convened by the Country Education Partnership, a non-profit organisation that works to improve education opportunities in rural and regional areas.

Executive officer Phil Brown said the west Wimmera schools were following the example of a handful of other Victorian schools seeking to find strength in collaboration, including a government and a Catholic school in Nathalia and a cluster of primary schools in Gippsland.

“The work that we are doing is about encouraging schools to come together and explore the possibilities and breaking down those often limiting barriers that some schools see as not an advantage to work together,” he said.