Hero of Lucknow gets cancelled: Road in Southall honouring Major General Havelock who died after helping to put down Indian Mutiny in 1857 is renamed after the founder of Sikhism, Guru Nanak

A London council has been hit by a backlash after renaming a road that honoured the Hero of Lucknow Sir Major General Henry Havelock after the founder of Sikhism.

A section of Havelock Road – named after the military leader who has a statue in Trafalgar Square – was officially rebranded as Guru Nanak Road in Southall, Ealing, on Monday.

The change of the new road sign has sparked a furious row, with claims the name change constitutes an erasure of Britain’s cultural heritage.

General Havelock, who has a statue in Trafalgar Square, led the British army to recapture Cawnpore in India during the siege of Lucknow in 1857.

Havelock won adulation for his violent putdown of the Indian ‘mutineers’, who were fighting to retake their homeland from the ruling British East India Company, before he died from dysentery days after the siege ended.

The removal of his name was called a ‘scary’ ‘airbrush from history’ by critics on social media.

It is the latest development in the ‘woke wars’ to remove historial figures from public places and follows the removal of statues following the Black Lives Matter protests in the UK.

About 50 per cent of the 70,000 people who live in Southall, in Ealing, west London are of Indian heritage, leading the area to be dubbed London’s ‘little India’.

A section of Havelock Road – named after Major General Sir Henry Havelock – was rebranded as Guru Nanak Road in Southall, Ealing, on Monday, sparking a row 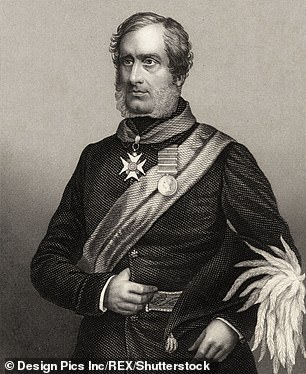 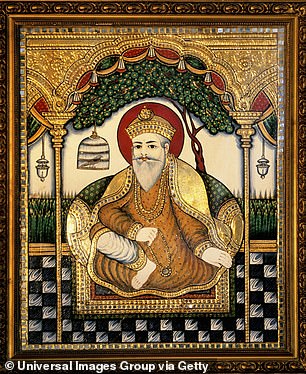 General Havelock (pictured left) led the British army to recapture Cawnpore, also spelt Kanpur, during the Indian Mutiny of 1857. His name has been replaced on the section of road, which has now been named after the founder of Sikhism, Guru Nanak (pictured right)

Henry Havelock was a British Major General who won fame for his recapture of Cawnpore during the Indian Mutiny of 1857.

The clash was sparked by an uprising of native soldiers against the ruling British East India Company.

In 1857, growing tension was inflamed by rumours that Indian soldiers’ rifle cartridges were being greased with pig and cow fat, offending Muslims and Hindus alike.

The unrest erupted in earnest in May. Delhi soon fell and there were further uprisings elsewhere.

In Lucknow, Chief Commissioner Sir Henry Lawrence fortified his home and prepared for a siege.

Mutineers attacked the Residency and its 1,700-strong garrison in May and by July Sir Henry was dead.

Garrison numbers dwindled until a relief force led by General Havelock fought its way into Lucknow in September.

Havelock won adulation for his violent putdown of the Indian ‘mutineers’, who were fighting to retake their homeland.

He died in the city from exhaustion and dysentery days after the siege ended.

His family were awarded the title of ‘baron’ after his death in recognition of his exploits at the siege of Lucknow.

The Residency was evacuated in November but was recaptured in March the following year and the uprising was crushed soon after.

The East India Company was subsequently abolished and the government of India transferred to the Crown.

But others applauded the removal of Major Havelock’s name, claiming he was a ‘oppressor’ and ‘colonial murderer’.

During the clash native soldiers fighting to retake their homeland were crushed by troops under British control.

Ealing Council announced its decision to change the road name in July to instead honour Guru Nanak.

The move was announced last year by Councillor Julian Bell, the leader of Ealing Council, who said the move was a bid to move away from ‘a frozen past’.

He said at the time: ‘We need to make sure that our public realm, our statues, road names and buildings reflect our diversity, and not a frozen past where colonialism, racism and the slave trade were present and celebrated.’

The part of Havelock Road that has been renamed includes the Guwara – a Sikh place of worship – called Sri Guru Singh Sabha Southall.

It is the largest Gurdwara organisation outside of India.

Some Sikhs living in the area expressed alarm that the road should be named after Guru Nanak.

Sabi Dhillon appeared to oppose the changes, writing: ‘I have never come across any Jesus Christ Avenue, so…’

Even the head of the Gurdwara announced it was against changing the name to Guru Nanak, saying it was offensive to the Sikh community.

He highlighted that there were no roads in the UK called ‘Jesus Christ Road’, and no others called ‘Prophet Mohammed Road’.

He said: ‘Please stop offending the Sikh community on behest of some misguided councillors.

‘I urge you to immediately stop this step and take it back.’

His sentiments were echoed by people this week as the new sign was unveiled. 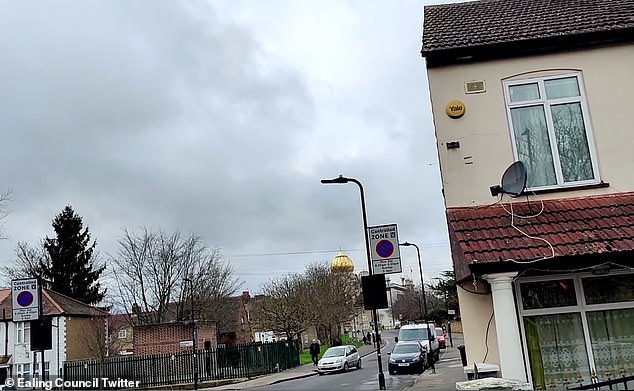 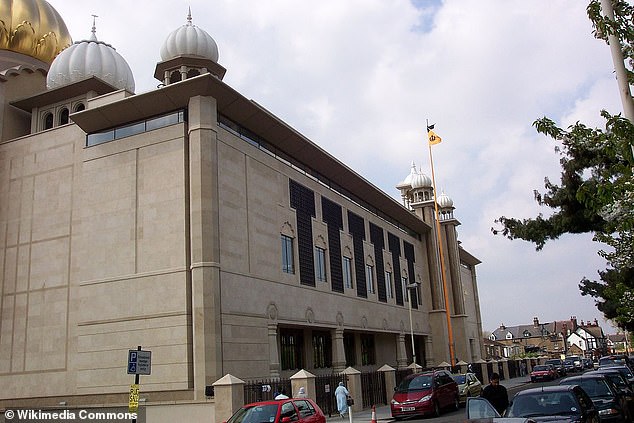 Another neighbour sarcastically quipped: ‘That’s it guys, racism/systemic issues within Southall have all been solved. Ealing Council, well done!’

While another commented on social media that the road, which they claim is rife with drug dealing, drinkers and prostitution, is unsuitable to be named after the famous guru.

Jagit Singh said: ‘This is so stupid. People drink, smoke weed, do drugs, prostitution on that road. What idiot thought that this is a good idea?’

Kam Basra added: ‘Can’t believe they did this. It is so disrespectful.

‘You will get people Sikhs or non Sikhs walking down the road smoking or having a can of beer. It’s so wrong.’

Last month, a descendent of General Havelock was trolled online and accused of having ‘white guilt’ after she endorsed the name change.

‘My ancestor’s story will always be part of British history, but his living relatives have a much different view on the world and are very happy to celebrate Sikh influences and culture in the UK.’

On Twitter, Thomas Johnson hit back at her: ‘It’s being expunged from British history you virtue signalling b***h!’ 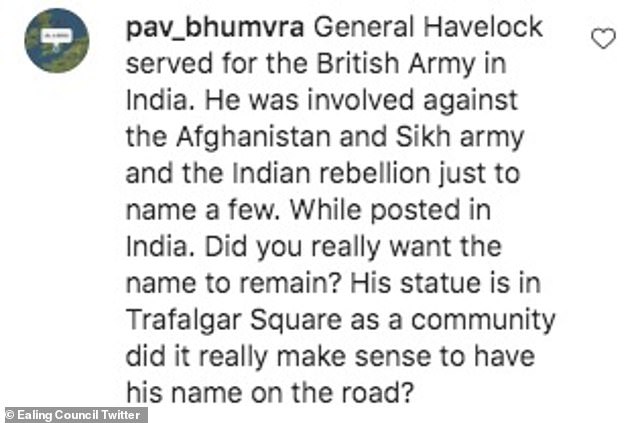 This individual highlighted the religious significance the new name has to Sikhs, and compared it to Christianity in a tongue in cheek way

Ealing Council consulted on the name changing plans with residents, businesses emergency servuces and Royal Mail, and says most neighbours were in favour of the name change.

Its says the decision to renamed was taken in accordance with its ‘street naming protocol’ which stated changes should ‘respect and balance cultural and historical identities, sensitivities, and heritage’.

Critics claim General Havelock – who also has a bust in Trafalgar Square, among other places – is intrinsically linked to colonialism and slavery and his statues have been targetted by vandals.

Some people claimed the road was an inappropriate choice for a rebrand, claiming Guru Nanak would be ‘offended’ 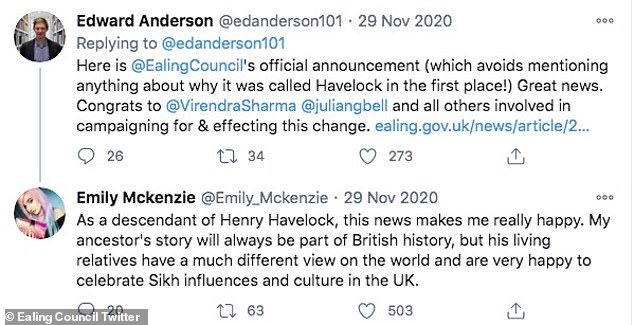 Last month, a descendent of General Havelock was trolled online and accused of having ‘white guilt’ after she endorsed the name change

Labour’s Ealing Southall MP Virendra Sharma, who has campaigned for the name change since 1992, last month said: ‘This name change is about more than just a sign coming down, Sir Henry Havelock was a colonial oppressor, he ravaged India and her people for personal gain and imperial glory.

‘To have a road named in honour of a colonial murderer in the heart of one of the UK’s most diverse areas is an insult.’

It moved to its current location in 1997 and was inaugurated by His Royal Highness, The Prince of Wales.

Super Tuesday 2020 – which states vote, when is it and why is it important? – The Sun