Even to insiders the numbers came as the biggest surprise: Twenty three incidents in which one or more non-combatants were unlawfully killed, 39 individual Afghan victims of what were effectively summary executions as distinct from "heat of battle" misjudgments. And a total of 25 current or former defence personnel as perpetrators, with 19 individuals referred to the Australian Federal Police for prospective prosecution.

When the Inspector-General of the Australian Defence Force inquiry into "rumours" began four years ago, the focus was on one SAS patrol of around six operators and two incidents. 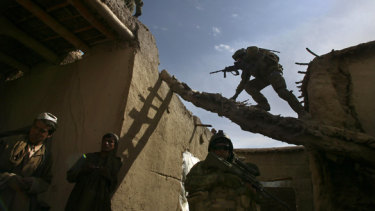 The achievement of the the inspector's small team to reach through the smoke of rumour and secure a grip on hard evidence within an environment defined by secrecy will probably never be fully appreciated.

Lieutenant-General Angus Campbell, who commissioned the inquiry, accepted all 143 recommendations in Justice Paul Brereton’s report, which exposed a "disgraceful and profound betrayal of the Australian Defence Force’s professional standards and expectations".

Even the redacted version of a report which is said to be more than 3500 pages long will take a while for the Australian public to process. The big questions of how these outrages were allowed to occur and who was responsible are extensively confronted, but there are no easy answers.

Thirty-nine thousand Australians deployed to Afghanistan. Around 3000 were Special Forces operators. The most famed and respected element, the Special Air Service Regiment (SAS) bears the bulk of responsibility for the alleged war crimes, the majority of which occurred late in a conflict when strategic purpose wavered.

A profound cultural failing of allowing "rock star" hubris to overwhelm traditional humility is sheeted home more to commanders in Australia than those deployed to Afghanistan.

"Some domestic commanders … bear significant responsibility for contributing to the environment in which war crimes were committed, most notably those who embraced or fostered the ‘warrior culture’ and empowered, or did not restrain, the clique of non-commissioned officers who propagated it."

Systemic failure is also identified with patrol commanders deliberately keeping officers at a distance from the close fight. A further problem was higher in the command chain. Australian national leadership "did not have the degree of command and control over Special Operations Task Group".

The Australian Special Operators were instead more accountable to their brethren in International Security Assistance Force Special Operations Command – principally the Americans.

The first recommendation of the IGADF report is that, "in future, so far as is practicable, Australia should retain operational command over its deployed forces, including Special Forces, rather than assigning them under command to other entities".

The crucial role of the brave souls who may well have saved their regiment by calling out ugly behaviour is not forgotten. The final recommendation is that "the careers of those serving members who have assisted in the exposure of misconduct or are known to have acted with propriety and probity, be seen to prosper". Lieutenant-General Campbell, addressing yesterday’s press conference, said the efforts of these soldiers, who have endured years of ostracism and vilification are "deeply appreciated".

It is, all in all, an extraordinary, courageous and seminal body of work. Australia is lucky to have the likes of Campbell, former Special Operations Commander Jeff Sengelman, Major General Paul Brereton and researcher, Dr Samantha Crompvoets converge to investigate these events and choose to do the right thing.

For all that, one finding of the report will be hard to swallow by the Australian public and most particularly the downtrodden digger. How is it that over six years, more than 20 grievous incidents including alleged murder occurred and between a Lieutenant and a Lieutenant General, no one knew anything about it?

General Campbell did not duck the issue of responsibility. He saw this in itself as leadership failure. It was as if, in the back roads of the collective mindset out there in the wilds of Afghanistan, warning signs went up advising commanders: "Do not go there". And they did not. Leaders, many of whom we know to be professional, responsible and ethical, have stressed the pressure they felt to keep the battle space safe and the Australian casualty count to a minimum.

The report includes a 25-page "Leadership and Ethics Review", which is insightful about the leadership fog that appeared to settle over the ramparts of Special Operations, Camp Russell. Its author, the assistant Inspector-General Professor David Whetham of Kings College London, found that "there is almost a sense of bewilderment from staff officers when presented with the evidence of what was happening on their watch".

There was also a sense that much of the supposed oversight and control from above was "characterised by an abandoned curiosity".

As the war bled on, with no clear metric for success in sight, an unwritten clause appeared to emerge that told operators if a fighting age male was found in a combat zone whether armed or not, they were likely to be engaged in hostilities. Privately, there was little faith in the detention option. Suspected insurgents were frequently released for lack of evidence, thereby posing a further threat.

Even so, there is no excuse. The laws of armed conflict are clear and well understood by our soldiers. Further, local Afghan complaints, which in the past were largely ignored, contended that many victims were guilty of simply being in the wrong place at the wrong time.

Now as one chapter ends another begins. The most common criticism levelled at the Inspector-General was it all took too long. Interviewing 510 witnesses and "eliciting truthful disclosures in the closed, closely bonded and highly compartmentalised Special Forces community, in which loyalty to one’s mates, immediate superiors and the unity are paramount, in which secrecy is at a premium, and in which those who ‘leak’ are an anathema", does take a while.

With an investigation and prosecution process anticipated to roll on for another decade, an even larger fund of public patience is now required.

Boy, 13, Pleads Guilty to Killing Teen Girl Because He Falsely Thought She Was Pregnant

Are pubs closing again and what are the current lockdown rules?