Remains discovered during a Houston-area search in December have been identified as those of Taylor Pomaski, the missing girlfriend of former NFL player Kevin Ware, authorities said Saturday.

The identification was made by the Harris County Institute of Forensic Sciences, Harris County Sheriff's Office Senior Deputy Thomas Gilliland said by email. 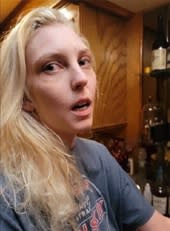 “The investigation is still open and active and homicide investigators are diligent on bringing this case to a close,” Gilliland said.

Pomaski, 29, was last seen April 25, 2021, at a party at her home in Spring, Texas, the sheriff's office said. Her disappearance was described as suspicious.

The remains were found Dec. 10 at a site in north Harris County that had been identified during the investigation, Sheriff Ed Gonzalez said at at the time.

Ware, former tight end for the San Francisco 49ers, was questioned about her disappearance in June, authorities said. The sheriff's office has not named any suspects or persons of interest.

The former player has been in Montgomery County Jail north of Houston, for 10 months, according to inmate records. His residence is in nearby Spring.

Ware was being held without bail after allegedly violating conditions of bond for a case involving drug and weapons charges unrelated to the disappearance, according to NBC affiliate KPRC of Houston.

In a June court filing that sought to have his bond revoked, Montgomery County prosecutors described the athlete as a suspect in the Pomaski case, but that designation has not been used by lead investigators on the case from Harris County.

In December, Ware’s attorney, Coby DuBose, told KPRC, “That filing is the first time that it’s been suggested that he is a suspect.”

"He’s been cooperative," the lawyer said at the time. "He’s told the police everything that he knows and he’s led them through his house."

In an email Saturday night, DuBose said authorities have not spoken to Ware or himself about Pomaski recently.

He said the former player is fighting the revocation of bond that's keeping him behind bars.

"We believe his bond was revoked in violation of the law, and our appeal of the bond issue is still pending in the Court of Appeals," DuBose said.