Home » World News » Queen Elizabeth is dead: Here are the plans for the next 10 days of mourning

LONDON — With the death of Queen Elizabeth II, who ruled for more than 70 years, the United Kingdom has been plunged into mourning and at least 10 days of solemn ceremony.

Few alive anywhere in the world will have witnessed anything like the carefully orchestrated and detailed plan, including gun salutes, bells pealing across the land and millions gathering to pay tribute. Britain is in a period of official national mourning that lasts until the queen’s funeral.

Code-named London Bridge, the plan for the queen’s funeral, which has been years in the making, will stage-manage an otherwise uncertain few weeks for the nation, from the succession to a new king to a period of national mourning, the queen’s funeral and the eventual coronation of her eldest son, King Charles III, 73, according to advance briefings with Buckingham Palace officials.

These plans may change in the days ahead.

The queen’s coffin will be moved to the ballroom at Balmoral Castle in Scotland, covered in the royal standard of Scotland and a wreath of flowers that is changed daily. The many staff members who at Balmoral and its vast estate will be able to pay their respects.

From the moment of Elizabeth’s death in Balmoral Castle, Charles officially became the monarch of the United Kingdom of Britain and Northern Ireland, as well as the head of state of Commonwealth countries such as Australia and Canada. The new king will be known as Charles III, a royal spokesperson said Thursday.

It’s a busy time for the new king, who will speak with Prime Minister Liz Truss, release a written statement and record a TV address to the nation, to be broadcast later Friday.

Such is the expected outpouring of grief that space is being allocated outside Buckingham Palace, the British monarch’s administrative headquarters, for flowers and other tributes from the public, before they are then gathered and taken to a designated floral tribute area in the adjacent Green Park. Thousands of people are expected to leave messages in books of condolences at Buckingham and St. James’s palaces, also in London, and at Windsor Castle, the family home of Britain’s kings and queens for more than 1,000 years.

Westminster Abbey’s tenor bell and Great Tom, the state bell at St. Paul’s Cathedral, will peal over London from noon for one hour. Gun salutes are also planned to be fired at Scotland’s Edinburgh Castle and Hyde Park in London, one every 10 seconds for each year of Elizabeth’s life. 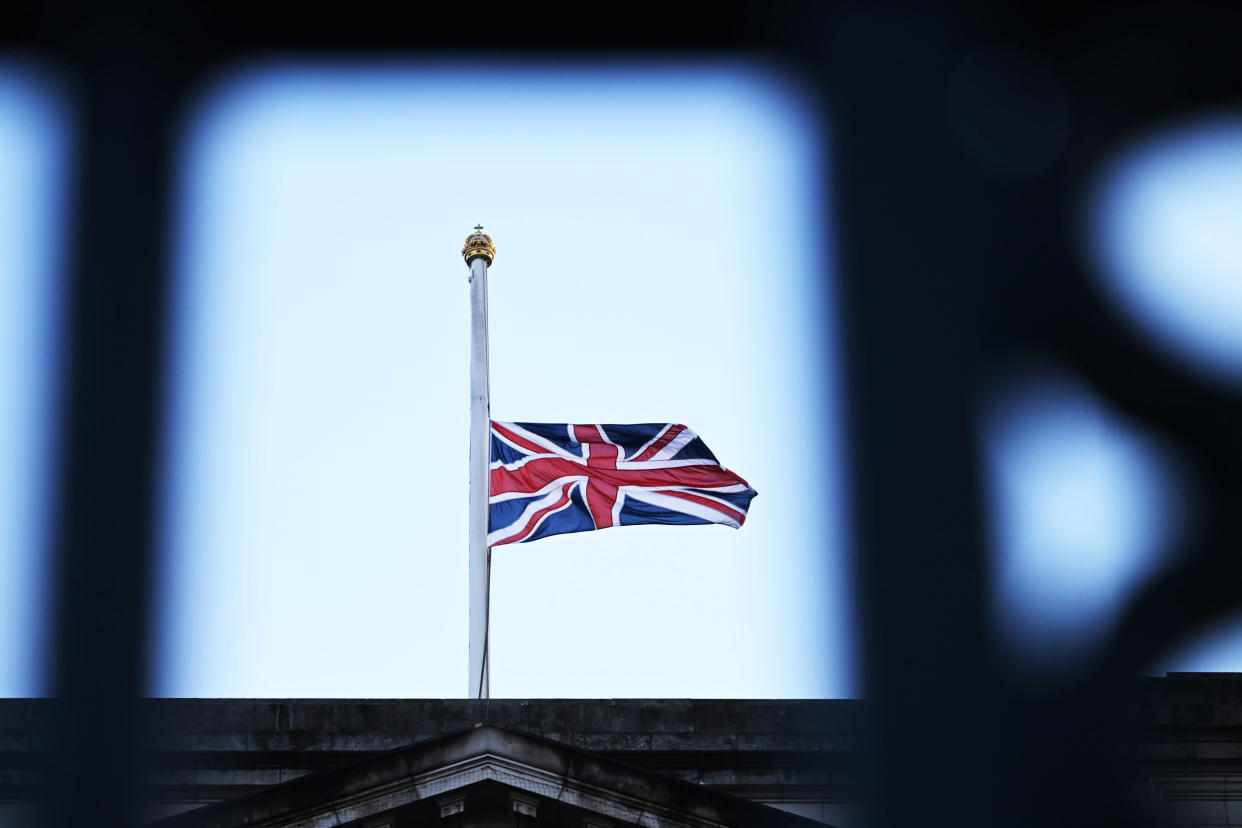 The Sebastopol bell, captured from Russian forces during the 19th century Crimean War, will also sound at Windsor Castle once a minute for every year of her life.

Flags on official buildings will fly at half-staff, while flags in London’s Parliament Square and the Mall will be dressed in black crepe and tassels. A service of thanksgiving takes place at St. Paul’s Cathedral, although the new king is not expected to be there.

The coffin will be carried from the Balmoral ballroom by a party of bearers consisting of the Balmoral estate head keep and six other keepers. The queen’s official bagpipe player, the Piper to the Sovereign, will walk ahead of the coffin as it leaves by hearse.

The queen’s body will then be moved to Holyrood, her residence in Scotland’s capital, Edinburgh, where a military guard of honor will meet it.

In London, members of the Privy Council, a committee of senior current and former politicians and judges who advise the monarch, will hear the new king say an oath and give a speech. For the first time, the meeting — a constitutional formality known as the Ascension Council — will be televised.

Also in attendance will be the Archbishop of Canterbury, the most senior clergyman in the Church of England, which the new king now heads.

The king’s proclamation will be met with a 41-gun salute at Hyde Park fired by the King’s Troop Royal Horse Artillery and a 62-gun salute at the Tower of London by the Honourable Artillery Company.

In one of many flourishes of pageantry, a ceremonial tune, or fanfare, will sound, and a Garter King of Arms, a heraldic position that has been in the royal household since 1484, will proclaim Charles the new king from a balcony of St. James’s Palace.

The royal band will then play the first verse of the national anthem — which now has a new title: “God Save the King.”

At that point, flags on public buildings can be raised to full staff.

King Charles III and the Queen Consort will go to Holyrood, where he will be met with a 21-gun salute.

Members of the royal family, including the queen’s children and grandchildren, will join a procession from Holyrood to Edinburgh’s St. Giles’ Cathedral, with the guns of Edinburgh Castle firing every minute throughout.

A service will be held at St. Giles’, where the queen’s coffin will rest for 24 hours, allowing members of the public to file past and pay their respects.

Towns and cities across the U.K. will make their own proclamations to the new king, with fanfares at Cardiff Castle, Wales; Mercat Cross, a ceremonial monument on the Royal Mile in Edinburgh; and Hillsborough Castle in Belfast, Northern Ireland.

The queen’s coffin will leave St. Giles’ Cathedral by car before it is transferred to a royal train, which will travel slowly overnight to London, sent off with a rendition of the national anthem. As the train passes into England, the Scottish standard is replaced with the royal standard.

The new king and his wife, Camilla, will hear messages of condolence in Westminster Hall, between the Houses of Parliament in Westminster, London. 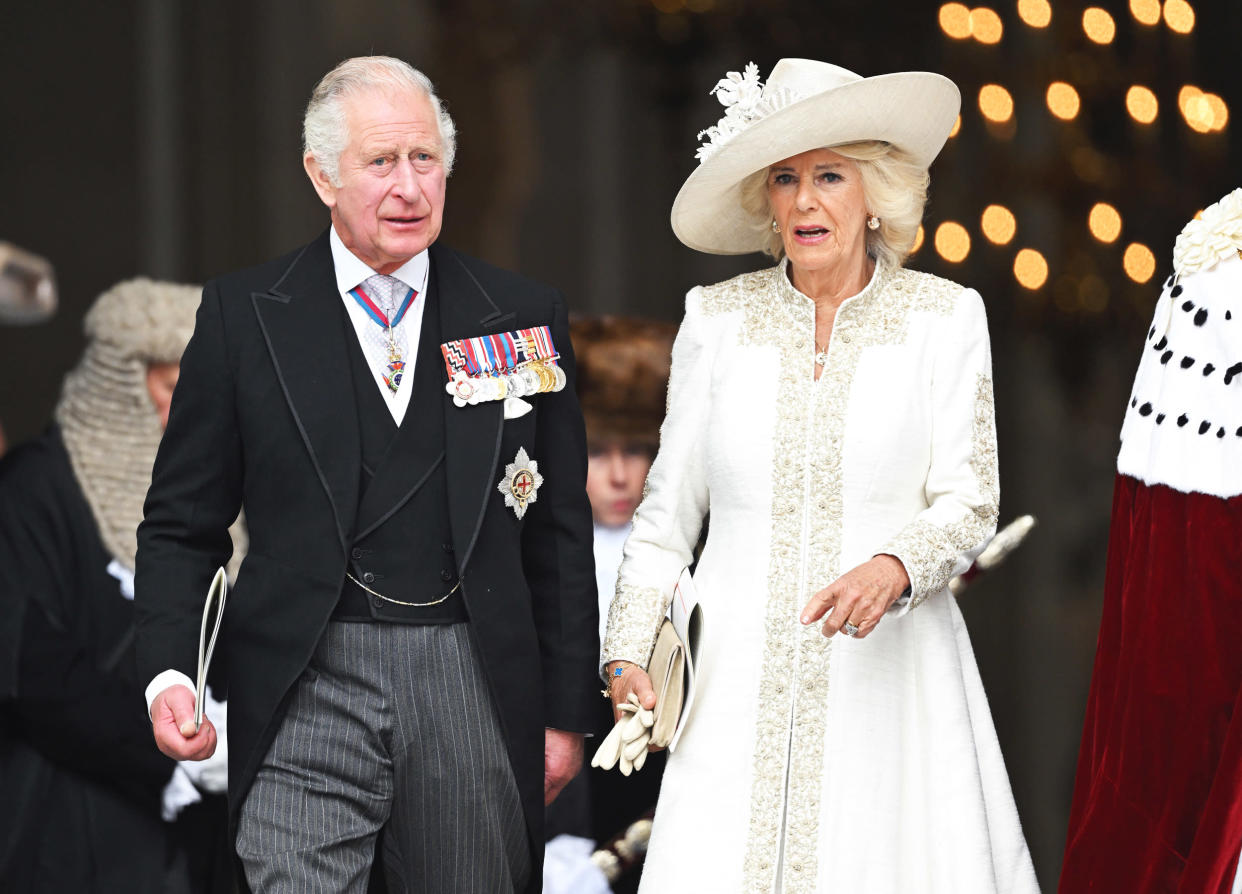 As the coffin arrives at London’s St. Pancras Station, it will be greeted by senior royals, the prime minister and other dignitaries before it is transferred to Buckingham Palace by car.

The thousands, if not millions, of people expected to line up to pay their respects to Elizabeth when her body is taken to Westminster Hall will be invited to wait in line in Victoria Tower Gardens, a small green space next to the Houses of Parliament alongside the River Thames.

Such is the importance of moving her body to this temporary resting place that there will be a full rehearsal.

Elizabeth’s body will be taken from Buckingham Palace to the Palace of Westminster in a gun carriage procession, a symbolic and momentous moment. The coffin will be draped in the royal standard, on which the Imperial State Crown will be placed on a velvet cushion, followed by the new king. Princes William and Harry, alongside Elizabeth’s other children and members of the royal family, will follow on foot.

Big Ben, the colossal bell in the Elizabeth Tower in the Houses of Parliament (the name of the tower and the bell are commonly confused), will toll at one-minute intervals for the duration of the procession, along with gun salutes in Hyde Park.

The coffin will be taken to Westminster Hall, where, after a short service, Elizabeth will lie in state under armed guard for the next five days. A continuous vigil will begin by the Yeoman of the Guard and other military personnel.

There are preparations for hundreds of thousands of people to file past and pay their respects in a 24-hour operation interrupted only by a nightly 15-minute cleaning break.

The bodies of the Queen Mother; King George VI, Elizabeth’s father; and the British wartime leader Winston Churchill all lay in state in this hall, which has played a key role in English public life since the 11th century.

On this day, world leaders begin to arrive to pay their respects at Westminster Hall. Meanwhile, the new king meets members of the royal family at Buckingham Palace.

The new king meets the prime minister at noon for his first official weekly audience, a constitutional custom in which the head of the political executive informs the head of state about parliamentary business, as dramatized in “The Crown” and many other TV and film scenes.

Not until 10 days after her death will Elizabeth be given her official send-off at Westminster Abbey, with members of her family, British establishment figures and heads of state from around the world in attendance.

During the morning, Westminster Abbey will fill up with British and foreign dignitaries, including all surviving former British prime ministers.

The final well-wishers will be admitted to Westminster Hall to pay their respects at 6:30 a.m. (1:30 a.m. ET before the coffin makes its short journey with the Imperial State Crown, the Orb and the Scepter all on it.

At 11 a.m. (6 a.m.) exactly, the pallbearers will stop at the Grave of the Unknown Warrior and Big Ben will strike just once to mark a national two-minute silence.

The Last Post, Reveille and the national anthem will end the hourlong funeral service before a procession that could be as long as 1.5 miles then carries the coffin past Buckingham Palace to Wellington Arch and on to Elizabeth’s final resting place at Windsor.