Wife Kate Middleton is self-isolating after coming into contact with someone who tested positive for Covid. 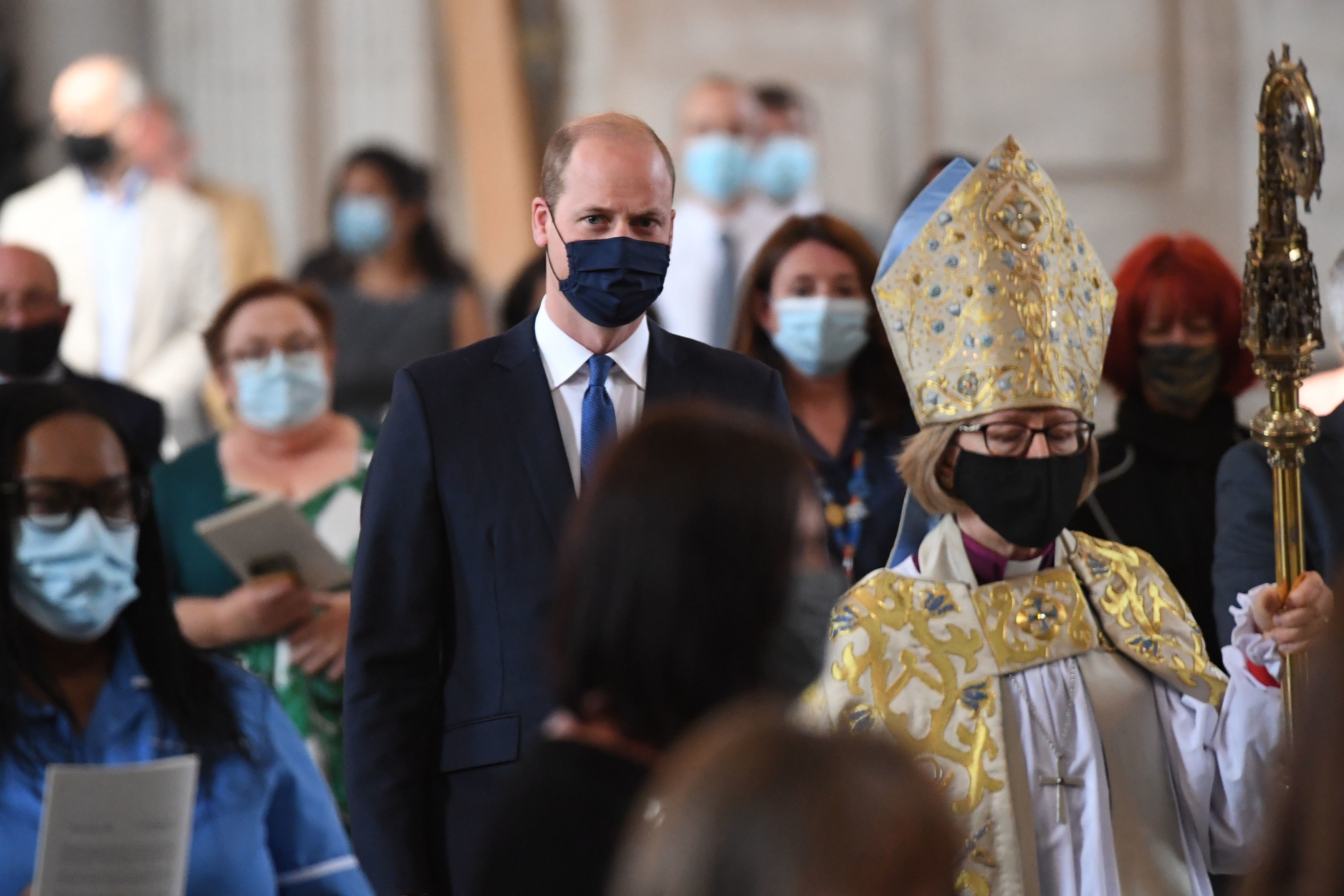 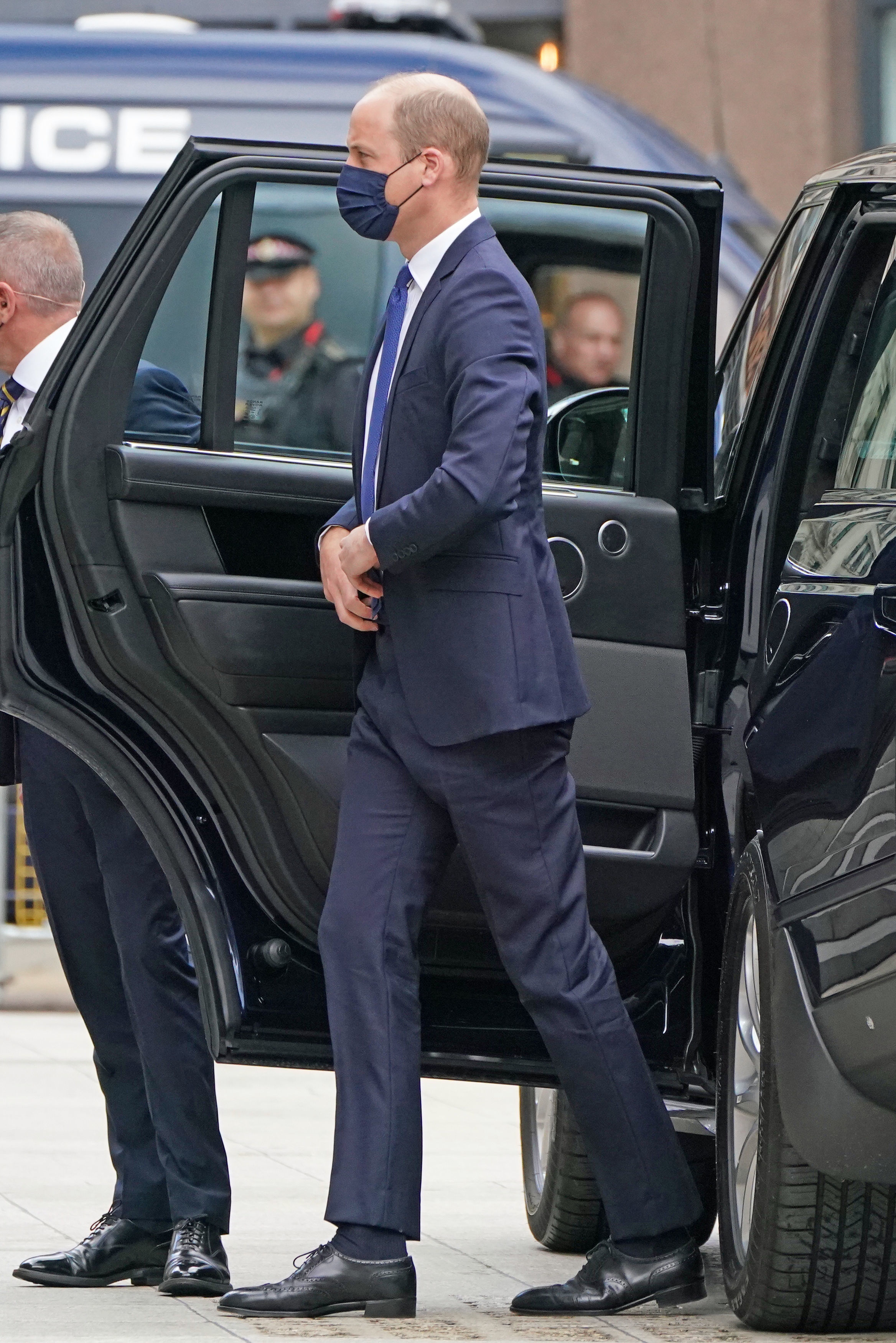 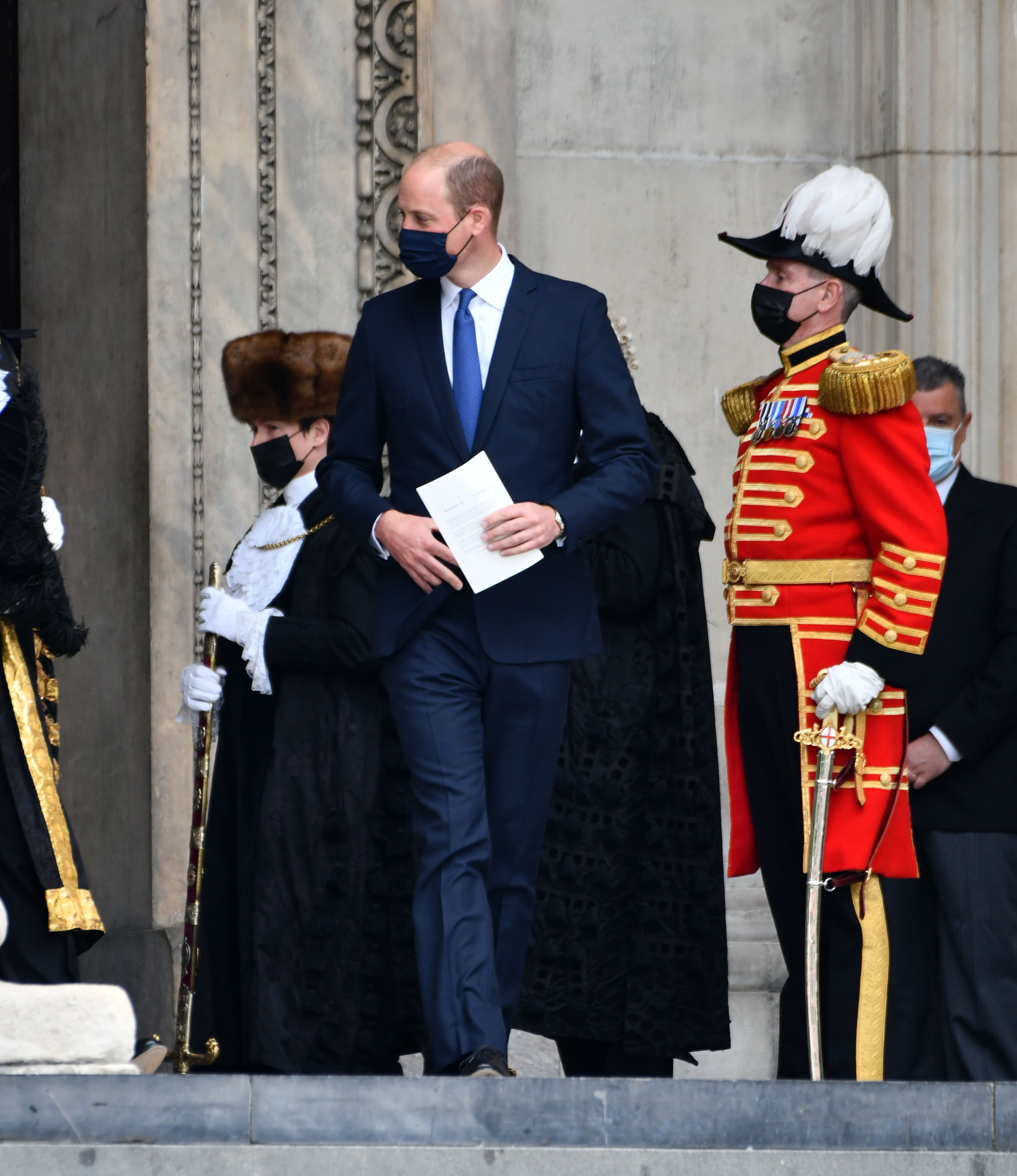 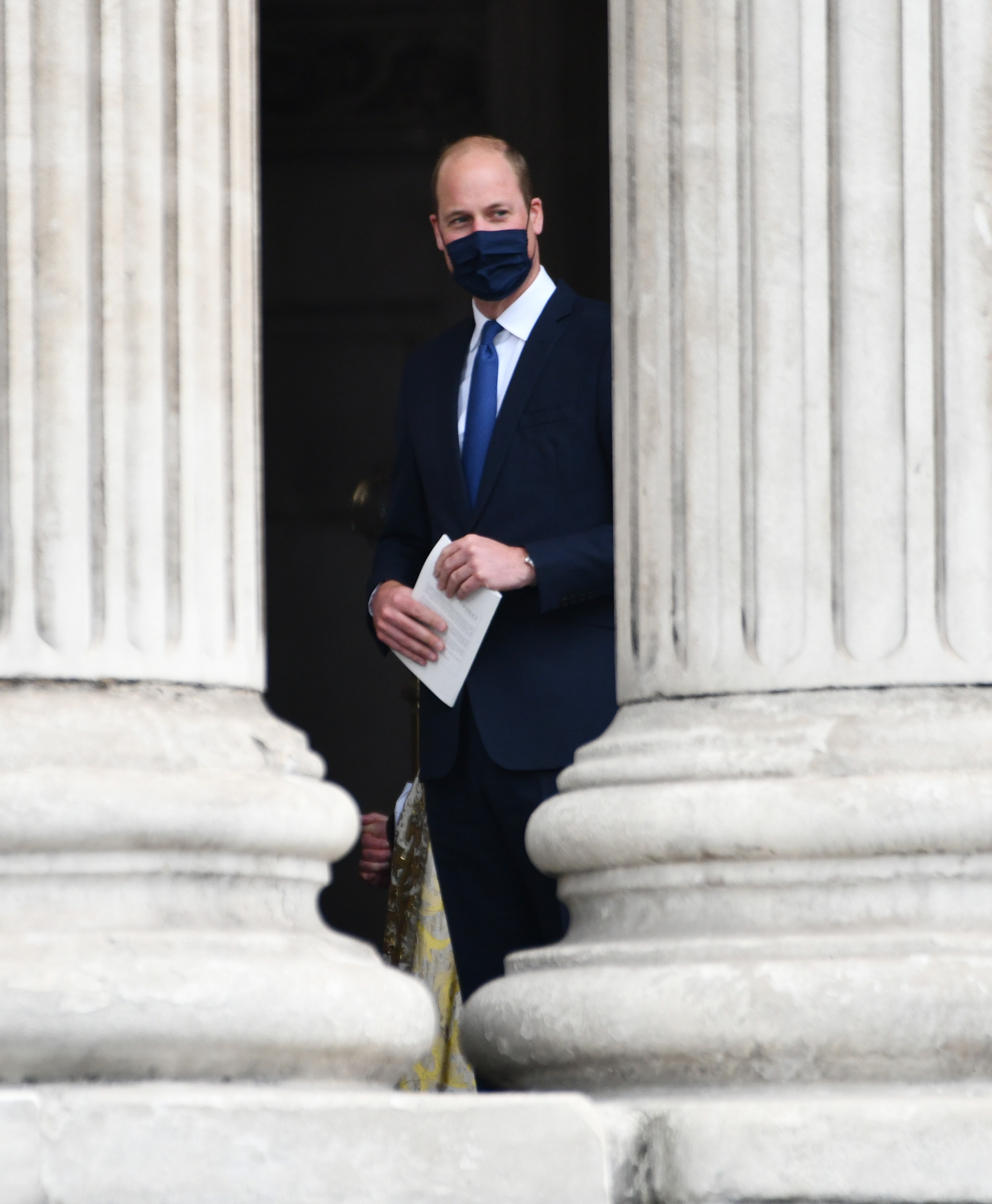 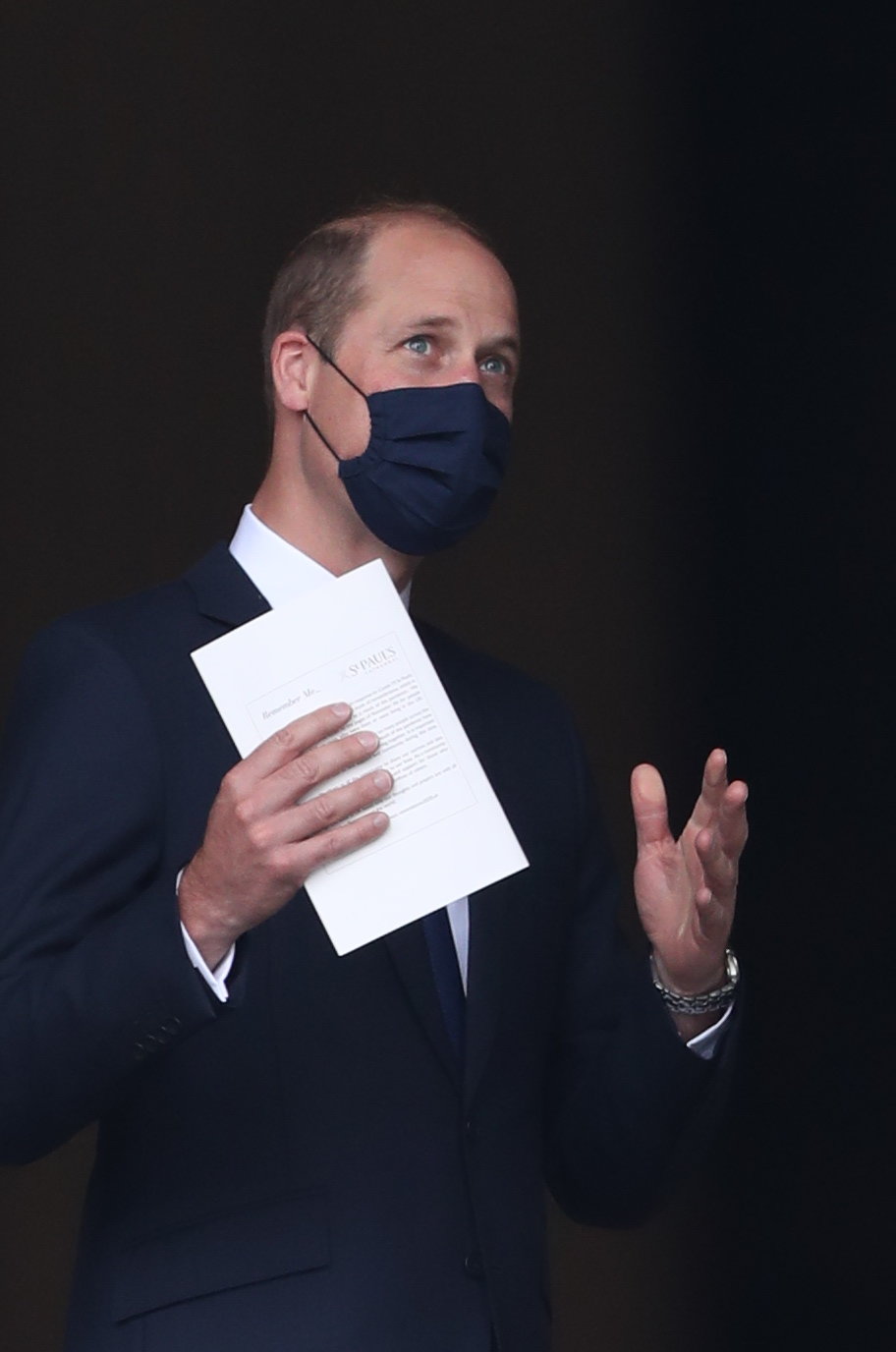 The Duke of Cambridge was snapped heading up the steps of St Paul's Cathedral in London to honour the work of frontline hospital and care home staff.

He took a front row seat before a choir dressed in white robes sang hymns to commemorate the occasion.

William followed religious leaders past rows of NHS staff who have kept the service afloat during the pandemic.

NHS England said staff would be placed "at the heart" of the socially distanced service.

Among the congregation is NHS England chief executive Sir Simon Stevens, matron May Parsons, who administered the first Covid-19 vaccination outside clinical trials, and Sam Foster, the nurse who gave the first Oxford/AstraZeneca jab.

Members of staff who treated the first Covid-19 patients in England and a number of patients who have been treated for the virus are there as well. 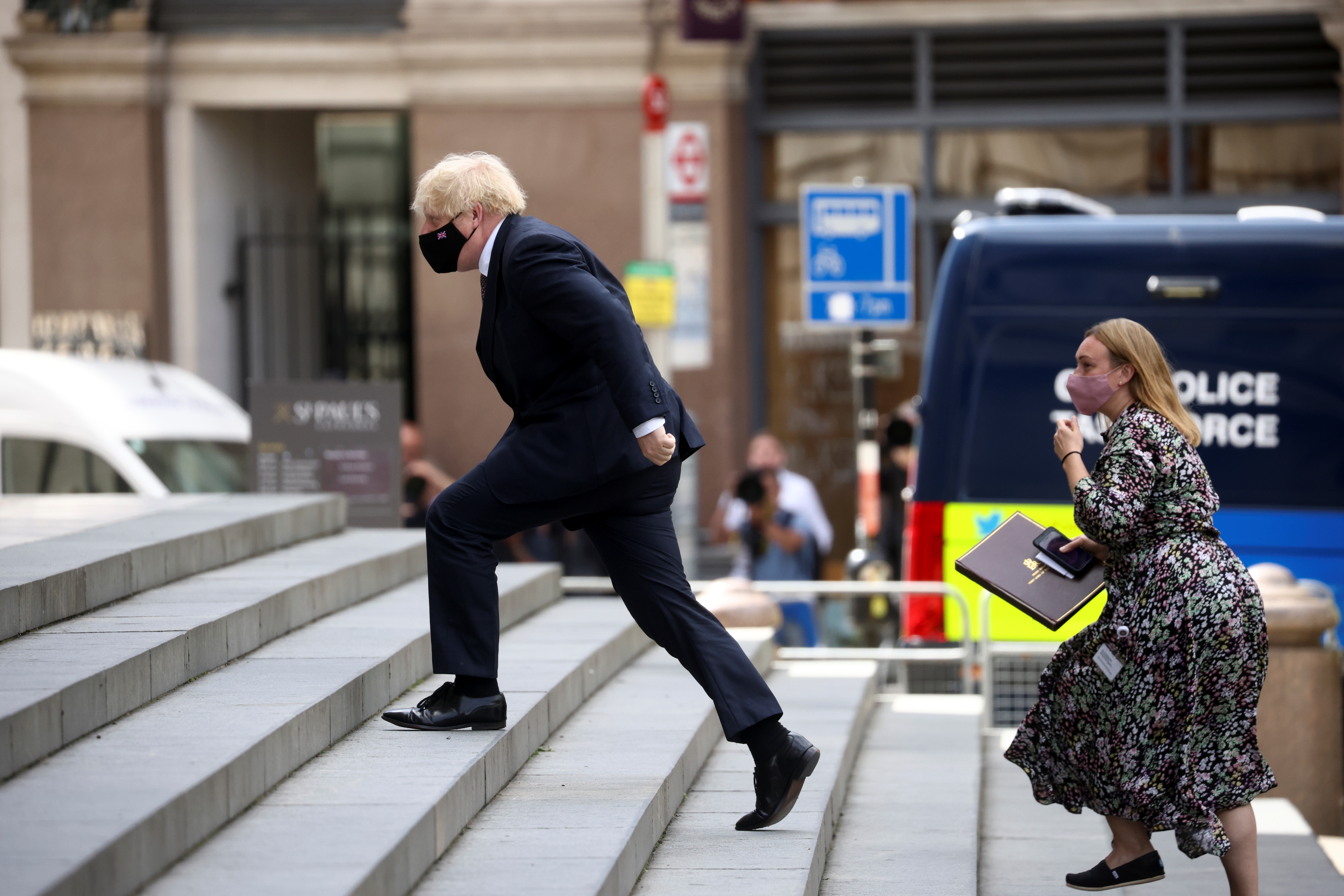 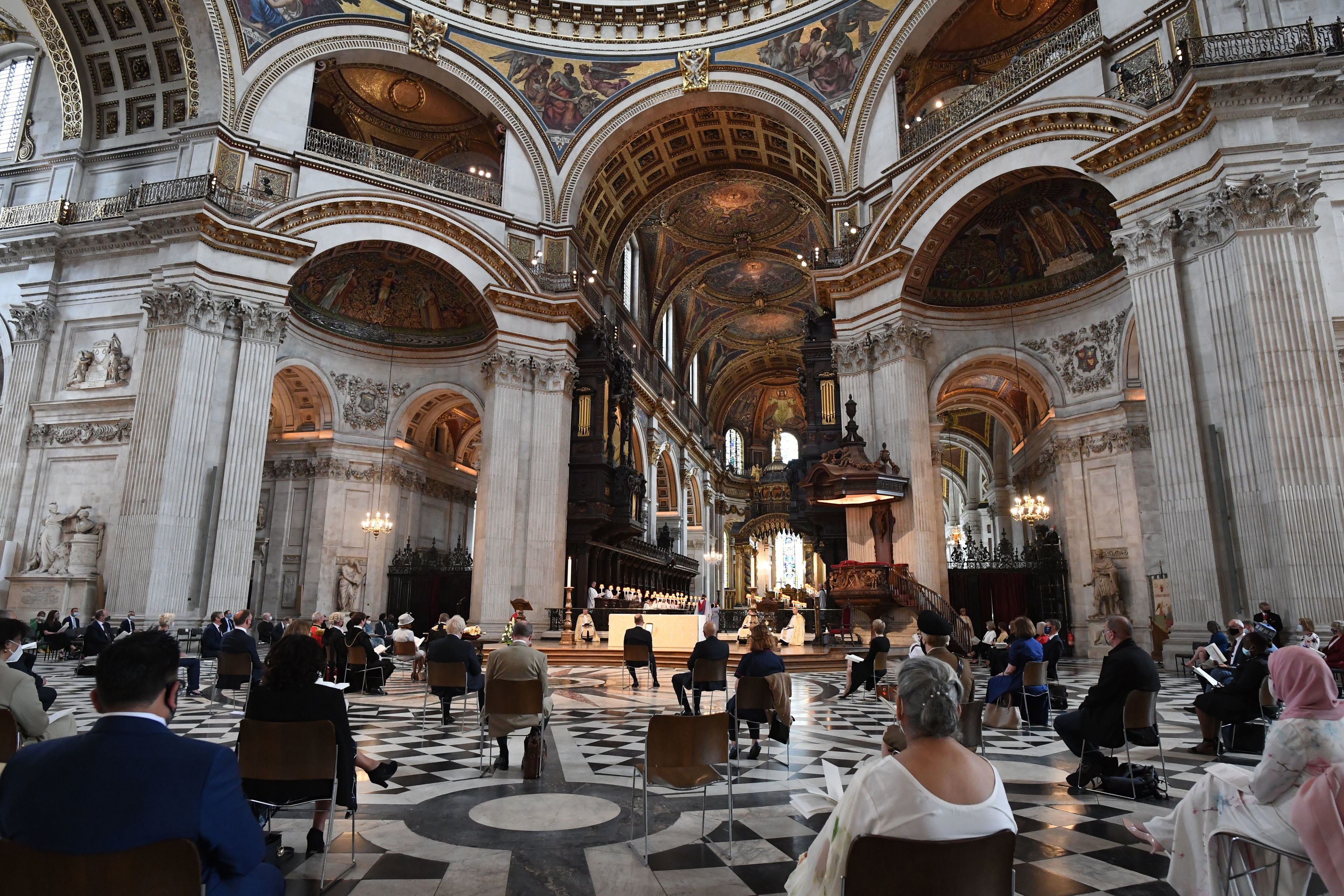 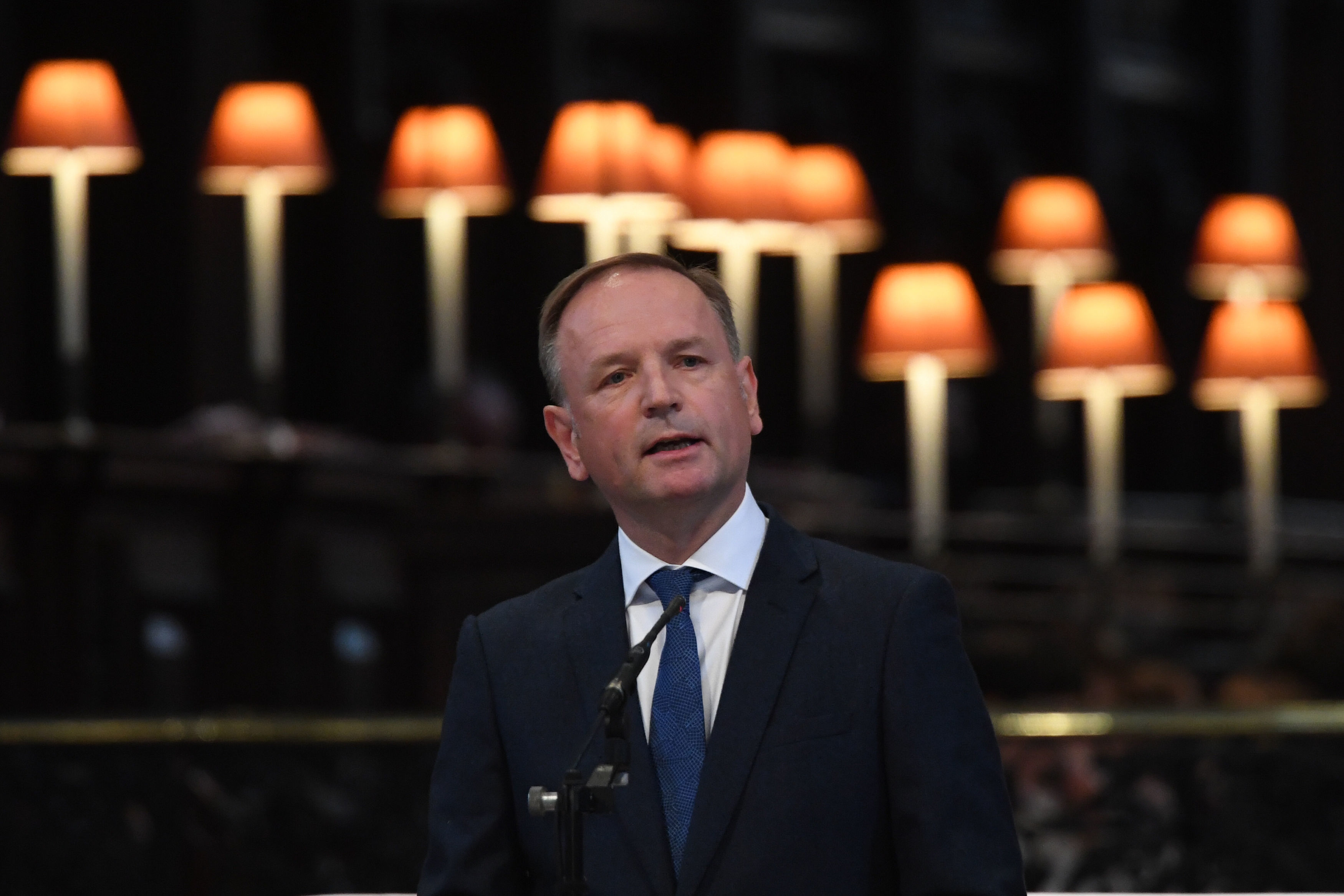 The Duchess of Cambridge was due to attend but was forced to cancel last minute due to a coronavirus scare.

Although not experiencing any symptoms, Kate, 39, is staying at home to follow government guidance.

She will have to isolate for ten days but it is not clear when the quarantine period started.

The service at St Paul's is followed by tea in the gardens of Buckingham Palace, which the duchess was due to host with her husband.

Instead, just the duke will meet staff ranging from respiratory ward nurses, counsellors and care workers, to those working in non-clinical roles including catering managers and housekeeping co-ordinators.

The NHS Big Tea, as the event is known, is organised by NHS Charities Together.

It is a national celebration of the health service, offering the opportunity for communities to come together for a moment of reflection and to thank staff and volunteers for the role they have played throughout the pandemic.

The event is one of thousands of Big Teas taking place on Monday in homes, hospitals, schools and community spaces across the UK. 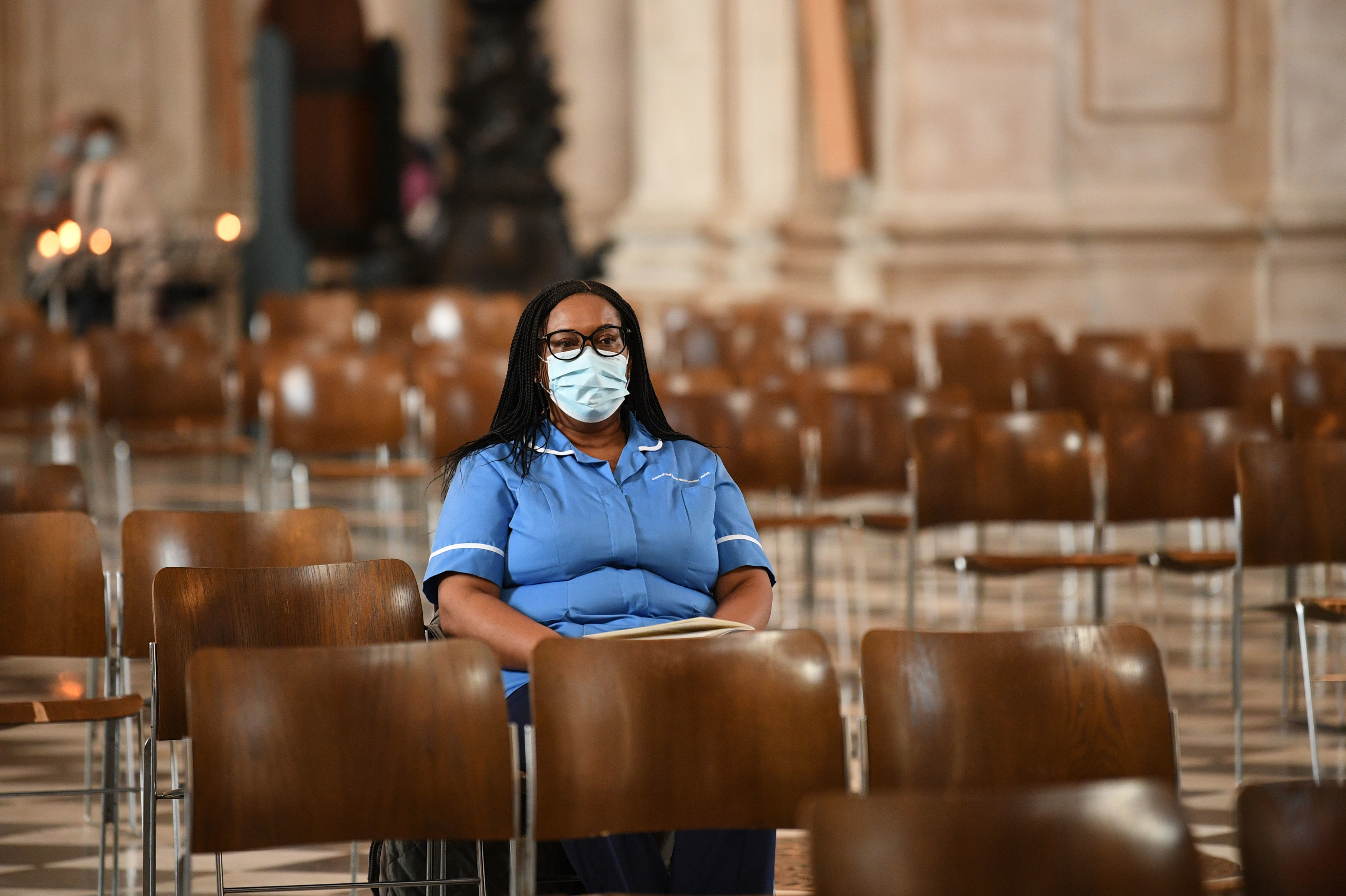 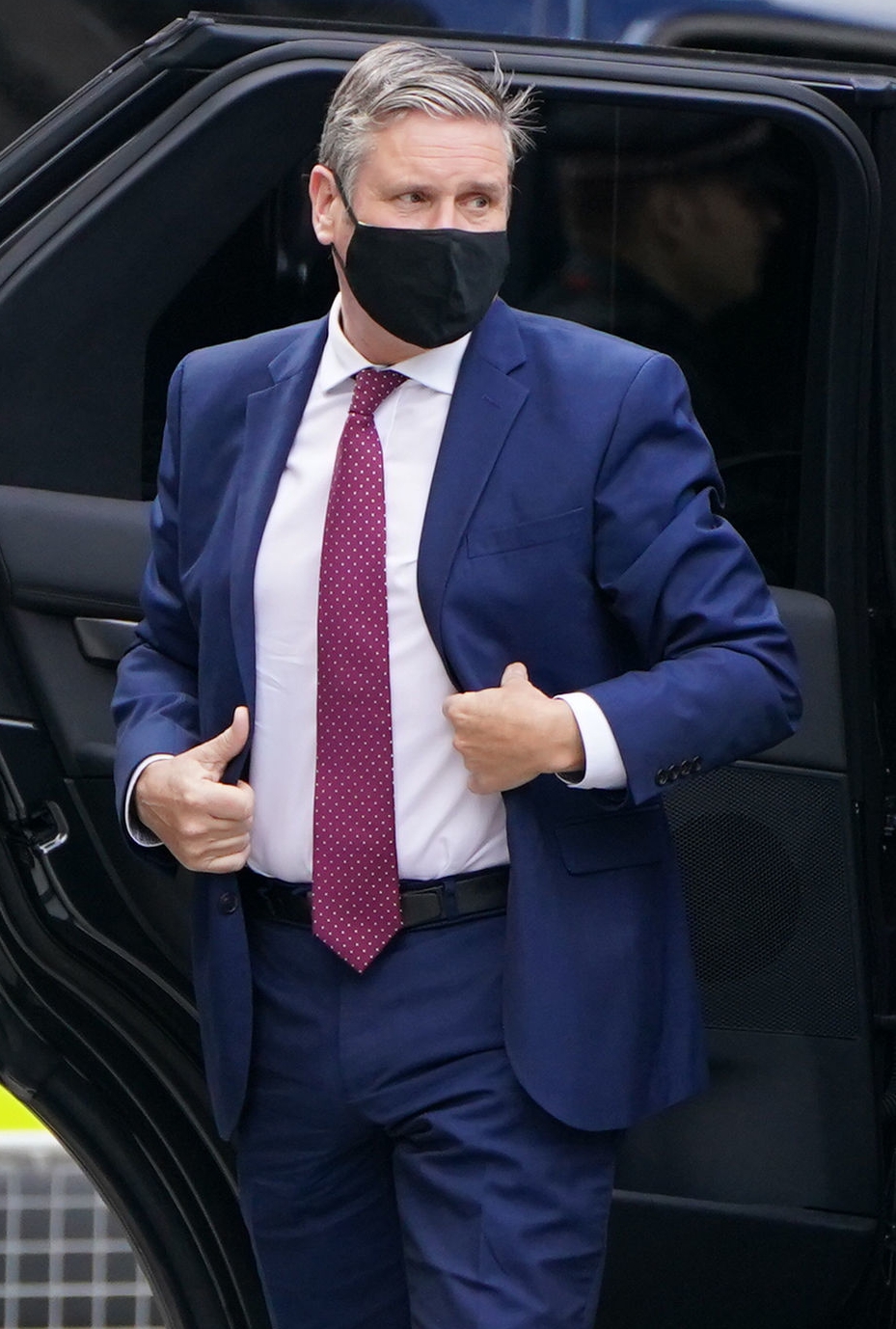 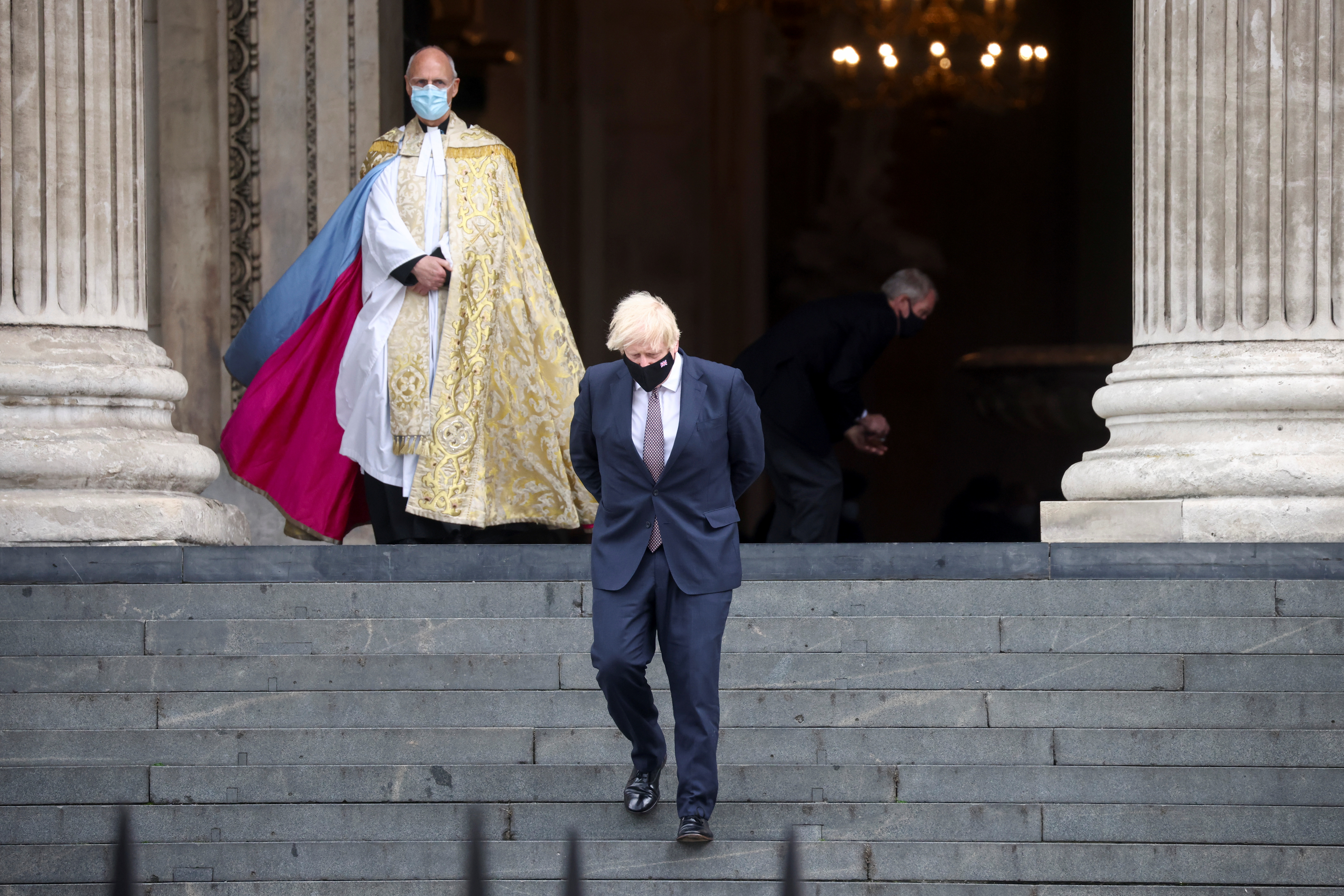 Alexandra Heys, nurse ward manager in the respiratory high care unit at Gloucestershire Hospitals NHS Foundation Trust, said: "The special tea at Buckingham Palace means a lot to NHS staff who have been through so much over the last year, and I feel so honoured to be meeting the Duke and Duchess of Cambridge today.

"I know from personal experience that the past year has taken a huge toll on NHS staff who have worked incredibly hard to take care of patients during a challenging time.

"My team at the respiratory high care unit has cared for over 300 very sick Covid patients, all of whom required dedicated around-the-clock care.

"All NHS staff have gone above and beyond, providing additional care in difficult circumstances, including connecting isolated and very sick patients with their families in their most challenging moments.

"We have all been through a lot, so seeing the public get behind the NHS Big Tea on such as massive scale is an immense boost and really makes a difference."

England footballer Jordan Henderson, who helped put his team through to the Euro 2020 semi-finals, said NHS staff are the "real heroes".

Henderson, appointed an Official NHS Charities Together Champion in January following his creation of the #PlayersTogether initiative, said: "After the last 16 months, this nation owes so much to the NHS and the least we can do this July is encourage everybody to express their collective gratitude for that selfless support.

"We know as footballers we are often the ones being looked up to, but this is about the real heroes so, from all of us associated with the England football teams, we raise our mugs for the NHS Big Tea with a simple message – thank you."

The Crown actress Olivia Colman said: "As ever, I am tremendously grateful for our heroic NHS, but even more so following this very peculiar year.

"We are so lucky to have our NHS, and today we will celebrate its 73rd birthday.

"There is much to celebrate, but also much to be aware of as we try to recover from the past year.

"It's our turn to care for our NHS staff and show them all the love and respect we can, by raising money for the support NHS Charities Together provides."

NHS Charities Together is the independent national charity partner of the NHS and an umbrella organisation made up of 240 NHS member charities based within hospitals, mental health trusts, ambulance trusts, community health trusts and health boards across the UK.

William and Kate became its joint patrons in December 2020.

NHS heroes were today also awarded the highest civilian honour for bravery on behalf of a “grateful nation”.

Today, on its 73rd birthday, the entire organisation receives the George Cross from the Queen.

Her Majesty, 95, said the gong is not only a reward for Covid-19 heroics, but honours all of those who have served in the NHS.