London: The Duke of Sussex will return to California without having a private meeting with his father, according to sources.

Many family members had hoped the pair would take the opportunity to spend some time together alone, to air their differences face to face.

But despite a 16,000 kilometre-trip, Prince Harry was either unable, or unwilling, to pin down the Prince of Wales, who is still coming to terms with the death of his father. 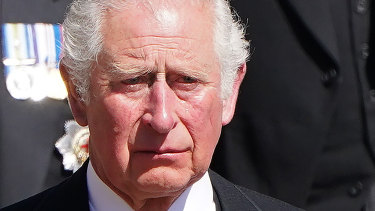 Prince Charles with other family members follows the coffin of Prince Philip. Credit:AP

While the Harry’s travel plans have not been disclosed, he is thought likely to return home to his pregnant wife, the Duchess of Sussex, 39, and their son Archie, who turns two next month, within the next day or two.

The lack of any time spent with his father suggests that feelings over his Oprah Winfrey interview are still running high and the fallout remains raw.

Having quarantined for the requisite five days after landing in the UK last week, ahead of the Duke of Edinburgh’s funeral, Prince Harry would have been able to abandon self-isolation on taking a private coronavirus test under the “test to release” scheme. 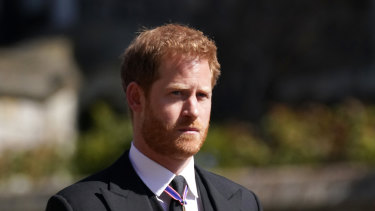 Prince Harry arrives for the funeral of Prince Philip, Duke of Edinburgh.Credit:Getty

He is thought to have had at least two days following Saturday’s service in which to catch up with friends or family members. Should relations have thawed sufficiently with his brother, he would certainly have liked to catch up with his young nephews and niece – Prince George, seven, Princess Charlotte, five and Prince Louis, who turns three on Friday.

The two elder children return to school following the Easter holidays today, meaning they would have been back in London yesterday, should such a visit have been an option.

Prince Harry is also particularly close to his cousin, Princess Eugenie, who is thought to be staying with her parents at Royal Lodge, not far from his Frogmore Cottage base on the Windsor estate, and who has recently given birth to her first child, August.

He may also have wanted to take the opportunity to see friends, or hold meetings with some of his remaining UK-based charities, which include WellChild and the Invictus Games Foundation. 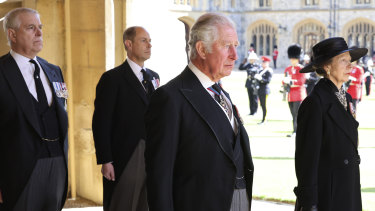 From left, Prince Andrew, Prince Edward, Prince Charles and Princess Anne during the funeral of Britain’s Prince Philip inside Windsor Castle in Windsor.Credit:AP

Prince Charles, 72, was said to have been furious about the Sussexes’ decision to discuss private family matters on television and “let down” by his son and daughter-in-law.

A source close to him said the “incendiary” interview had caused pain and division and that trust in the couple had been eroded.

“It goes against everything the Prince of Wales believes in. He believes diversity is the strength of our society,” one source told a newspaper.

“The Duke of Sussex continues to say he respects his grandmother, but he has ridden roughshod over the institution she represents.”

While the Prince Harry and Prince William made a point of chatting together as they strolled back up the hill from St George’s Chapel following the funeral on Saturday, Harry was not seen interacting with his father.

They are thought to have spent at least an hour together, alongside other family members including the Prince William and te Duchess of Cambridge, following the funeral service, away from the cameras.

But many believe the damage caused by the Sussexes’ allegations about racism and mental health is so deep that chances of meaningful reconciliation in the short-term are slim.

A Buckingham Palace statement said of the claims that “while some recollections may vary”, the issues raised by the Sussexes would be “addressed by the family privately”.

Trump supporter is viciously attacked and doused in milkshake