A Ballarat mother and controverisal television identity Sam Newman are the latest people to be spoken to by police for allegedly encouraging Victorians to take part in anti-lockdown gatherings this weekend.

The moves are part of a crackdown by detectives on planned protests surfacing in regional parts of the state.

It comes as Family Food Fight contestant Fanos Panayides is identified as one of two men arrested and charged with incitement on Tuesday over Saturday's planned protest for Melbourne's CBD.

On Wednesday, Newman took to Twitter to reveal police had visited to advise "against protesting".

Just hours earlier, a 28-year-old pregnant woman live-streamed her arrest on social media after detectives descended on her Miners Rest home armed with a search warrant.

After being told she was under arrest, the woman, who was wearing pink pyjamas, began to cry and told officers she would “happily” delete her social media posts as police made demands for her mobile phones and computer equipment.

A police spokeswoman said they had become aware of a prohibited gathering being planned for Ballarat on Saturday and warned anyone thinking of attending the protest that they could expect a swift and firm response from police. 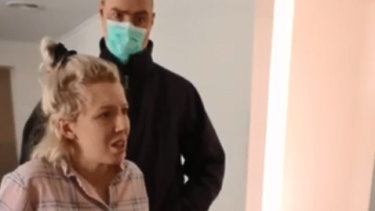 “Police executed a search warrant at a Miners Rest address this afternoon and a mobile device was seized. As a result, a 28-year-old female has been charged with the offence of incitement and has been bailed to appear at the Ballarat Magistrates Court on January 25,” they said.

“Any gathering of this nature is in blatant breach of the Chief Health Officer’s directions and puts Victorian lives at risk.

“We will have no hesitation in issuing $1652 fines to anyone who is breaching the restrictions on the day, or making arrests if necessary.”

The woman's Facebook page includes links to a “peaceful, freedom day” protest in the centre of the regional city on Saturday. The event itself has since been removed from Facebook.

It followed the arrest of two men earlier this week who had since been charged with incitement for allegedly encouraging others to take part in a prohibited anti-lockdown protest in Melbourne’s CBD this weekend.

A 28-year-old Coburg man, identified as Mr Panayides, and a 38-year-old Epping man were later released on bail to appear in court in February.