Snap decision: Policeman stops traffic to let huge crocodile walk across busy road to get back its lagoon in Mexico

This is the moment kindhearted cops stop the traffic on both sides of a busy road to let a huge crocodile cross the street.

The bulky beast is well known in the area and has been named ‘Juancho’ by local residents.

He was spotted trying to get back across a busy road to Carpenter’s Lagoon the city of Tampico in the north-eastern Mexican state of Tamaulipas where he resides.

The crocodile was filmed by motorists crossing the Boulevard Fidel Velazquez road, with one clip going viral on Facebook with 937,000 views.

In the video, queues of traffic can be seen lining as the croc casually walks across the road as the traffic is stopped on both sides by a uniformed officer.

A woman is heard saying in the background: ‘No way! Look, it is crossing!’

Meanwhile, dozens of stunned residents stand nearby and film the scenes with their phones. 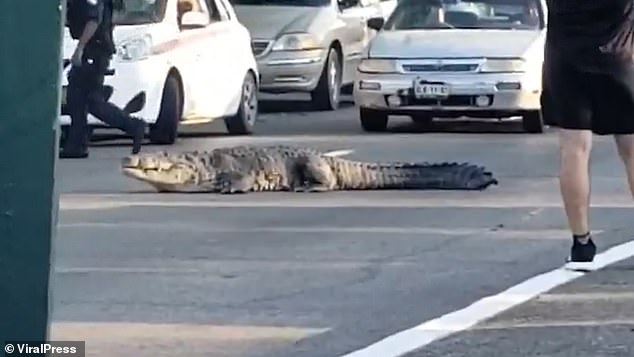 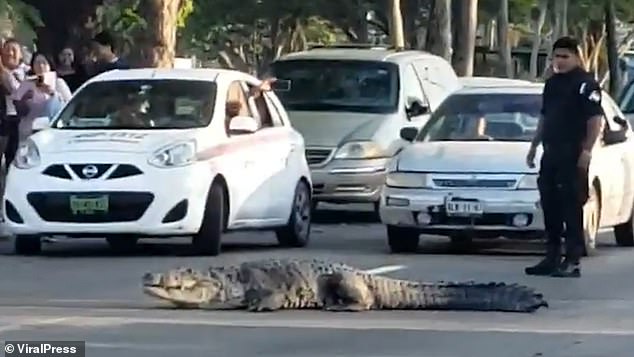 According to local media, Tampico firefighters arrived on the scene to help the massive reptile return to the nearby lagoon.

It is believed the crocodile left the lagoon during night and wanted to return to cool off from the sun.

Civil Protection coordinator Pedro Granados confirmed that the croc was returned without incident, saying: ‘There was not a problem, it was helped back into the water.’

Famed late crocodile hunter Steve Irwin once visited Tampico’s lagoon as part of a project to help solve the diminishing crocodile population in the area. 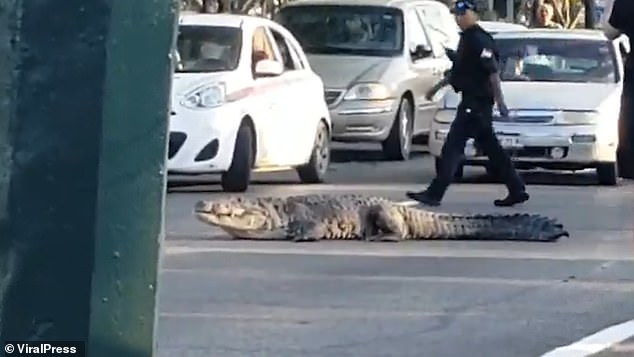 ‘Appalling’: Hunters in Wisconsin kill more than 200 wolves in less than three days