Homicide squad detectives are appealing for information as they work to identify three people wanted over the fatal assault of a teenager at a party in Melbourne’s south-east last month.

Jason Langhans died in hospital on Saturday following a fight involving multiple people at a 16th birthday party in Tooradin about 2.30am on Sunday, March 21. 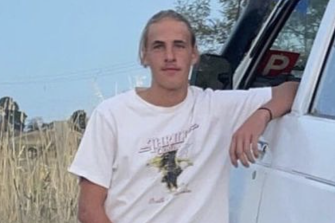 On Thursday, police released descriptions of three people wanted over the attack.

Police believe that the trio, who were not invited to the party and were not known to the wider group of guests, first arrived with a guest toward the end of the evening.

As guests were leaving and milling out the front of the home a minor confrontation occurred between the trio and another guest who had asked them to leave, police said.

Investigators believe Mr Langhans was in the vicinity of this confrontation when he was assaulted to the head, without provocation, with a thin implement police described as similar to a screwdriver.

Homicide Squad detectives are investigating reports a group of men became “involved in an incident” with Mr Langhans which escalated to a physical brawl.

The 17-year-old from Cranbourne North was taken to hospital with life-threatening injuries but died more than three weeks later in intensive care.

The three men involved in the confrontation were chased from the property by a core group of guests before they disappeared into the grounds of nearby rural properties.

Police believe another brawl occurred on the grounds of one of these properties.

After speaking to a number of guests at the party, detectives are still appealing to anyone with information to come forward.

In particular, detectives are seeking information about the offenders, the second altercation that occurred on a nearby property and the type of weapon used on Mr Langhans.

Police say a number of people were in the area at the time of the assault.

The three men are believed to be of driving age and are not from the surrounding area, according to investigators.

The first man is approximately 170cm tall, has dark, short-cropped hair and was wearing dark clothing.

The second man is also approximately 170cm tall, has wavy black hair which was brushed across his face and was also wearing dark clothing.

The third man is also described as about 170cm tall, has a dark short crew cut and was wearing dark clothing. Police believe he will have visible injuries to the left side of his face.

Homicide Squad Detective Inspector Andrew Stamper said from the information police have so far, the assault appears to have occurred without provocation.

“Our investigators have been working hard to identify the trio we believe are involved, but we now need further information from the public,” Detective Inspector Stamper said.

“There are people in the community who will know who was involved and who will have information that can help; we urge you to come forward with any details.

“I can’t even imagine what the Langhans family must be going through, to find out that your son and much-loved brother, who just went out to a party, will no longer be coming home.

“To the friends or guests who chased the trio away, who would have been just trying to look out for their friend, we’d like to hear from you to help establish the circumstances of what occurred and you may be able to help us find the weapon involved. 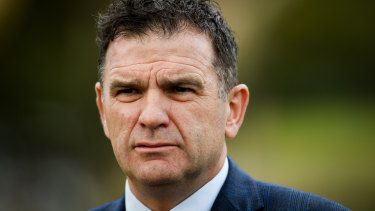 The head of the homicide squad, Inspector Andrew Stamper.Credit:Justin McManus

“These men need to be held to account for their actions.”

Mr Langhan’s mother, Carolyn, said she and Jason’s father, Paul, had watched their son take his last breath on Saturday.

“Jason you were our whole life and not a day will go by without us thinking about you and wishing you were here, we love you so much and our lives feel so empty,” she wrote in a public tribute on social media.

“You put up a good fight but unfortunately it was your time to go and now you’re no longer in any pain.”

Friend Jason Canal said he was in disbelief that his mate was gone.

“RIP Jason, I’m lost for words … it kills me to hear that you aren’t here with us anymore and that we can’t go fishing together like we always talked about,” he posted on social media.

“My heart’s aching [at the moment] and I’m in so much disbelief, it’s so unfair what’s happened. I love you heaps, fly high brother.”

After Biden's failure in Iowa, top Democrats are terrified Bernie Sanders will do to them what Jeremy Corbyn did to Labour in the UK