NSW Police have released a series of images as they search for the alleged culprits of four sexual offences on Sydney public transport last year.

Police are urging the public to examine the images of the four men and contact Crime Stoppers if they recognise any of them.

The incidents took place between Strathfield and Penrith from July to December 2022. 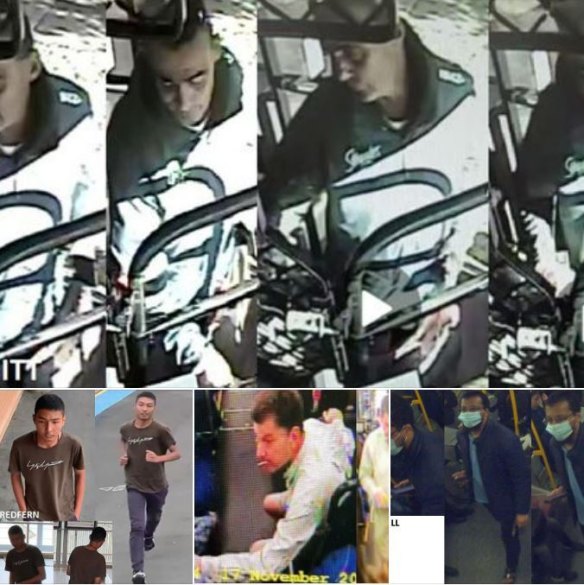 Police are urging anyone who may be able to identify the alleged offenders to call Crime Stoppers.Credit:NSW Police

The first alleged incident took place about 1pm on July 9 when a man boarded a bus at the Mount Druitt bus interchange. He allegedly exposed himself and performed a sexual act in front of two women.

Police said the man was of Caucasian appearance, in his 40s, with a thin build and grey hair. He was wearing dark blue track pants and a zip-up jacket with a “Steggles” logo on the front.

In a separate incident, about 10.30am on November 5, a man boarded a train at Town Hall. He allegedly touched the thigh of a woman he was sitting next to several times.

Police said he was of subcontinental appearance, believed to be in his 30s and with short dark hair. He was wearing a navy jacket, light blue shirt, dark sandals and glasses.

In the third incident, a man boarded a bus at Strathfield about 8.25am on November 17. He allegedly touched the knee of a girl in a school uniform.

He is described as being of Caucasian appearance, believed to be in his 40s and had brown curly hair. He was wearing a light green long-sleeved shirt and cream cargo shorts.

On December 29 about 11.30am, a man allegedly approached a woman travelling on a train between Redfern and Penrith and touched her breast.

Police said he was of Asian appearance, aged 20 to 25, of thin build, about 165 centimetres tall, clean-shaven and with dark hair. He was wearing a dark green T-shirt, long blue pants and black Nike shoes.

“Anyone with information about these incidents is urged to contact Crime Stoppers on 1800 333 000,” police said in a statement.

Back to WFH: Bosses slam 'absurd' guidance telling people to stay away

Lisa Marie Presley, the only child of Elvis, dies at age 54

Noel Clarke suing Bafta for defamation after membership was suspended