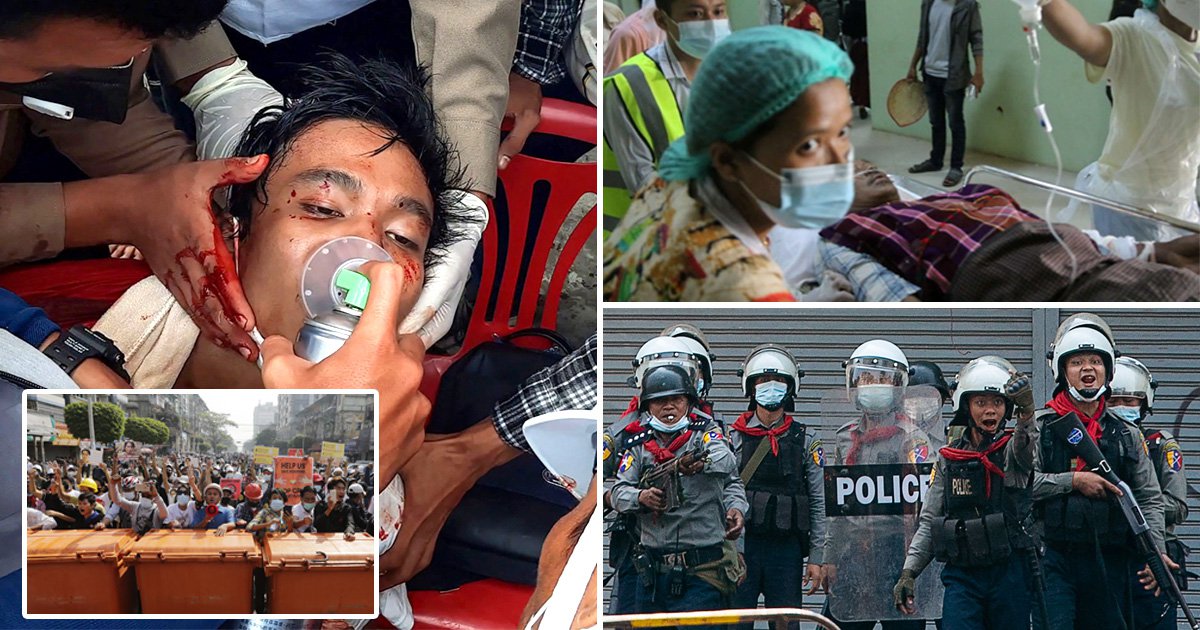 At least 18 protesters have been killed and 30 wounded by police during demonstrations against a military coup in Myanmar, according to the UN.

They said: ‘Deaths reportedly occurred as a result of live ammunition fired into crowds in Yangon, Dawei, Mandalay, Myeik, Bago and Pokokku. Tear gas was also reportedly used in various locations as well as flash-bang and stun grenades.’

It comes a month after the military staged a coup on February 1, sparking mass protests across the nation.

There were reports of gunfire as police in Yangon, the biggest city, fired tear gas and water cannons while trying to clear the streets of demonstrators demanding that the elected government of Aung San Suu Kyi be restored to power.

Photos of shell casings from live ammunition used in assault rifles were posted on social media, adding to evidence that live rounds were fired.

Today’s violence erupted early in the morning when medical students were marching in Yangon’s streets near the Hledan Centre intersection, which has become the gathering point for protesters who then fan out to other parts of the city.

Videos and photos showed protesters running away as police charged at them and residents setting up makeshift roadblocks to slow their advance.

Nearby, residents were pleading with police to release those they picked up from the street and shoved into police trucks to be taken away.

Dozens or more were believed to have been detained.

There was no immediate word on Yangon casualties.

Sounds of gunfire could be heard in the streets and there were what appeared to be smoke grenades thrown into the crowds.

The junta said it took power because last year’s polls were marred by massive irregularities.

The election commission before the military seized power coup had rejected the allegation of widespread fraud.

The junta dismissed the old commission’s members and appointed new ones, who on Friday annulled the election results.